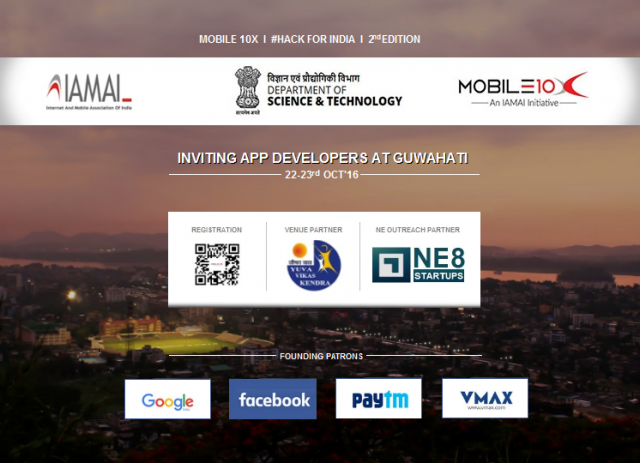 The Mobile10X hackathon, a unique initiative from IAMAI (Internet and Mobile Association of India) comes to Guwahati for its second edition specially curated to search and support quality App developers in India (http://mobile10x.in).

As a part of the program, Mobile10X conducts Nation Wide Hackathons “Mobile10X #HackforIndia Version 2” (http://hackforindia.in)  and in its present edition we are targeting smaller towns over multiple weekends in Sept/Oct 2016.The Department of Science & Technology, Govt. of India and Facebook are partnering with IAMAI on this initiative.

The concept of #HackforIndia is to support & showcase potentially great Ideas/Talent from Inner India, which is done by reaching out to developers/entrepreneurs/start-ups in their own city, helping them develop their idea/product to a minimum viable stage, after which it can be evaluated by an esteemed jury and can be further selected for attractive Prizes as well as incubation support/seed funding.The winners will get the opportunity to demonstrate their apps to the Mobile Industry leaders and Jury members at a large event in New Delhi in the month of Dec 2016. There are prizes worth Rs 5 Lacs to be won in this competition.

Guwahati is also among the selected cities where we are conducting this Hackathon on 22nd and 23rd of October 2016 and the Hackathon will be held at YUVA VIKAS KENDRA near Kalibari, Amingaon Guwahati, Assam-781031 non-stop for 24 Hours and the participant will be asked to submit his/her prototype/App for screening and evaluation for Prizes and future support.

Regsitrations for inviting app developers from Guwahati & Northeast India are currently on at: http://bit.ly/2cWRo8R .The Guwahati edition is brought to you by Mobile10X I DST I IAMAI with NE Outreach Partner: NE8 Startups, Venue partner: Yuva Vikas Kendra under the aegis of the founding patrons:Google India I Facebook I Paytm I Vmax