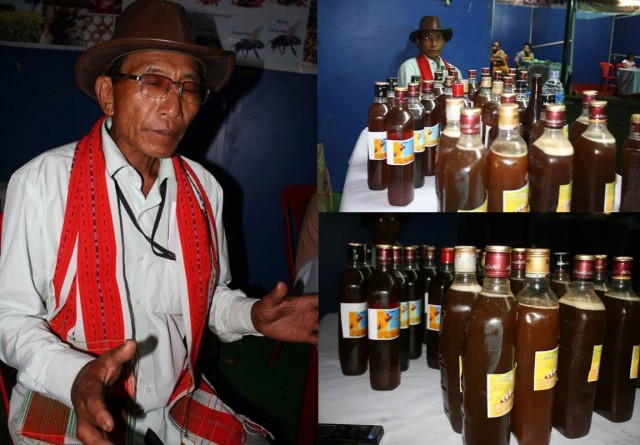 For MR Wonmi from Thoyii village in Ukhrul district, Bee farming has been a thriving business for the last 20 years which enables him to fetch a good income to maintain a comfortable living. The 58 years Bee farmer hailing from a remote hill village in Ukhrul district has been carrying on with his bee farming for the last 20 years. His village is around 30 kms away southernward of Ukhrul town.

Genesis of the Bee farming venture

Highly motivated by his bee farmer friend in Imphal who runs his family with sufficient income from the business, Wonmi initiated his Bee farming enterprise with only two bee boxes at his farm locally known as Pamlou where varieties of green vegetables, seasonal crops are grown. With the income earned from selling the seasonal crops in the local market failing to maintain his family, he adopted bee farming apart from his seasonal crop cultivation with two Bee Boxes on trial basis. Buoyed by the initial success in the farming with commendable profits from honey harvest, he increased the number of Bee Boxes from two to 10, then 20, 30 to 50 step by step.

Being the president of Ukhrul District Bee Farmers Federation having about 195 Bee farmers, the Bee farmer is contributing a key role towards endorsing honey Productivity in the state. The federation office is located at Thoiyii village where all bee farmers of Ukhrul district congregate and discuss their activities.

Wonmi said that Bee keeping has supported him a lot. With the income earned from the business, he can afford school fees of his daughter as well as maintenance of his family comfortably. With exception to some Bee Boxes provided by Horticulture dept, he has not received any financial assistance from the Government till date.

Special cares to be taken in bee farming

With the Bee Boxes provided by the Horticulture department lacking in quality, they are not usable since the bees do not like to live in it. Bee Box made of woods locally known as Uningthou and Tera is the best choice or home for Honey Bees where they prefer to live in since the boxes made from these particular woods are neutral and odorless. Bee boxes cannot be made with any available woods. However, the boxes supplied by the Government department concerned are made with any available woods and poor quality, he said  He said that the bee boxes should be kept neat and clean all the time not to allow entry of ants, reptiles in the bee box, maintained he.

Bee farming a lucrative business for self employment now

With the demand of honey yield is on the rise in the state and outside, Bee keeping has been a lucrative business with good profits. The current gross honey yield harvested by a few bee farmers cannot meet the honey requirement in the state. Believe it or not, a Bee keeper can equally earn a good income as that of a Government employee. When the income from bee farming equals to that of a paid Government employee, then why should we run from pillar to post for white collar jobs, stated Wonmi.

He revealed that each Bee box comprises 7 to 8 hives which can harvest around 15 to 20 bottles of honey in a year during the flowering seasons of Monsoon and Winter  by extracting 10 to 15 times. Honey harvested during monsoon season is known as Langban Khoihi. Winter season gives best quality honey and good yield. If a Bee farmer keeps 100 bee boxes, the income he can fetch will not be less than that of a Government employee.

Unlike other manufacturing industries which requires huge investment, heavy machineries, production capacity and manpowe, Bee farming does not need all these. One can take up bee farming anytime comfortably with some wooden bee boxes and knowledge in the field since bee farming requires less time, investment, manpower and infrastructure. A Farmer can initiate such business with small capital investment, he said.

Demand of honey in market

Motivating those people aspiring to be a bee farmer, Wonmi said that he sells the honey yield he harvests at the present local market value of raw pure honey ranging from Rs.200-350 a litre. Demand of Honey which is considered to have medicinal value is on the rise nowadays with the number of honey consumer increasing by leaps and bound. Since the current gross honey yield harvested by the limited local Bee Keepers cannot meet the increasing demand of honey, demand exceeds supply and bee farmers need not worry for market. As such, bee keeping has now become a lucrative and thriving profession in Manipur. On the one hand, demand for locally produced pure honey which is considered to have more quality is high in the Market.

When the youths of the state take up bee farming which is a viable way out for self employment rather than looking for only white collar jobs, problems of unemployment can be minimized and they can earn a good income apart from contributing to the state economy by exporting the surplus honey yield to outside, he observed.