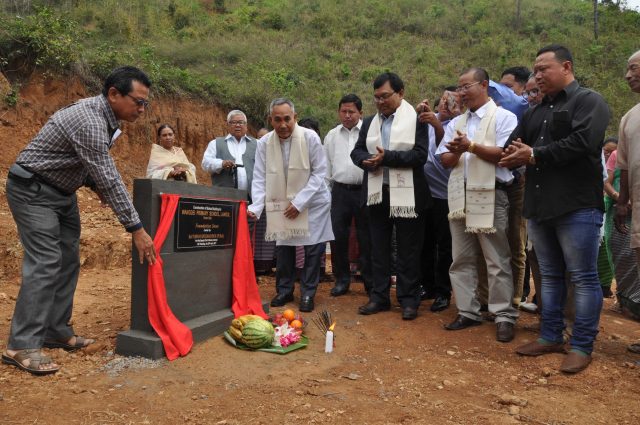 Imphal, the 20th April 2017, (DIPR): Deputy Chief Minister Shri Yumnam Joykumar has said that it is time to restore the earlier teaching system in government schools in the State.

After laying the foundation stone for the construction of Wangdei Primary School at Langol in Imphal West today, Deputy Chief Minister said, teaching method in Government Schools in the past was very effective as homework, class work and weekly examinations were conducted regularly. But in modern days, it has been diminished due to many reasons. He said, teacher-pupil ratio in most of the government schools are also need to be checked as teachers outnumbered against the students in some schools. School Management & Development Committee should also play a pivotal role to check the system at all.

Recalling his early days while he was in Government school, Shri Y. Joykumar Singh said, in those days students from government schools stood premier positions in most of the competitive examinations because the teaching system in those days was very effective. Therefore, that all stakeholders should co-operate to ensure a good system in the days to come, he added.

Expressing concern over the tuition culture and mushrooming of private schools nowdays, he said, it cannot make the students self-reliant in problem solving and other learning methods. He exuded confidence that the primary school which is to be constructed under Sarva Siksha abhiyan (SSA) will cater the need of students in Langol Area.