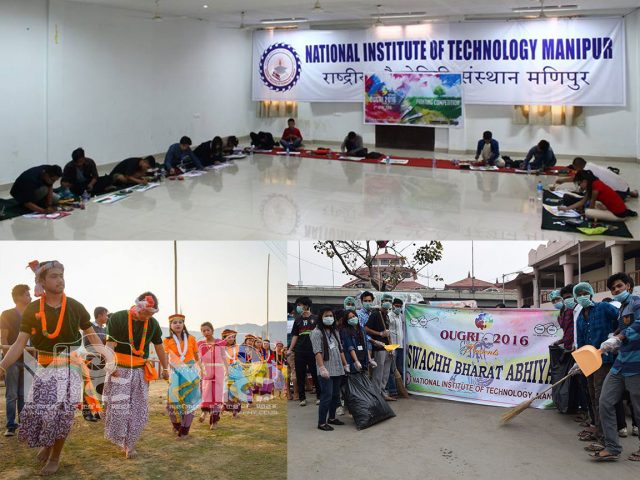 The President of India is the ex officio visitor of all the NITs. The NIT Council works directly under him and it includes the minister-in-charge of technical education in Central Government, the Chairmen and the Directors of all the NITs, the Chairman of University Grants Commission (India), the Director General of CSIR, the Directors of other selected central institutions of repute, members of Parliament, Joint Council Secretary of Ministry of Human Resource and Development, nominees of the Central Government, AICTE, and the Visitor. NIT Manipur started its first academic session in 2010 at the temporary residence Takyelpat inside the Govt. Polytechnic campus. It is one of the ten newly set up NITs by the Ministry of Human Resource Development, Govt. of India vide its order no. F.23-13-2009-TS-III dated 30th October 2009 and 3rd March 2010.NIT Manipur was declared as a full-fledged NIT along with nine other new NITs, through An Act of Parliament and notified under Govt. of India Gazette notification No. 28 of 2012 dated 7th June 2012 and declared as an Institute of National Importance.

OUGRI is the cultural and technical festival of this prestigious institute which is organized every year in the month of March (spring). It is a student-organized festival guided by a faculty member or a group of coordinating body of faculties. It was first organized in 2013. Since then, it has been organized every year with the addition/amendment of events each year. The term ‘OUGRI’ is derived from the roots of ancient Manipuri literature dated back to the dawn of the Manipuri civilization; also known as the Early Period/Pre-Hindu Manipuri literature extending up to 17th century. The Panthoibi-Khongkul, a manuscript of the Manipuri literature, gives an account of the religious and social festival ‘Lai Haraoba’, which many scholars believed to be part of the cosmological theory of creation in Meitei myth, where numerous songs are sung. Among these songs some of the significant ones are ugri’,’Khencho’,’Anoirol’ and ‘Lairemma Paosa’.

In view of their more archaic diction and much advanced historical allusions, ’Ougri’ and ‘Khencho’ are considered to be the earliest forms than the rest. In the manuscript Laisra Pham, a treatise on administration and social conduct, ‘Ougri’ is mentioned to be sung at the coronation of Nongda Lairen Pakhangba in 33 A.D.

Naothingkhong Phambal Kaba, another manuscript, mentioned that it was being taught by the Luwang king to the Meitei prince as a part of the Meitei lore, which according to the chronicle Cheitharol Kumbaba, took place just prior to 663 A.D.

The song is also known as Leiroi Nongloi Eshei. In the light of all these manuscripts of the Manipuri literature, it is being noted as the very core of the Lai Haraoba festival where the people re-enacting the acts of the Almighty and other divine beings believing that their pleasure is evoked and in return the mortals on the earth are blessed with happiness and prosperity. Many kings and priests sing this song or accompanying with dance on numerous occasions celebrating their conquests, coronation and prosperity.

Several months before the organization of the first ‘Ougri’ festival of NIT Manipur, the students of the institute were completely baffled to find a name for the festival which they were prepared to organize. A team of faculty members and students conducted a trial to find the best name for the festival. As the only Institute of National importance of the state and one of its kinds, the authority as well as students desired to keep a name which is of cultural heritage and traditional values to represent the region, which can define who we are where we came from and our origins to the whole nation and the world. It is a platform where everyone gets the opportunity to showcase their talents, skills, where students and artists all over the nation and abroad exchange their art and cultural beauties in the field of science, art, literature and technology. It is simply the vicinity where students, apart from its academics, learn the co-curricular activities, management in other fields, enjoying the happiness, progress and prosperity of their youth lives and educational career. At last, a few months to the first festival day, the organizing committee could find the best suitable name ‘Ougri’, a festival where the technical art progress meets with happiness and prosperity in cultural diversity. The organizers, first batch of the NIT Manipur B.Tech students, then third year, organized the first Ougri festival honoring the theme ‘Imagine Beyond’ in the year 2013 from 25th to 27th of March, a three day extravaganza with full of colorful cultural and technical events. The venue was at Takyelpat, Govt. Polytechnic Campus. With the introduction of a very special event ‘Blood Donation Camp’, the second Ougri, which brought to us with the theme ‘Rhapsody in Disguise’ in its heart, was organized successfully with the extension of one more day. Since then, every year at the advent of the four day extravaganza, usually two days before, the ‘Blood Donation Camp’ event is being organized, sponsored by the Lions Club of Imphal City, in the hope for contributing as much as possible to the society in terms of healthcare as well. The last Ougri at Takyelpat temporary campus, the third Ougri was also organized successfully keeping the theme ‘Beat the Tide’ in its heart. For the first time, within the walls of its permanent campus at Langol, the fourth Ougri was organized prosperously honoring the theme ‘Carnival of Serenity, in the calm and peaceful environment. Ougri’17, the fifth Ougri, presenting the theme ‘Tales of Ingenuity’, brought to us the one and only space agency of India, ISRO’s pride, Vikram Sarabhai Space Exhibition for the first time in the entire NE region. The event was such a great accomplishment and contribution to the people of Manipur and north-east for the organizers and the institute. It delivered us with numerous innovative ideas, motivation and inspiration to achieve and learn more in space technology. In the cultural essence, the fifth Ougri revived the ‘Ougri Hangen Chongba’, introducing the event at the inauguration day of the Ougri festival honoring the culture and tradition of the Manipuris.

Key events of Ougri are:

5 – Men Soccer, Blood Donation Camp, LAN gaming, etc. Since the organization of the five Ougri festivals till now, it has produced many talented academicians who have achieved greatly in the national levels, numerous artists and models who have pursued their careers in their respective art. Ougri is not only a platform to showcase their skills and talents but a stepping stone, a transition which will help them grow towards their future lives and career.