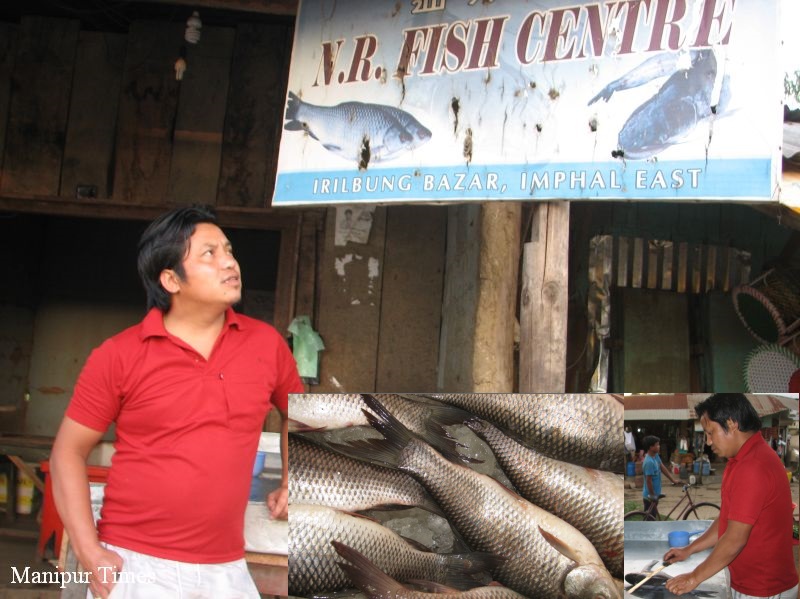 “I put in all I could to find a government job after completion of my graduate degree. It didn’t pay off. Neither did I have enough money to bribe the powerful politicians and officials.  Finding a job is the only dream a poor has in a state like Manipur. Seeing no possibility to find any white collar job despite many efforts, I finally gave up the idea of it and resorted to this fish business to maintain my family.”

Ningthoujam Romesh Singh, proprietor of NRS fish center, Irilbung bazar shares the journey of his life to Manipur Times in a recent interview.

Ningthoujam Romesh,33 years, son of Late N. Babural hailing from Keiraobitra Awang Leikai has been in the business of fishery at Irilbung Bazar for the past 6 years. He passed matriculation exam from Irilbung High School in 1995 and graduated from Maharaja Bodhachandra College, Imphal in Political Science. He has completed a training course on Hospitality and Tourism Management sponsored by the North Eastern Council.

The varieties of fish made available by NRS Fish Center are mainly procured from Loktak Fish Center, Hatta and SK Fish Center, Konungmamang through wholesale. Almost all the fish are imported from Assam, Andhra Pradesh and others. The fish center sells about 40 to 50 kg a day on an average. He enjoys good business during festivals such as New Year, Ningol Chakouba, Holi, Cheiraoba and other occasions like wedding ceremonies. He sells 200 to 300 kg during these occasions. Varieties of fish include Rou, Shareng, Ngahei, Ahella, Pengba, Ngapai, Ngakrijou. Presently, he sells Rou fish at Rs.130 to 135 a kg, Shareng at Rs.350 to 400, Ngahei at Rs.140 to 145, Pengba at Rs.150 to 160, Ngapai at Rs.170 to 180.

He said that his mother was running an eatery at Irilbung Bazar for many years to sustain the poor family. The hotel which was once a livelihood of the family was so popular known as “Mema Hotel” and many costumers still remembers the taste of pakora or the bora prepared by her. He helped his mother as a child.The day to day maintenance of the family was maintained with the income earned through the hotel. The eatery is closed as his mother is unable to work any longer because of her age.  The plot of the hotel has now been converted to a fish shop under the brand name NRS Fish Center.

Romesh is the youngest among the seven siblings of five sons and two daughters in the family. All his brothers has now their own business firms.

Every day, in the wee hours of early morning, I would get up and walked on foot upto Irilbung Bazar where our hotel was located. When I arrived there, I would torch the fire woods kept at the Phunga (fireplace) of the hotel kitchen to prepare morning tea, before arrival of costumers. We miss our customers when they are not served in time. It is my hotel experience for years. After the hotel work was over, I came back home and then attended school after taking lunch. I did not have time to go for tuition as almost my time was engaged with hotel works. I had time for reading, home assignments only at night, says Romesh recalling his past days.

“The present fish business receives a good turnover with which I am able to maintain my family to some extent. The real dream of my life is not this business but to do a while collar job. As the saying goes ‘Man purposes, God disposes’, I could not realise the dream I wished. Now I have to reconcile myself to my fate”, says Romesh.

“Looking for self-employment work is the best answer for unemployed youths of the state where the government failed to adopt any policy to solve the employment problem. In such a small state, more than seven lakhs unemployed youths have got their names registered with the employment exchange. What should we do in such a critical situation? Instead of sitting idle, blaming the government, we have to build up work culture so that we can employ ourselves. It has been an open secret or fashion in Manipur to bribe the top officials with 15 to 20 lakhs for getting a post of ASI in Manipur police. For mere police constable post, three to five lakh rupees are reportedly given to the top officials. Until and unless this system of bribery or corruption is uprooted from the soil of Manipur, getting white collar job is impossible for the poor,” Romesh observed.