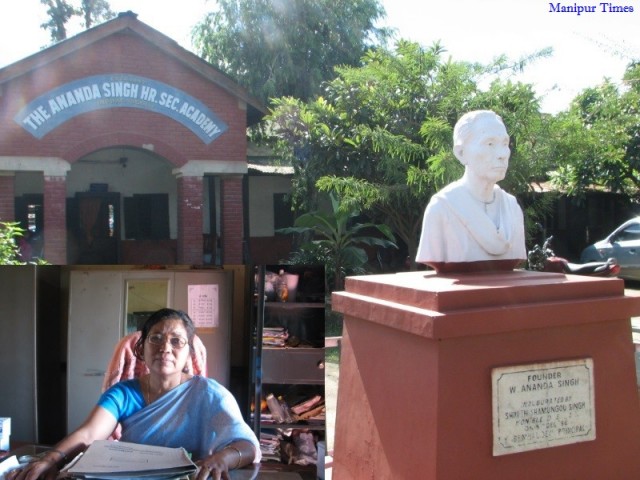 “In order to enhance the condition of government schools, every employee right from chowkidar, peon and clerk to principal need to be dutiful. Role of parents is also another important factor. However, most of the parents hardly visit government schools to have discussions with teachers about their children’s progress. But we must understand that teachers and parents have different but significant roles to play towards producing meritorious students”.

Sumati Devi is a National Awardee. Pratibha Devisingh Patil, President of India honoured her with the prestigious National Award in 2010 in recognition of her contribution as a teacher. Directorate of Education (Schools), Government of Manipur also conferred her State Award in 2010.

Historical Background of the Academy

With the involvement of some dedicated persons of Nongmeibung locality who were interested in developing education system in Manipur, Ananda Singh Higher Secondary Academy was established on 15 October, 1947. The school has now completed 66 years of its existence.

The story of the school traces back to the time of World War-II. When people of that time returned home after they fled home due to war, they found most schools remained closed for long.

It was at that time when late Wangkheirakpam Kanhai Meetei and Ngangbam Amuba, as private tutors, taught about 15 students at the latter’s  Mamang Sangoi (extended house)  located at Nongmeibung.  In due course of time, enrolment of students from other localities increased to a great extent day by day that led to feel the need of setting up of a school in the village. With the contribution from the people of the locality, a thatched school building with three rooms was built at Nongmeibung village. The tuition centre was shifted to the newly built school. Late Wangkheirakpam Kanhai, Ngangbam Amuba and Irom Rashi were some of the pioneer dedicated persons who took great role in setting up the school. Sometimes, they even bought pen, pencils exercise books for poor students.

In due course of time, the school needed to be upgraded to a high school. Then a public meeting of the locality was held at Checkon ground. A school committee was formed with Thongram Mani Singh as the secretary of the committee. Checkon Bazar Board dedicated a piece of land in the name of the school. Later, the school became an ME school when late Chongtham Tombi Singh became the headmaster. After some years, the school became a full-fledged high school in 1949. Laishram Achou Singh managed the school as principal from January 1950 to September 30, 1954.

During Mr. Fukan, the then DC, Imphal, the school got the land of Anath ashram as its own. In 1953, Government provided the school with an annual lump sum grant of Rs.250. The school then started receiving 90 percent grant-in-aid from 1957. Then the school had to undergo a bad phase. As there were less people to fund the school, daily newspaper copies of the school were not thrown away. The newspaper copies along with the answer scripts of exam were sold out and the money was kept as school fund. It continued up to 1978 before the school became a government school. The then school management committee managed to raise fund with selling out the paddy crops harvested from the paddy fields of the school located at Porompat. With such savings, the school could manage to have its own library. Unfortunately, the library building was burnt down during agitation of foreigners issue in 1980.

To bring out more meritorious students, scholarships were provided to the students who secured 60 percent in the school exam. Students of the school could take positions in Class X exam as well. The school was upgraded to a higher secondary level in 1987. The school received certificate of honour in recognition of its achievement to be among the best higher secondary schools in Manipur in 1996-97.

Present Status of the School

Around 500 students are studying in the school which has Class IX to X. Facilities like library, computer education, science laboratory are available in the school. Admission of Class XI students is under process now. With number of students seeking admission in Government schools is increasing in recent years, Education Minister ordered the school authority to increase the intake of students.

If the intake of students is increased, the school will face shortage of teachers this year, says the Principal. She also wants that the Government sends some teachers to the school.

This 66 years old school has so far produced many Doctors, Engineers, IAS, MCS officers, MLAs and Ministers. Many position holders in the Matric and Class XII exams have also been produced by the school.

“Unluckily, we can’t produce any position holders in recent years. However we are putting in possible efforts to bring out more meritorious students in the years to come”, said Principal Sumati.