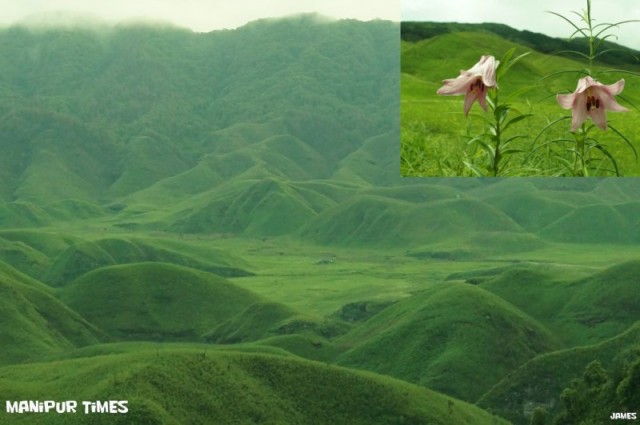 We had meal in the night that was great. I still recall Lucksana and his friend Malem who help us carry our luggage to the central cave. Well we have come to our resting point. That was a great sensation. Another fact was that the team who left a day earlier have arrived just an hour or two back with some of their company still to make the summit. The route from Manipur site via Mao is typical and they have to cross Mt. Tenepu the highest peak of Manipur or Mount Iso.  The terrain on that path is different the rock cliff is not spacious it was a foot step gap rock path where one distinguish his aliveness or the big fall in the rock.

Well adventurous and careful the other team of 11 have made it to the summit. They narrated that the base camp at Mao was very majestic with fencing and the route they have trek are very majestic with waterfall and rock cliff everywhere.

We spend the night at Dzuko. The meal we had was rich protein and carbohydrate from the dal and rice we carried along the trek. The night was beautiful there and we had a good sleep. The morning was amazing it was a mist wake up and the tent was wet with dew drops. We slept till the Sun spread out. Green looks and white dew all over the ground. Wet as one walk through the pants got watery in a 200 meter walk.

Out of tent the view was majestic. After a deep sleep and coming to senses one realises that he or she is in a right place. Something new, something different, something inquisitive, all but lots of suspense and uncanny of what the valley has in store for the visiting tourists like us the simplicity was still intact.

The walk to the river for freshening up and nature’s call was in fact a new sensation. Bottle in hand and a search for the natural yellow manure was a new sensation. I guess I am imitating my past when in childhood.

Well it was an unexpected pleasure when I found my team making breakfast in the early morning. Suresh was a former trainee of Manipur Mountaineering and Training Association. He was an early wake and the morning tea was very refreshing in a mist with porridge and biscuit. Well it was so aesthetic and a simple natural beauty endowed with silence and calmness.

One guess it is not happening but fulfilling in the sixth sense. One felt it in the nerves, the day was not ordinary. One sense that the valley has something in store. Well lunch was served.

Post lunch we had a calm rest and started off to explore the Valley. We go for the caves which is around 4 kilometres away from central cave. It was a rocky terrain and water streams run at the foothill. The landscape was different from the place where we stay the night. The sensation was strong.

Rock caves among soft soil and green vegetation. People often camp in the interior of the camp. The outlook was majestic. The site is not common. There were dwarf lilies along the path. A signboard directing Jaffu River was sighted. It was a good sensation to see the lilies blooming in group. It was even more amazing to walk pass the rocky caves and bath in the stream and rest on the rock surface.

Not even a single fish was sighted in the stream. But it was crystal clear water. The stream runs all along the valley.

Our team had a good time bathing and exploring the rocky cave and we felt a big discovery after a high mount and climbing down the rocky terrain to play at the watery floor of the stream flow at a boulder landscape. Well we walk pass the rocky cave following the stream and reach our camp for lunch. Our boots just keep on walking and we felt unless we walk there will be no discovery or exploration.

It was good to see other trekkers taking shelter in the cave or just walking at the other end. We felt like we are not alone in the vast landscape. Well lunch was ready different tem went to different direction and at around 1pm or 2pm everyone reported to the central cave for lunch with plates in their hand and munching away the hunger and energy boosting food.

Stallone who is a wild life photographer caught a viper snake which is poisonous along the mt iso route and with his skilful tactics took out the fangs and video shot for his collection. The same venture added a real life adventure as we witness the move of the snake and learn some of the reptiles’ behaviour.  Another snake which was non-poisonous was frisk out from near the central cave. The snake became more active when we put water on their skin.

Loya of WAHPS who is part of the management team for the trip expressed that the trek was to make the volunteers of WHAPS to visualise the real forest. How trees grow in Natural habitat and real hill trekking experience are other salient feature the management team wished to imbibe the participating juniors. Getting exposed to matured forest and bio diversity is good for the all of us he continued.

We instruct our team never to harm the natural flora and fauna of the valley. Not to kill even and insect or pluck a flower. We pick up some litter as a part of social service to the valley.

I really enjoyed the trip. I love photography and Dzuko is a heaven for landscape photography. Serene and so calm, we have to really listen, becoming quite in the mind.  Dzuko is very feminine to me and we have to search for what she has to offer says Loya.

We came to know the requirement and we learnt the gap. Financial management and days plan we learn. It is a learning process indeed. We have carried rice, dal and oil in excess. It was luggageful for us. We could do away in the next trip says another team member.

There was happiness in small things like collecting firewood, making a fire, fetching water, walking all the way to the river for washing utensil, bathing and freshening up. The daily routine and activity became so different from the normal days. There was no buzz on the phone or a notification on the facebook.  But some play music with the phone and there was a dance. We became so close to the nature. There was no requirement to browse the folders of the wallet to buy a thing. The nature was bounty and we keep thinking which way to go and explore.