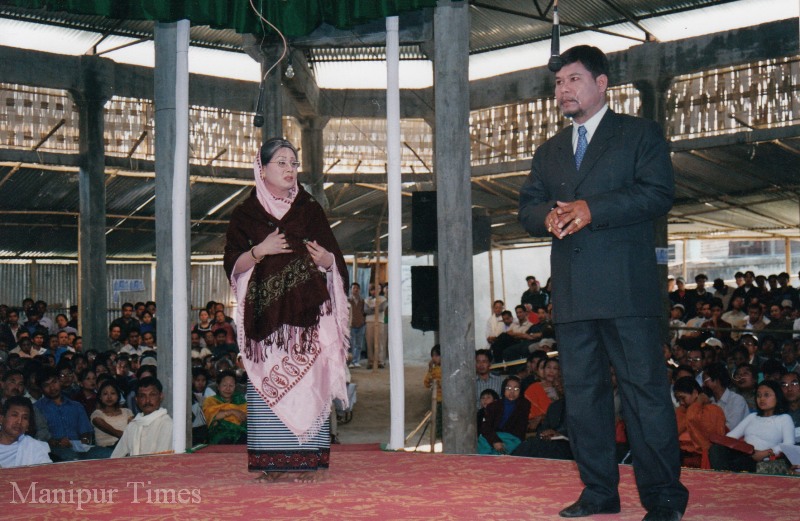 Keirao Rajen, the popular shumang leela artiste made mockery of his money minded elder brother with his humorous one-liner “Shi-aa dhapti” in the play, ‘Sabi Sanou Express’ of Naharol Khongthang Artiste’s Association. Since then, this particular phrase has become the favourite of many in Manipuri parlance. Such is the effect which Keirao Rajen can give to the people of Manipur from his shumang leela platform.

With his thunderous voice and catchy dialogues, Keirao Rajen does not need fresh an acclamation or introduction in the shumang leela (Manipuri courtyard traditional play) scene. He started his career as early as an artiste used to get Rs 5 per show.

It can be well said that Rajen was born as an artiste; nothing could distract him from becoming an actor. In contrary to his father’s dream of becoming his son a Government officer, he joined leela groups and started taking part in leela shows.

For this, his father often scolded him when he returned home. At one point of time, he had to manage hard with shumang leela shows and preparation for B.A examination.

His colleagues, particularly the director often got angry with him for his failure to take his role in leela shows. His mind was more occupied  by preparation for the examination with an aim to live up to his father’s expectations at that time.

He got through Graduation from Lilong Haoreibi College under Manipur University in Economics and Political Science.

Keirao Rajen started his shumang leela career in the year 1972-73. ‘Dewan Shaheb’ was his first play wherein he appeared on the stage in a supporting role. The play was written by Nandeibam Sanathokpa of Langdum and gave its stage performance at Wangkhem in 1973.

Then he took the role of the main protagonist in the play ‘Loukhatpa’ written by Y. Ibomcha. From that play, Rajen started earning Rs 5 per show.

There was no well organised shumang leela groups under any exact banner at that point of time. Some art lovers of any locality used to form a group, popularly known as ‘leela party’ and visited here and there for leela shows without caring much for money.

There were ‘leela parties’ known as Konjeng Leikai Party, Heingang Party, Keirao Party based on the name of leikai (locality). The shumang  leela shows during those days were almost free and promotional shows. The artistes aimed at promoting the art form leaving behind the sense of commercial interest.

Unlike current system, no formal written invitation was given to leela groups for shows. Traditionally, a kwa tangga (betel leaf and nut) was enough to invite a leela show.

In 1975, a leela group comprising 11 artistses used to get Rs. 60 per show at an average. When divided, an artiste got Rs.5 per show and the remaining Rs.5 was deposited as party fund.

At that time, artistes visited many far flung villages like Waikhong, Pangaltabi, Sugnu, Nongmaikhong, Laphupat Tera villages which are 60 to 70 km away from Imphal by bicycles in contrary to the present artistes who comfortably go in reserved vehicles for leela shows.

Rajen said, “We sometimes returned home riding bicycles from those far flung villages in the late midnight or early wee hours.  It’s emotional to have reminiscence of those past days.”

Remembering his early days, Rajen said, he used to count the number of shows his party had performed during Kang (Rathjatra festival). At that time, he got Rs 35 per show. He was so happy in seeing the amount which he got as the fruits of his performances.

Rajen has not only fulfilled his dream to become an acclaimed artiste but also made reality of his father’s wish by becoming an Assistant AO in the Department of Agriculture, Government of Manipur.

Although, Keirao Rajen was introduced to the people of Manipur by the play, ‘Dewan Saheb’, people started recognizing him after the play, ‘Morning Star’ of the then leela group, Time Star Artiste Union.

Keirao Rajen’s role as villain Hemjit in the play, ‘Ningamhoudraba’ is also still remembered by many. His wicked role as the son of a Chief Minister was well appreciated.

Audience highly acclaimed his dialogues in ‘Thaballei Leinam’. Many people waited for his appearance in the play. People invited his group only to see his role.

In the field of theatre too, he has fetched Best Actor Award three times in the All Manipur Civil Services Drama Festivals in the drama play ‘Ithai Punamsingh’ and ‘Moirang Thoibi’ and others. He is an approved drama artiste of All India Radio, Imphal and participated in seven radio plays. Besides this, he has taken various roles in many Manipuri Digital Films like ‘Sakhenba Bhut’, ‘Sakhangdaba’, Ketuki etc.

Recently, Keirao Rajen won Best Actor award in the All India Drama, Dance and Music Competition 2012 held at Orissa for his play ‘Gobhardon Dharon’ by Apunba Kanglei Arts and Culture Association. The present Titular King Of Manipur Leishemba Sanajaoba acclaimed and presented him a certificate of honour for his role as ‘Mangoljao’ in the Shumang Leela play, ‘Maibado, Maibido, Mapuroibado’.

HIS TAKE ON CURRENT TREND

Keirao Rajen said, “Nowadays, younger artistes are becoming too commercial and money minded. An artiste should not over concentrate on earning money. Money will automatically follow him if he has the true artistic qualities. Role of a true artiste is to entertain the public through imprinting positive, constructive ideas, message on the public mindset. Too much commercialisation of art will degrade the aesthetic values of art.

Regarding public claim on hike of show charge, Rajen said, on an average, leela groups are charging Rs 17,000 per show from which an artiste get Rs 400 to Rs 500 per show. There are many artistes who hail from far away localities. They usually spend Rs 200 to Rs 300 to reach leela group office in fare or petrol and pocket money daily.