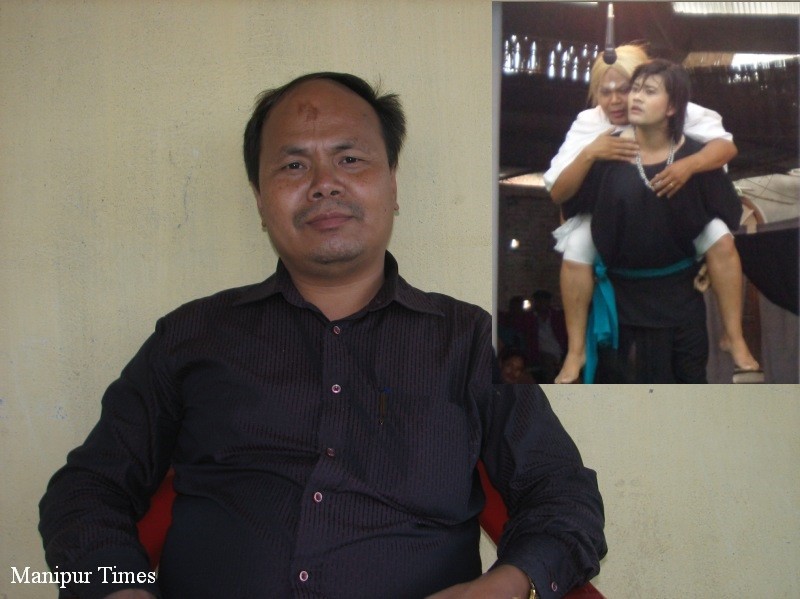 “Frequent bans imposed on Shumang Leela shows by different organisations, and bandhs, general strikes clamped by pressure groups directly affect the growth of Shumang Leela. It has become a fashion in the state to impose ban on entertainment activities, however, nobody cares the adverse impact given to the livelihood of artistes. The present income of the artistes is so low that they find it hard to maintain their family with the meagre income earned from Shumang Leela shows”.

Renowned Shumang Leela comedian Sougrakpam Hemanta recently talked to Manipur Timesexpressing his concern over the impact of frequent imposition of bans on artistes.

he is working hard to promote the status of Manipur Shumang Art form as well as the Artistes associated with it.

48-year-old Hemanta is son of Ibomcha of Irom Meijrao Mamang Leikai in Imphal West district. He started his Shumang Leela career on December 12, 1982. MitrangiSangsar of Shining Star Artiste Union was his debut play wherein he essayed the role of a comedian.

He got his first time Best Comedian Award in 1987 for his intriguing performance in the play, Sharat Ritugi Purnima of Kamakhya Sangeet Mandal.

Moreover, he has acted in many Manipuri digital films as well.

People still remember his role of an illiterate Minister, Mantri Dolansana in the play Adhikar of Kamakhya Sangeet Mandal. His role of a government aided school teacher OjaTolhal in the Shumang Leela play, Eegi Mahao was also fascinating that many people still address him with his stage name, Oja Tolhal. In fact, his stage name OjaTolhal is more popular than his real name Sougrakpam Hemanta among the people of Manipur.

“For comedians, it is, sometimes, necessary to use dialogues beyond the script of a writer to entertain and grab the attention of audience according to the situation. Trying to maintain a close relation between the audience and the artiste during a Shumang Leela show is a must for all artistes”, said Hemanta.

In the journey of his 30 years of Shumang Leela career, he has won Best Comedian Award 20 times and Best Director Award two times.

Hemanta studied in Irom Meijrao Mamang Leikai Lower Primary School. He passed matriculation from Irom Meijrao High School and graduated from Manipur College in 1987 in Arts stream. He is the third son among eight siblings of four sons and four daughters of Sougrakpam Ibomcha. He has now three daughters and two sons.

Shumang Leela should be considered as national theatre of Manipur and a media that disseminates message to the people on various social issues. This great traditional art form which implies the identity of Manipur needs to be preserved.

October to April is the best period during which Shumang Leela plays are frequently shown as almost all the festivals in Manipur take place during the season. Artistes can earn good money during this time. Unfortunately, all activities of Shumang Leela plays used to come to a standstill when any organisation announces ban on entertainment activities on the eve of examination of students or for any social issue. Artistes who maintain their family with this profession suffered severe impact during such situation. Organisers need to relax Shumang Leela professionals during bandh or general strike considering its importance as a traditional national theatre and a tool of media which aware the masses, he observed.

He said that the word Shumang Leela is the combination of Shumang (courtyard) and Lila (play). It is also known as Jatra or Jatrawali which is an import from Assam and Bengal as a result of contact with the mainstream Indian culture.

In olden days, Shumang Leela plays were performed in the centre of courtyard. As a result of this, this particular performing art form was given the name Shumang Lela by the people of Manipur.

Nupi Shabi (male artistes who take female role) is the unique identity of Manipuri Shumang Leelas. Make-up and their artistic skills are so fine that audience hardly believe that they are actually male artistes.

It is high time that Shumang Leela art form be institutionalised by the state government to save it from extinction.  New Shumang Leela artistes need to be trained by framing a syllabus to replace the old artistes, otherwise the art form will get perished if such measures are not taken up in time, Hemanta said.