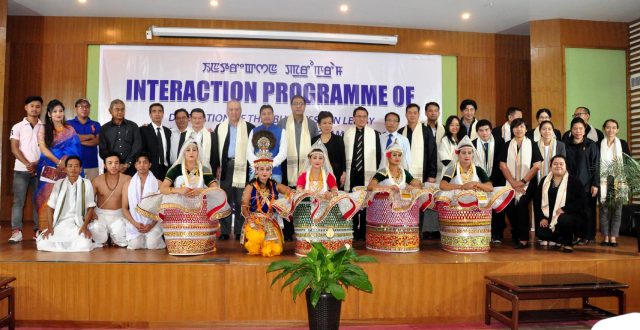 Imphal, 26th May, 2017 (DIPR): The State Government, today, hosted an Interaction programme of Delegation of Thai businessmen led by His Excellency Shri Jukr Boon-Long Ambassador of Thailand to Myanmar with Manipur Government officials and businessmen at Classic Grande, Chingmeirong.
The State Government was represented by Public Works/Rural Development and Panchayati Raj/ Commerce and Industries/Power/IPR/Administrative Reforms and Training Minister Shri Thongam Biswajit, Youth Affairs, Sports and IFC Minister Shri Karam Shyam, PHE Minister Shri Losii Dikho, Chief Secretary Oinam Nabakishore and other officials in the function.
Addressing the function, His Excellency Shri Jukr Boon-Long said the main purpose of the visit was to see the condition of the Trilateral Highway (passing Thailand, Myanmar and India) and the economic opportunities available across the border in India and Manipur.
He said that, earlier in the evening he had a meeting with the Manipur Commerce and Industries Minister Shri Th Biswajit and talked on several issues including trading, investment and tourism.
Chief Secretary Shri O Nabakishore said the visit of the Thai Delegation shows the interest of Thailand Government and the Thailand Business community in developing business relations with India, especially with Manipur.
He said the main thrust of the Act East Policy of the Indian Government is to have much better business relations between India and South East Asian Countries.
Elaborating on the major problems in improving trade relations, the Chief Secretary said several portions of the Trilateral Highway (passing Thailand, Myanmar and India) is very deplorable.
He also said that the draft of the India, Myanmar, Thailand Vehicle Agreement is already prepared and once it is signed by the three countries, it will allow seamless movement of people and cargos among the countries which will improve trade relations.
The Chief Secretary also said that efforts are on to introduced Visa On Arrival and e-Visa facilities at the Moreh Integrated Check Post.
He added that the rail line will reach Imphal by 2020 and that there are also plans to extend the rail line till Thailand.
Shri Nabakishore also appealed to the Thai business community to explore the business potential of the State.
The evening also witnessed a display of Manipuri cultural items for the visiting delegation. (DIPR)