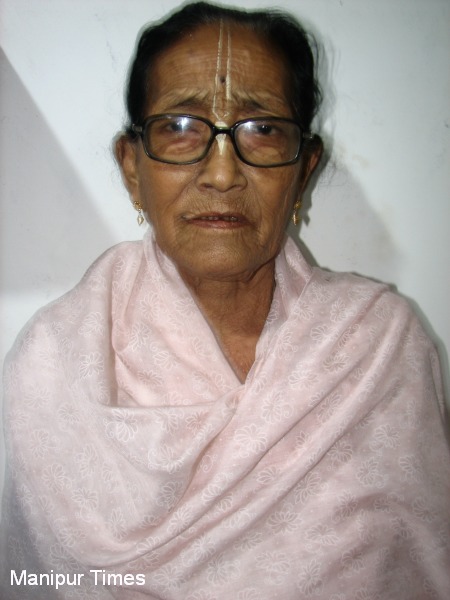 Very few people know that popular actor Bony’s mother Surjamukhi Devi is not only an acclaimed theatre artiste of her time but also taking active part in moulding new artistes of the current generation.

Surjamukhi was a favourite theatre artiste of 1970s. She won the best actress award in the All Manipur Drama Festival organised by Publicity Department for the role of Thambalnu in the play Yairipok Thambalnu.

In 1971 she got the award of best supporting actress for the role of Dirty Pana in the play Balidaan.

In 1974 she was awarded with the second best supporting actress award in the All Manipur Drama Festival organised by Manipur State Kala Akademi for her role in the play Lal Ngamba. She had also acted in various social, historical and folk plays.

Surjamukhi started her career as an artiste when she was a student of third standard. Her first ever performance was in Goura Lila in which she acted as Haridas. That was followed by the play Shakuntala in which she took the role of Bharat.

Surjamukhi joined Aryan Theatre when she studied class nine in Wangkhei Girls’ High School and acted in two plays Cheitanya Mahaprabhu and Macbeth and played the role of Tara and Lady Macbeth respectively.

She later joined Rupmahal Theatre and played the role of Pratima in B.A. Thiba, Tongou in Nupi Lal and Maipakpi in Bir Tikendrajit.

In 1955 Surjamukhi joined Manipur Dramatic Union and then became the regular artiste of the organisation. The prime of her career was the period when she was with M.D.U.

In 1970s, theatre became so popular in Manipur and everybody knew the artistes. As such, Surjamukhi was recognised by the people of her time.

However, like man is a mortal being, artistes do have their passing up phase. Gradually, Surjamukhi became fading away from the minds of theatre buffs thereby developing a distance between her and theatre platform.

Situation compelled her to embrace another profession to earn her livelihood. Surjamukhi not only became a vegetable vendor but also did all kinds of small time business in order to meet the financial needs of her family.

Surjamukhi says, “Artistes do not want to worry about their family problems. They enjoy remaining lost in the dream world of depicting their roles”.

However, Surjamukhi had to hold back her passion for long 20 years as the situation did not permit her to return to the theatre platform.

Visibly emotional Surjamukhi tells Manipur Times that the credit for the second episode of her career in theatre go to her son Bony. With the popularity of Bony touches its peak, everybody started remembering Surjamukhi, the stage queen of her time.

At the age of 72 she is imparting acting skills to young artistes of M.D.U. She wishes to continue to do this till her last breathe.

In 2009 she was honoured by Manipur Sahitya Parishad with the lifetime Achievement award, Natya Bhushan (Stage Leela). In 2011 she was awarded the first Dhanachandra award.