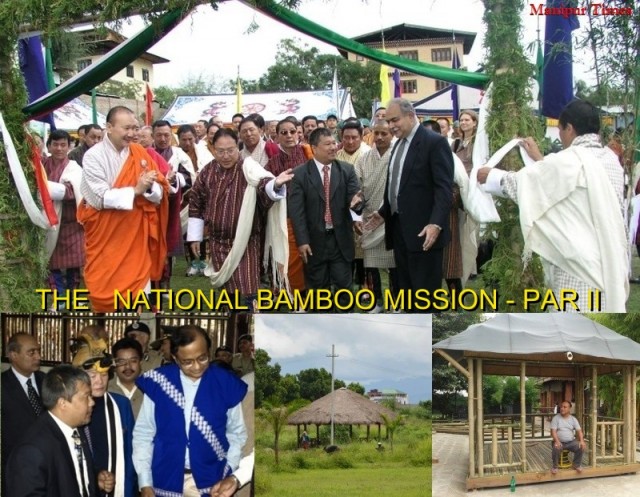 Need of focus on bamboo-based development

One of the core strengths which is still virgin and if exploited could bring wonders, especially to the up liftment of the socio-economic conditions of the rural poor is BAMBOO.

Bamboo, ‘the plant of fascination’, with its many remarkable properties, including strength, lightness and flexibility, as well as nutritional and environmental value, has more than 1500 documented applications, ranging from medicine to poison, and from toys to aircraft. It is without doubt one of the most important non-wood forestry products from one of the most important agricultural plants worldwide. It is a fast growing natural resource with unsurpassed rate of biomass generation. World- wide over 1200 different species grow with annual crop production of approximately 10 million tons, or about 8 million km of bamboo, enough to belt the earth 200 times. The main bamboo stands are found in China and India. Unlike timber, bamboo is self- regenerating natural resources with new shoots that appear annually ensure production after individual culms. In Asia, Africa and South America, it is a basic raw material with numerous traditional uses and is used as an ornamental material. It is used for ecological purposes such as soil stabilization, erosion prevention on hill slopes and verges; and, very importantly as forestry plant. As a material it has many applications, in local industries like handicrafts, furniture, utensils and houses, construction and as and paper industries.

There has been a growing awareness in recent years about bamboo being an important component of development and an effective means to improve the livelihoods of rural poor people. It is a natural vehicle for development because rural people generally have adequate access to it and it can be easily grown and harvested. In many parts of the tropical world the rural poor are completely dependent on bamboo for their shelter and for day-to-day utilities. Over 600 million people generate income from bamboo; over a billion people in the world live in bamboo houses. Women and children, most of who live at or below subsistence levels in the countries of Asia and Africa, harvest a great part of the bamboo that is used. The annual trade in bamboo and related products is estimated at US$ 15 billion. In the last decade, increased knowledge about bamboo has given rise to many new industries and products. Increased research on bamboo has had a tremendous economic impact.

In China, for instance, income from bamboo products has increased sevenfold in the 1990s due to an emphasis on R&D and efficient administration creating millions of jobs. Before 1970’s, the yield of bamboo per hectare per year was 2-3 tonnes. But, after 70’s, because of intervention of policy issues and other measures, the yield increased by more than ten times. A typical bamboo shoot grower in China, the total turn over per hectare per year as of now is around Rs. 7,00,000. One farmer who plants this particular species (Phyllostachys precox) in two to three hectares can afford to have a good house and an imported car over and above this providing employment to a number of labours. In that neighbor country, the total bamboo related business turnover per year is Rs. 18,000 crores of which 90% is contributed by the bamboo processing sector. There are more than 400 units in China making various bamboo based boards who not only caters to the domestic demand but also is one of the major exporters in the rest of the world. The total bamboo shoots production is more than 1 million tones of which around .18 million tones are exported to Japan alone. The total export value of bamboo products per annum is more than $ 550 million.

Bamboo- the choice of the millions

Many export markets have been opened and the development of innovative products is a continuous process. The utility of bamboo has expanded to include its transformation into various structural composite panels. Bamboo composites offer strategic advantages in promoting bamboo as a wood replacement and other construction materials and may be regarded as the Wood of the 21st Century. Bamboo promotes ecological security and contributes to rural development, environmental benefits and disaster avoidance, and improves socio-economic condition. In Europe, it is being used as an ornamental plant for over a period of 150 years. Currently over 300 different species of temperate bamboos are grown throughout Europe. Recently it has also been recognized as a potential agro forestry plant in Europe. There are significant developments within Europe in propagation techniques, biotechnology, and wood technology that are relevant for enhancing the value and utility of bamboo globally

Analogy with Dairy Industry in India

The bamboo industry in India is currently in similar stage of development as the milk industry was 30 years ago. The Indian dairy industry delivered economic growth using the principles of resource conversion through community means and building integrated partnerships between tiny and large enterprises. The dairy sector in India has shown remarkable development in the past decade and the country has become the largest producer of milk and value-added milk products in the world. The share of value-added products like ghee (clarified butter), butter, paneer (cottage cheese), yogurt and ice- cream is now placed at 54% as against 46% for fluid milk. This was made possible through the Operation Flood. Operation Flood, launched in 1970 has helped dairy farmers direct their own development, placing control of the resources by their own hands. The bedrock of Operation Flood has been village milk producers’ cooperatives, which procure milk and provide inputs and services, making modern management and technology available to members.

The dairy industry provides a growth model that can succeed in Indian conditions. The value-added bamboo industry is ideally placed to adopt that model. Given the right policy atmosphere and thrust, the value-added bamboo industry too, has the potential of reaching a size of Rs. 250 billion in the next 15 years, employing 11 million people in the primary, secondary and tertiary sectors.

The bamboo industry also fulfils the criteria suggested for sectors that need to be encouraged to achieve double-digit economic growth. Bamboo has a very strong relationship, possibly stronger than that of milk, with the rural communities, especially in the North east which would allow them to partake in a larger proportion of value addition compared with other industrialized processes.

The bamboo value-added industry thus provides an integrated solution that uses an abundant natural resource, which is environmentally protective and can be processed and generated through community-owned enterprises, both small and large.

To motivate Communities, NGOs, SHGs, Farmers and Entrepreneurs, and to provide an interactive coupling between technology, economy, environment and society for speedy development of Bamboo Processing Industries to build up a substantial base for production of value added processed bamboo products for domestic and export markets with a strong emphasis on cleaner and user friendly technology and quality enabling the production, supply and consumption chain, especially to realize direct benefits of new technology, environment friendly products and marketing network and to promote sustainable development, employment generation and poverty alleviation.

Bamboos are a unique group of giant arborescent grasses in which the woody culms arise from underground rhizomes. They are shrubs and have tree-like habit; their culms are erect and sometimes climbing. Bamboos are characterized by woody, mostly hollow culms with internodes and branches at the culms nodes. They are part of grass sub-family Bambusoidae, a tribe of the Gramineae and multiply mainly through vegetative propagation with gregarious flowering habit

The abundance of bamboo in many tropical countries, especially in Asia and its ability to grow readily and spontaneously has been the cause of neglect in developing this natural resource in the past. Its socio-economic importance for the rural population was realized as under:

Some of the unique characteristics of bamboo are as follows:

•                     It tolerates soil conditions ranging from organically poor to mineral rich and moisture levels of drought to submergence thus making it valuable for reclaiming degraded lands and drought proofing;

•                     Bamboo preserves many exposed areas, providing micro-climate for forest regeneration and watershed protection (the plant’s vast underground rhizome network may cover up to 100 sq. m. around one bamboo clump);

•                     It provides healthier environment by sequestration of carbon and lowers light intensity and offers protection against ultraviolet rays.  It provides the fastest growing canopy possible for degraded lands, developing micro-climate for other life and yielding more oxygen than equivalent stands of trees. A bamboo forest can even be part of natural environmental cleansing system that converts pollution into plant nutrients while producing valuable crops;

•                     Bamboo is light weight, is elastic and resistant to rupture and is ideal for using in house construction in areas prone to the natural calamities such as earthquakes and cyclones;

•                     With tensile strength contending that of steel and a weight-to-strength ratio greater than graphite, bamboo poles are lashed together for scaffolding since ancient times;

•                     The industrial potential of bamboo is a viable substitute for timber and for other uses is gaining importance. Bamboo furniture, building materials, handicrafts, new generation products (flooring, roofing, particle board etc.) have great potential for the future;

Ministry of Agriculture and Co operation, Government of India.