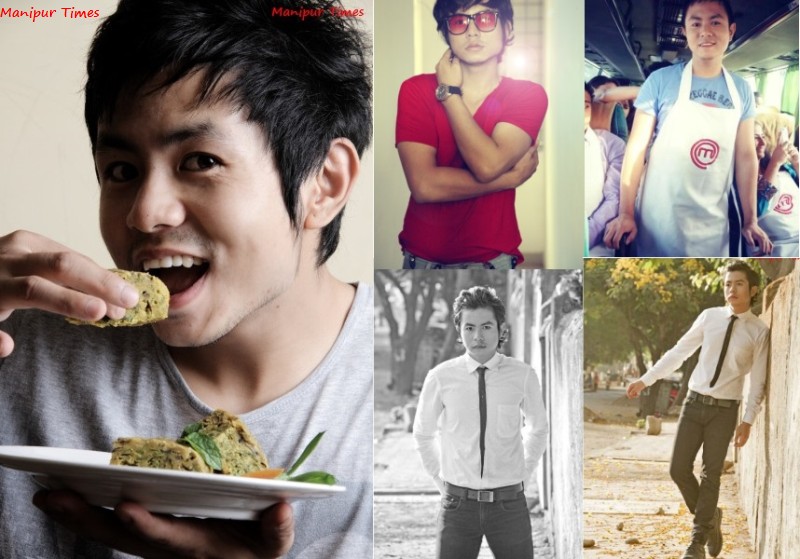 The taste and nutrients of a cuisine entirely depend on the expertise of the chef and the ingredients he picks up in his recipe. Most people do not ignore two points while having a new cuisine – taste and health. Now a days, the continental cuisines that we never heard of before are now available at street eating joints, near our homes.

Advancement in technology, adoption of good work culture, changing in food habit and mingling of people of different culture and background have brought us the opportunity to taste and feel the world at our doorstep. It is true that our world is becoming smaller day by day. There are many people who want to travel, and explore and enjoy local cuisines and culture of different places. And Bijou Thaangjam is one among them.

Bijou Thaangjam is a 25 years old self-taught Chef. He was born to Thaangjam Bijen and Thaangjam (O) Aruna of Khurai Thaangjam Leikai, Imphal. He can be pronounced as a young Master Chef as he was among 50 best chefs of India selected from 5 lakh registered competitors of the ‘Master Chef India Season 2’. He was brought up in a family of carpentry and handloom and handicraft. Since childhood he loves cooking, painting, drawing and his wish was hosting cookery TV shows. Bijou started cooking at a very early age and no matter the result of his cooking, his mother encouraged him.

He sometimes gives vocational training to SHG members at his home town on kouna products and outsource the designed products to Mumbai and abroad. Bijou is a very talented young Manipuri who is so versatile in his ideas in the field of art and food. His desire to be a part of TV industry came into reality after seeing a registration call on Facebook for the ‘Master Chef India 2’.

The challenge of Master Chef was sponsored by Amul and telecast on Star Plus. At present, Bijou is staying in Mumbai, and his friends always insist him to cook continental cuisines in parties. His passion is cooking variety of foods.

The journey of Master Chef India for Bijou, started from Pune. He had to travel on the very first day of his audition early in morning from Pune to Mumbai. He had to carry home-cooked food for his first audition that started at 9 in the morning.  He even did not get enough time to cook but his extraordinary skill in cooking came in handy and managed to cook Morocco-Chicken with green olive and baby carrots.

The first audition of the ‘Master Chef Season 2’ turned out to be a huge challenge for Bijou. Those nearly 5 lakhs registered people from all over the world turned up to join the Master Chef show. The Mumbai audition was based on food knowledge of the competitors. He got through the first round and proceeded to other levels one after another.

Photo Credit: Courtesy of Bijou Thaangjam and Finding the Voices

After clearing 3 rounds on the same very first day, he was asked by the Panel to tell his life story over a Video Dairy Session. The funniest thing in it was he was not fluent in Hindi even though he knew it. He had to make up his mind to speak alone on himself at the instant for 25 minutes.

The young man from NE India was in a platform to cook a dish from some given ingredients in 20 minutes before 12 juries. The survivor from 5 lakhs competitors was representing the whole Manipur and Northeast. He was quite nervous at what ingredient should he choose and what dish should he cook. He finally prepared a colourful cuisine of eggs, and he had a strong confidence in what he had cooked.

He got a couple of days to rest before the start of the next round, which made him among top 100 competitors. In the test, the competitors had to prepare a list of ingredients for five different recipes which were not found in any cook-book ever exist in the world.

Bijou recalled his far away home and the dish of ‘nganam’ in middle of the test. Inspired from the traditional dish of ‘nganam’, baked fish with herbs in banana leaf, he made it in different way with different ingredients to be a presentable in that platform. The ingredients list of his second cuisine was of ‘paknam’, not the traditional Manipuri ‘paknam’ but as a continental cuisine using different herbs. The third cuisine he made was ‘tharoi thongba’, a little different from our traditional cooking by adding extra masalas so that every Indian can taste it better. The fourth one was a unique egg salad inspired from a Russian salad. The fifth one was of Tapioca (U-Mangra) stuffed with beef. The unique traditional-based recipes were a wonder and splendid work to the juries.

His was interviewed by 15 judges. They asked him wonderful questions and at last they showed interest in his unique recipes. The judges asked him to cook ‘nganam’ as it was a new thing to them. Bijou baked it carefully and the taste of that special ‘nganam’ made him a competitor among 50 best Master Chefs of India.

Before the start of the elimination round of the top 50 contestants at the Boot Camp, a training session was carried out for them for only 15 days. It was an interesting moment that people from different inspiring backgrounds and talents were working together for a common cause, Bijou recounted.

Before he got into the world of professional chef, he used to cook food for himself, his family and friends in normal kitchens. But the cooking at Master Chef Competition was airing on TV for the viewers of the entire world.

The first Boot Camp was held in Hyderabad. The 50 fabulous contestants were greeted by top Chefs Ajay Chopra and Kunal Kapoor. Before the start of the first challenge, the third judge, Vikas Khanna, the No.1 Chef of America 2010, gave instructions about the challenge and welcomed with a ‘mystery box’ for the very first challenge for the contestants.

They were given 9 different ingredients out of which at least 3 should be taken and had to cook their best cuisine in 60 minutes. At the first elimination round, he made ‘chagem pomba’ a special cuisine of Manipuri recipe. On the second day of the Boot Camp, the contestants had to face do or die challenges of three basic chopping skills. They were given three different knives – a paring knife, a chef knife and a Chinese chopper.

Unfortunately, Bijou had a cut in his thumb accidentally by the Chinese chopper while cleaning his chop board after shredding cabbage. Luck did not favour him in the second test as well. Three identical Jellibis carrying the logo of Master Chef at the enter must be prepared in the second test.

The third test was testing round in which they had to identify blindfolded all the 18 ingredients of the unknown cuisine given to each of them in five minutes and had to write it down in two minutes. He could note down only 14 ingredients in the cuisine and was very sorry that he had to return back home.

Although he was eliminated from the competition, it was our pride that he had represented us in the competition and became one among the 50 Best Chefs of India. During his stay in the show, he always promoted Manipuri cuisines.

ENCOUNTER WITH A BOLLYWOOD BEAUTY

Bijou still wants to promote his skills on TV shows that in turn would earn fame for him as well. Another golden opportunity struck again recently. He got a phone call from one of his friends telling him to make up a good story on real life for a TV channel. He put forward his story to the channel and his story was approved and granted him to take part in the show. Thus he got the chance to meet Bollywood star Asin in the Super Santa Reality TV show.

The show was the funniest and best show of his life. He said, “Asin was more beautiful in real than reel and he was quite a bit nervous. The reality show had to undergo many re-shots due to his unnatural looks”.

Bijou has no particular job in his hand. He always wants a job involving creativity. He has done many odd jobs in the past 3-4 years – from salesman to baby sitter. But his hidden potential has revealed ultimately to all of us. Bijou said, he wants to become a public figure or a celebrity who can share his creativity knowledge to the world. Currently he is happily settled in Mumbai and took up acting as his main profession.

He has modeled for some print ads like KFC, Karbonn Mobile, etc and also acted in few short films. He recently acted in a corporate film for British Council. He also enjoys being a judge for fashion shows, talent shows and food festivals. There are few feature films in his kitty, both Bollywood and International films. Soon we will see him.