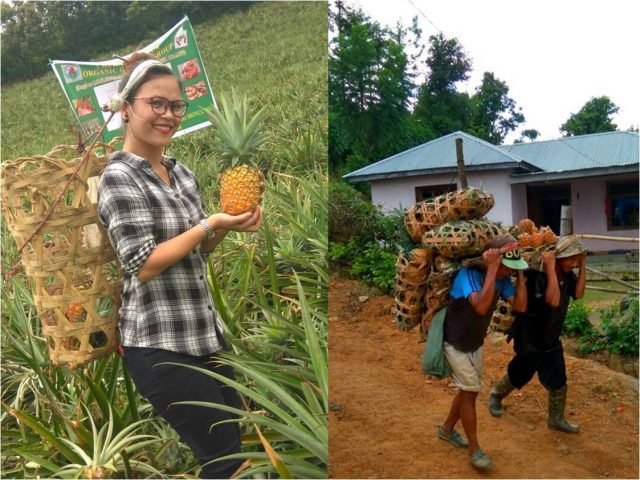 Circa 1947. It was the month of February / March just a little away before India won her freedom when Pu Songpu Gangte planted 40 pineapple suckers at Khousabung in Churachandpur District of Manipur. The 40 pineapple suckers that have been planted 70 years ago have forever changed the history and desitny of Khousabung DCC area, revolutionizing pineapple cultivation as a livelihood alternative in Manipur.

It is said that Agriculture, or for that matter, Horticulture has been one of the oldest profession, as old as human civilization. So does the cultivation of pineapple has been in practise much before the birth of India’s Independence, signifying that India’s Independence was born with the spirit of “dignity of labour” of its citizens.

Pineapple, a tropical fruit famous for its “thorny crown” has been first cultivated in Brazil. Pineapple was first called “anana”, a word derived from the Tupi-Guarani word “nanas” in South America, which literally means “excellent” fruit. Despite the fact that ananas had long been grown and eaten in South America, the explorer Christopher Columbus was still credited for the discovery of the fruit in 1493. He found it on the Island of Guadeloupe, which is now a French overseas territory in the Southern Caribbean.

Pineapple cultivation was introduced to India by Portuguese in 1548 AD.

When Pu Songpu Gangte planted 40 pineapple suckers at Khousabung in 1947, it was soon followed by others as a profession, and the process of pineapple cultivation gradually spread to new areas, one after the other. Among those early cultivators were Pu Khamzathang Gangte, the late Chief of Bunglawn, Pu (L) Kamsoi Gangte, Pu (L) Nielgo Gangte, and others. They took to pineapple cultivation in a massive scale and the pineapple cultivation has spread it wings by becoming as an alternative livelihood profession. May their souls rest in peace!

My father once told me that pineapple suckers were collected from Lakhipur in Assam. He said that he himself have collected pineapple suckers from Lakhipur and transported it by flight. They were the first one who planted the Giant Kew variety of Pineapple in Manipur, even though the Queen variety were found in Thoubal area of the state. What is unique in their approach was that, the “first blood” cultivators have chosen pineapple cultivation as a livelihood alternative, which stands the test of time, for the last 70 years.

Locally known as “Lengthei” in Gangte dialect, which means “the King of all Fruits”, pineapple has been cultivated in almost all the 16 districts of Manipur. This is clear from the fact that “Pineapple Festivals” are being celebrated in some part of the state or other, from time to time, apart from the “State Level” celebration. According to a survey conducted by the Manipur Pineapple Festival Committee, Manipur in August 2008, Churachandpur District is the largest producer of pineapple in the state, thanks to the large scale productions of pineapple within the jurisdiction of Khousabung District Council Constituency. There are about 400 pineapple farmers in Khousabung DCC alone with an area of over 1000 acres of land being under cultivation. As one takes to Khousabung DCC Headquarters, a lively sprawling pineapple farms, with all scenic beauty of the hills would mesmerize the visitors. A cynosure of all eyes, indeed!

The Giant Kew variety of pineapple, with all nutritious contents, has been known by many as one of the best pineapple in the world.

Seventy years down the line, yet all is not well and there are mounting problems being faced by the farmers’ community. To begin with, transportation is always a headache for the farmers as there are hardly good and motorable roads within the pheriphery of the sprawling pineapple farms. In the absence of modern transportation, the farmers have to transport the harvested pineapple by traditional means, carrying the pineapple basket (palbawm) on their back. Secondly, marketing is another problem being faced by the farmers. With no semblamce of large scale fruit processing industry hindsight in the sate, pineapple have to be sold in open market only for human comsumption, which limits the selling capacity and the price of pineapple are being compromised, much to the agony of the farmers.

The Queen variety of pineapple, which are harvested in the month of June is predominantly found in Thoubal and Imphal East.

Even as Khousabung DCC area is the largest producer of pineapple in Manipur, the area has been unfortunately one of the most “neglected” area in terms of development and governance for nearly half a century. Although Khousabung has given the state a pride of place in the field of pineapple cultivation, on the other hand, the government is yet to deliver its due to the people. Decades of apathy and lackadaisical approach of the succesive governments all these years have resulted in Khousabung DCC as the most “backward” area in the whole of Manipur.

Notwitstanding the fact that the people of Khousabung area worked and toiled through thick and thin, braving the mercurial sun and rains. A true reflection of their grit and determination in upholding the spirit of “dignity of labour”, they have chosen the profession for the last 70 years, giving an “alternative” livelihood mission, pioneering a profession since India’s Independence.

Even as Khousabung area is the largest producer of pineapple in the state, giving Manipur a rightful place in the field of pineapple cultivation in India, howsoever, Khousabung is one of the most “backward” and “neglected” area till today by succesive Government, one after the other. It’s high time that the Government compensate “more than 50 years of apathy and negligence” by delivering “justice” to the people whom they have been “swear” to serve them.

Basically, there are three “Es” which can transform and take Khousabung – the Capital of Pineapple – and its surrounding areas to a giant new leap forward as under:

1. Administrative Empowerment: Khousabung and its surrounding areas may be able to see the light of development and taste the fruit of India’s freedom by “Empowering” them with necessary administrative macheneries. This can be achieved by creating Khousabung as a “special” zone and establishing Government’s administrative wing such as Additional Deputy Commissioner (ADC) or atleast creation of Khousabung Sub – Division for speedy progress and holistic development. In such scenario, the Government representative, say the ADC or SDO can best deliver the Government’s agenda at the grassroots level, resulting in transforming the “backward” area to a “model” colony or region of Mother Manipur.

2. Infrastructural Empowerment: Khousabung area is still lacking in basic infrastructural amenities, though they have been the largest producer of pineapple in Manipur. Towards this end, the role of Government is imperative, with setting up of “Fruit Processing Centre” to yield added value of pineapple, leading to economic boom for the farmers and pushing up the state’s GDP higher-up, besides generating hundreds of employment avenues in toto.

Seventieth year of Pineapple cultivation and a decade of grassroots movement, in the form and style of Manipur Pineapple Festival, howsoever, it is sad but true that there has been lacked of zeal and enthusiam from the Government to promote horticulture crops and the farming community per se. In the midst of changing political dynamism, there is however a silver lining of hopes for the future. It is, therefore, interesting to note that the success of India’s Act East Policy, particularly in the case of Manipur will solely rest with the success of horticulture crops and availability of indigenous products for outside exports. The clarion call is cystal clear: Act Now or Never. An administrative mechanism that links the Government and the people is the need of the hour.

(The writer is a journalist and Founding Honorary Secretary of Manipur Pineapple Festival Committee, Manipur. A Master’s in Political Science and a recipient of “Jewel of India” Award, he has been honoured with the degree of “Doctor of Humanity” (Honoris Causa). He can be reached at gingangte+a+gmail+dot+com. Facebook @ Gin Gangte / Twitter @ GinGangte)