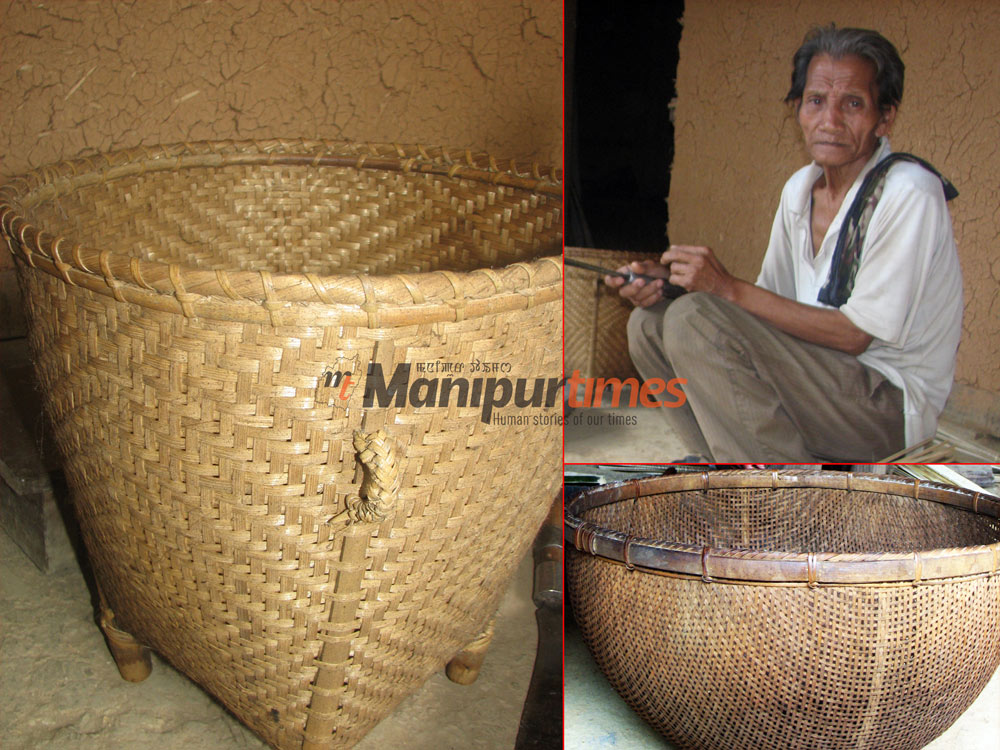 For 80-year-old Mothil Moba Maring, son of Khamba hailing from Sandang Senba Maring Village in Senapati district of Manipur, making different bamboo craft items such as Thumok (basket), Polang (hamper), Phiruk, Ngarubak (fish container), Lukmai, Sham and many other has been the main source of earning for his family since past many years. He sells Lukmai at Rs300 per piece, Thumok at Rs200 to Rs500, Polang at Rs10 to Rs40 according to the size. With the income earned from this business, Mothil Moba has been maintaining his large family having three daughters, four sons and his wife.

Talking about the marketing part, Mothil said, “I sell all my bamboo craft items to local woman traders.” These woman traders come to his house and collect the items from him to sell it at the markets of Imphal, Kongba Keithel and others. Bamboo crafts have been the sole source of earning for Mothil. Thumok, Polang, Phiruk are commonly known as Luktang, Bunga and Phingaruk in Maring dialect respectively. At least, Rs300 to Rs500 can be earned by this Maring bamboo craftsman every day.

He said that for making various bamboo craft items, varieties of bamboo such as Uyee (Dendrocalamussericeous), Liwa, Longa, Utang, Warubop, Watangkhoi etc are used. The bamboos which are used in making craft items are mainly collected from dense forests which involves trekking through unfriendly terrain.

After the bamboos are collected from the forest, these are cut into fine pieces (locally known as Paya). Thumok, Polang, Phiruk, Long etc are made by interweaving the Payas each other and it takes two or three days to complete a Phiruk. However, he can complete making Thumok in a day.
The finished products are then distributed through local woman traders for sale at Imphal market and Kongba Bazar etc.
Bamboo craft products such as Phiruk, Thumok and Polang made by Mothil Moba are the indispensable items for Meitei community. Phiruks are traditionally essential items in the marriage ceremonies of Meiteis. It is mainly used for carrying bananas, coconuts, other fruits and vegetable items. Polangs (Hamper) are used for storing vegetables and rice etc.

Making of Thumok, Polang, Phiruk and other bamboo craft items has been a traditional profession of Maring community settling in Manipur. The people of this community are expert in this particular craft.  The old Manipuri proverb, “Maringna Shaba Shangbai Namma Hangba Hounabra”, itself indicates Maring community’s association with bamboo craftsmanship.

Maring craftsman Mothil learnt the art of making bamboo craft items from his father at the very tender age of 12. He is an illiterate. He was not sent to any school as his poor parents could not afford to the expenses of his studies and there was no school in his village when he was a child. At that time, the village children had to walk upto Imphal for schooling. Schooling in the village was only for those children of rich parents who could attend school staying at Imphal. For him, his poor and illiterate parents could not afford to anything for his education. The life of young Mothil was confined in the works of Pamlou (shifting cultivation in hills) instead of attending school.

“I used to walk on foot up to Kongba Keithel and Imphal Keithel for selling bamboo craft items made at my house. There was no good road connectivity and passenger bus service at my village. There was no motorable road except a footpath stretch which connected the village with Imphal. Now, with black topping of the village road, there is good road connectivity in this village.Now our village is developed to a certain extent as compared with the past. After selling the bamboo craft items, I used to return from Imphal on foot in dark night crossing the jungles on the way”, Mothil recalled.

Sharing some of the tit-bits about his expertise in the field of  bamboo crafts, he told Manipur Times that he uses the bamboo varieties such as Uyee (Dendrocalamussericeous),Unap, Warubop etc for making Thumok, Polang, Sangbai (a bamboo basket used as a measuring unit for rice), Long (Basketlike fishing tool), Sham and Phiruk etc. A bamboo craftsman who intends to make Thumok (basket), Polang, Phiruk, Lukmai and other items cuts up the whole bamboo poles into many pieces. The cut bamboo pieces are then divided vertically into two. The divided halves are again split vertically into two which is locally known as wachets. Then the gluey layer known as Kabuk which ison the inner surface is removed. The hard outer layer of the split bamboo is removed by scrapping with a Thangjou (Machete) while it is still wet. The protruding parts on the nodes are also removed. The wachet is split vertically into several pieces to form payas. The payas are directly and closely interwoven each other to make baskets and other items.