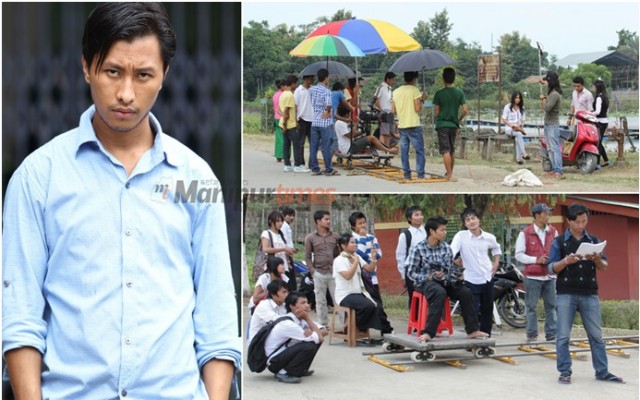 Song after songs runs from the pen of a Lyricist, for films or music video albums. But, what really a Lyricist might be doing and thinking, minutes before he writes or at the point of writing his song?

For a lyricist, a note-pad is a canvas for painting his romantic thoughts and emotions, where he puts his strokes in papers with aesthetical words that promise to bestow a lasting sensational impression to audience. This is what the emerging young lyricist, Ajit Ningthouja, usually experience to create his masterpiece.

“The task of writing a song is quite demanding and more often, not easy to be done anytime or any moments of a day. As, it has its own moment, a mood, to write off… and it’s very hard to penned with a deadline or within a fixed timeline for finishing”, said Ajit Ningthouja, during an exclusive meet-up with Manipur Times, at his rented residence located at Konung Mamang Purielomba Leikai, New Checkon.

At a young age, he has penned more that 50 Manipuri songs including the hit film song ‘Watta Padabi Leirangni’ of Manipur Express, that have reached a viewer ship of more than 64,000 in YouTube within a short span.

The young lyricist has geared himself fully with Scripts, Lighting fixtures, HD CCDs Camera and lenses to occupy the seat of film director, and currently spending most of his time in and around the shooting-sites with his crew.

This 28-years-old upcoming director, songwriter is of the view that lyrics and its music are a potent means for a better expression of inexpressible feelings of love, and intangible emotions of beauty that could tug at heart.

Ajit Ningthouja real name is Nithoujam Ajit, the eldest of three siblings, where his father works in a government department and his mother is an Agalwadi worker. Ajit spent his early years schooling in his own birthplace Narenseina Maning Leikai of Moirang, of Bishnupur district of Manipur.

And after completing his high school exams, he came to Imphal to pursue his higher secondary    education. After securing his admission at City Montessori school, he began staying at a rented room in Keisampat, where his interest to write songs grew.

From his early age, Ajit began writing songs though it was sung by none. He has also approached many singers of that time to contribute his lyrics but their responses and attitudes disappointed him. But Ajit didn’t lose his heart but he continued writing with an expectation that someone might sing his songs someday.

Besides Ajit’s interest in writings, he also has an interest in film-making, and later he joined a film-editing course in Imphal. It was during this time he got an opportunity to introduce himself to film makers.

His first meeting happened with one of the popular film maker from the state, Oken Amakcham, where he provided him a chance to enter the film industry.

It was then after meeting him, Ajit’s lyrics were made known to audience by helping him reach the audience. His first song ‘Lonna-Chikna..” was directed by Oken Amakcha, and sung by two popular singer Rabir Thouna and Pusparari  for the film ‘Tellunga Mamei’. It was the first film for Ajit, under Oken Amakcham’s direction, where he contributed few of his lyrics, and beside this, he was also provided a chance to assist him in the film’s direction.

Later, Ajit began to work at ‘Dasu Film’ as an assistant for film-editors. Aside from films-editing jobs and assisting Oken Amakcham,Ajit have also worked with popular film personalities from the state and few of them are Boby Wakengbam, RK Lalmani, Irom Meipak (cinematographer) and O Gautam. He have worked with O Gautam (Director) for more the four-films, the recent one being ‘Manipur Express’ where he worked as a Video-editor; an assistant-director and also a Lyricist for three songs.

Current he owns a home-base-digital studio for films-editing called ‘Melei Digital World’ at his rented residence, located at New Checko,  where he carry out film-editing with few of his assistants. Besides editing, he also works as director for films and music video albums and a Lyricist too.

Now Ajit Ningthouja is in full-swing to climb the stairway to fame and fortune in cinematic world. he said, he charges around Rs 2000 for a single song lyrics.

Though during his struggling days, Ajit spent years working behind the screen with many film makers, popular film personalities, as a learner; as editing staff; as an assistant for directors with a minimal honorarium.

He finds difficulties in balancing life between career and family at times. Both his parent and two-brother lives in his birth place, Moirang, and he lives at New Checkon rented house with his better-half and child.

As an eldest son, he frequently visits his parents and his father has not been keeping well off late. During his initial periods of his career, his family also faced financial problem, though both of his parent are salaried, and most shares of their earning and saving goes to his father treatments.

He plans to create a mark in film making career in future too, as Director, Editor and Lyrics.

Ajit spends most of his time in editing, shooting sites, and writing songs. Currently working for two films, one is ‘Shathiba Danger’ as a director starring Kaiku, Bala and Abeynao and is expected to release end of this November. And  another film is titled as ‘Warning’  as a Director, Editor and Lyricist produced under the banner of Kangla Film’s Premjit Noarembam, the said film will Danny, Sonia, AB, Susmita and Kokfhai in the cast.