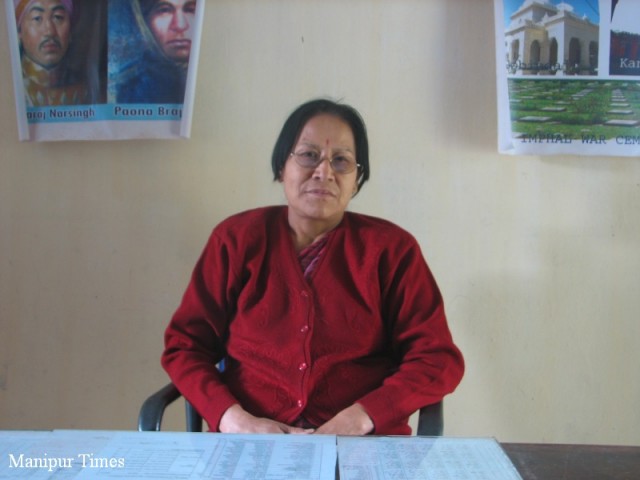 “As we are in the initial stage, we are unable to bring out position holders in HSLC examination. But we are hoping to. In the HSLC examination to be held next year, about 40 students of Wangkhei Model School will appear in the examination. It is expected that some students of our school will pass with high marks. We are making great effort to achieve this” says Y. Mirabai Devi, Headmistress of Wangkhei Government Model High School while sharing her views regarding the school in an exclusive interview with Manipur Times.

With the objective of restoring public faith in government schools and producing excellent students, Wangkhei  Model High school, Imphal East  was opened up  as a Government model school among the nine model schools spread across different districts  of  the State on April 8, 2011 by the then Education Minister L. Jayantakumar Singh.

About 233 students are enrolled in this school for the current session and 26 teaching staffs is running the school under the school management and development committee. The school has class VI to class X standard classes. Dedicated teachers are making great effort to bring out talented students from the school like others.

As a strategy to improve the talents of the students in view of the ensuing HSLC examination, the school authority arranges extra class or coaching for two months especially for the students of class X just after completion of their annual examination. To evaluate the merit of the students under continuous comprehensive evaluation (CCE) scheme, periodic Tests are conducted for four times a year and Terminal examinations are held.

The main objectives behind the opening of Government  model schools is to restore public confidence in government-run schools and also to bring out excellent students who could compete with their counterparts in other parts of the world.

The performance of the Manipur Government schools in Classes X and XII examinations has been poor every year with almost all the top positions being occupied by candidates from the private schools. As a result of this, public confidence towards Government schools has been lost and parents are sending their children to private schools in view of their children’s future career.

With a mission to revive Government schools which are fading out day by day, Manipur Government adopted the policy of setting up Model schools in Manipur during 2010.

Wangkhei Model High School which was opened up as a government model school in 2011 is fully functional with its mission to restore the long lost public confidence and save the prestige of the Manipur government schools just as Keishamthong Model High school did in producing position holders of HSLC examinations in recent years. Before its inception as a model school, the name of the school was Wangkhei Girls High school especially run for the girls. Now the school has been a co-educational one.

Expressing concern over the shortage of basic infrastructures being faced by the school, she said Government had provided the school with 40 laptops since its inception as a model school. Irregular power supply has failed the functioning of the computers. Students are taught only the theory and its application. No practical computer class is done because of power failure.

“The necessary Infrastructures meant for a model school are not available in the school so far. The boys and girls toilet is lying defunct and separate toilet for teachers is not constructed yet. This creates a big problem. Lack of proper drainage has logged up water inside the school campus causing flood during rainy season. Since the kitchen and dining room for providing mid-day meal to the students are flooded with water, school authority finds it difficult to provide mid-day meal at present. Government’s attention is the need of the hour to solve the problems being faced by the school” the Principal appealed.