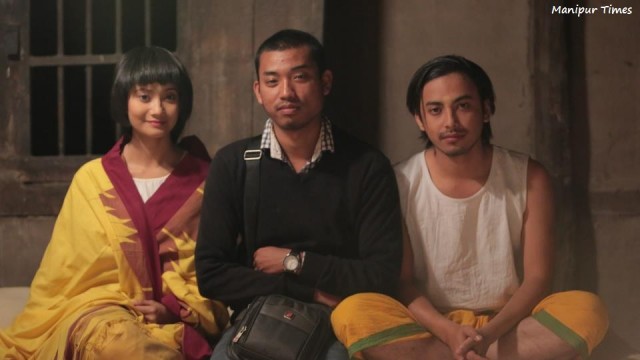 Hemanta Khuman is one among Manipuri music video makers whose talent has created ripples in the recent time. He was born to late Thingujam Yaima and Thingujam Ongbi Mikhubee of Singjamei Waikhom Leikai among six siblings. He studied at International School of Resources (ISOR), Thongju-II, Imphal upto XII Standard. He passed Council Exam in 2010 and presently he is pursuing Bachelor’s degree in Economics from Manipur College, Pishumthong Road, Imphal.

Although, he is a music and film enthusiast, he does not take academic career lightly. He wishes to do MA after the completion of BA. Nevertheless a young student, his hard work and talent have made him popular in the world of Manipuri digital film and music video as a young director.

Hemanta loves tradition, culture and climate of Manipur. Among the festivals of Manipur, he likes Yaoshang and Kang-chingba at most. His principle on these festivals is the gathering of young and old, exchanging love and care to each other.

Like many other Manipuris, Hemanta loves thabal chongba which normally organizes at various localities during Yaoshang (Holi) festival.

“I like thabal chongba not because it gives me a chance to dance with girls but it is the best time to enjoy with friends”, Hemanta said.

Hemanta got a turning point in his life when he got the opportunity to assist choreographer Satyajit Thiyam in 2010. Later, he met Oinam Gautam, renown Manipuri film director, and worked under his guidance as an assistant. The first assignment he took with Gautam was a teleplay, which later subsequently switched over to films.

Hemanta Khuman worked as an assistant director in ‘Phijigee Mani’, which bagged Best Regional Film award in Manipuri language at the 59th National Film Awards. He got the opportunity to work closely with director O Gautam and learned new aspects, techniques and ideas in the field of direction.

The eagerness to explore the knowledge of film making guided Hemanta to direct music videos. His first production was ‘Thamoida’, featuring Soma and Arjentina. Hemanta’s creative presentation and singer Arya’s unique voice made the video a success. Hemanta’s talent was well acknowledged by the Manipuri film fraternity after the release of the music video. After ‘Thamoida’, there was no looking back, Hemanta kept on rolling the reels.

Hemanta also assisted Gautam in another digital film, ‘Manipur Express’. To broaden his experience in film making, he plans with long vision to work with the renown director and still he is working as an assistant director in the upcoming Manipuri digital film, ‘Beragee Bomb’.

Apart from films, another popular music video is ‘Kaina Peerang’. The video is a passionate love story with a tragic end. The short music video precisely depicts the faith of innocent people when omnipresent miscreants roam everywhere looking for chances. This music video encompasses the traditional art with modern look to inculcate our rich heritage in today’s sophisticated but broken society. The project of ‘Kaina Peerang’ also became a success.

Regarding the project, he said, “I was bowled over by the lyrics of the song the moment I read it. I instantly made up my mind to do the video soon after I read the lyrics after Galif Pa, the producer, showed me.”

The story was about an innocent person victimized by some outlaws, which often happens in today’s Manipuri society. Thus he planned to do an experiment on the theme telling the people of Manipur about a tragic life faced by innocent people and its consequences.

In this music video ‘Kaina Peerang’, the costume was designed by Galif Pa. The video featured Dekey and Soma. The shooting locations were Singda Dam and Uyumpok which were finalized after an in-depth discussion according to the theme of the song. Hemanta searched for long about a home and a place to suit best to his project before shooting the video. The home depicted in the music video is a lonely and silent home where there is no security to women when their husband is away from home. The silent valley Uyumpok, is a village in Ukhrul Road where most of his shootings were covered. The project took three days in shooting and a week in post production. The production was a very short duration of experiment which gives us endless entertainment with worthy message in musical tunes. This music video is a fiction but inspired from real life about crimes, injustice and suicide. Many untold sad stories are endlessly echoing in our ears due to social unrest, Hemanta regretted.

Regarding the financial supports and incentives, he felt very sorry that most of the music videos are self promotional. There is no market for such productions and they never gain monetary assets after releasing their projects for masses. The artistes are very cooperative that they always wish to promote themselves so as to get a chance to step into the world of Manipuri digital films. Recently, another musical video, ‘Tapthakho’ was released in which the casts were Suraj and Soma. This musical video was produced under the banner of Golden Arts Production, the producer is A Kennedy Singh and the lyricist is Khaidem Imo.

The story is based on ‘Kombirei’, a beautiful flower in violet that nobody tags. Soma represents the flower in the music video, showing her calm and boundless beauty which fortuned to a tragic life after her husband, Suraj marched for war. The costume of the video was also designed by Galif Pa and the rhythmic music was composed by Surmani (Rishi). The singers of this musical video are Bitan and Pratima. The music video was hit by large number of individuals and he even hoped that he will be honoured for Best Music Video Award. The choice of public did not meet the final destination, re recounted.

In most of Hemanta’s work, the traditional images are projected and makes a link with new and modern looks in choreographs, costumes, locations and castings. He brought the steps of Thang-Ta in both ‘Kaina Peerang’ and ‘Tapthakho’. The art was shown not to promote our beautiful tradition only but to adjust with the theme of his productions. Thang-Ta represents the role of destruction and defence, and in these videos it create the idea of struggle and survival against all circumstances.

Hemanta sometimes finds many constraints in the completion of his projects. Bandh, blockade, getting permission for location, schedule call off from artistes etc often happen. The greatest headache in his projects is reshooting.

At present, Hemanta is directing a music video of popular singer Sori Senjam’s song. The song ‘Mensinba Ngamdraba’ is written by Romi Meetei and the video will feature Tamphasana and Roshan.

Hemanta has a great interest in tradition and culture of Manipur and he always tries to express the worries of women and innocent people in our State. He looks forward to produce music videos on women empowerment. He hopes for a society with strong will which can stand against all odds.

No labour, however humble, is dishonouring