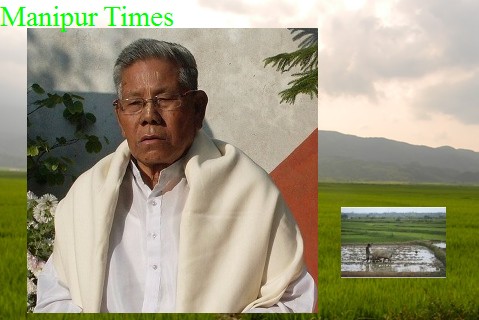 He would walk around three miles every day from Oinam to Nambol for going to school after doing day-long farming. For this, he would wash off his muddy feet using hay and ash so that he could attend the school on time. Due to financial constraints, at the young age of ten years old he was forced to stop schooling for two years that left him totally heartbroken. During this unlucky phase, he would smoke cigarettes to cope the mental stigma inflicted to him. But his firm belief in education helps him in rising from the ashes and completed his school despite of all the odds. Even he was reeling under many untold miseries; he would not care all the odds and gave up materialistic commodities but made sure that all his four children are well educated and excel in their own stand despite of the financial impediments and would treat his sons and daughters equally and motivate them. And, the rest is just history.

This is the touching story of 80 years old Ingudam Tomba Singh, retired Vice-Principal from Lilong Haoreibi College and Oriental College, Imphal hailing from Kwakeithel Thiyam Leikai in Imphal West district. With his firm belief in education and importance of it, he has able to overcome many hurdles that lie ahead of his goal knowing that one day his hard work and impeccable efforts would be surely paid.

Born in a poor family, he started shouldering responsibilities from a very young age. Since there was not proper source of income in his family, he was compelled to become a bread earner so that his other family members do not stay hungry. There were many instances where he had to skip meals as there was nothing left to have. But his unrelenting efforts and hard work never let him down and struck in negativity.

His childhood days were confined in Oinam Village in Bishnupur district. It is here where his early part of life got resurrected and consolidated. Even during his school life, he indulged in farming knowing that it would only provide bread and butter to him and his family. There was in his mind that such hard time would let him live a better life in future. And, so it does.

He was destined to farming at a very young age of ten years old using cows and buffaloes to sustain livelihood and also schooling. Showing his love for education, he used hay and ash to wash off the dirty from his body and used to run to attend the school on time. In his locality, he was known for walking so quickly that people can’t see his feet touching the ground. Even he was under intense pressure and difficulties, he would not complain of anything.

At some point of time, he had to stop from going to school for a period of two years as he could not afford fees and expenses and that left him in dissolution. It was during this particular time that he started smoking as a mean to cope the situation at that very young age of ten years old. Later realising that this was not the way instead, he was again in the right track, moving forward toward his goal.

In those days, there was no electricity in his house and studying was mostly done during daylight and using light from burning wood called uchan and from kerosene lamp called podon.

Amidst the much hiccups and hurdles, he completed his schooling and went to DM College for further studies and became teacher at Johnstone Higher Secondary School. His first salary was Rs 100 salary per month and in those times it was considered a huge amount and had lots of value. At this stage also, he does not stop helping other family members.

Then, he completed his Master degree from Gauhati University and started teaching at Digboi College in Assam for some time. Later he came back to Manipur and continued in teaching profession as a Lecturer in Zoology and became Vice Principal at Oriental college, Imphal and later retired from Lilong Houreibi College.

He got married to Ingudam(O) Saroj Nalini in 1971 and the couple have been blessed with two sons and two daughters.

Following his footsteps, all the four children (2 sons and 2 daughters) are excelling in their own chosen trade. And why not, he has set a perfect example for his children to follow the right path of life.