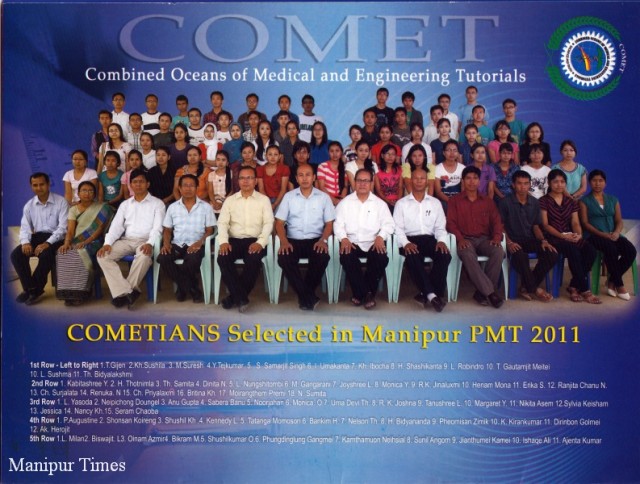 With maintaining 80 percent success rate and planning to set up a branch in Shillong, COMET does not need an introduction in the field of providing coaching to medical and engineering aspirants in Manipur.

Earlier the founders used to give home tuition to medical and engineering entrants before COMET came into being.

Samarjit is specialized in Zoology, Umakanta in Botany, Tejkumar in Chemistry and Shashikanta in Physics. Although, they put in wholehearted effort in assisting their students to crack medical and engineering entrance examinations, they felt the need for a coaching centre which provides combined tutorial of different subjects.

Soon after they realized the point, they decided to set up COMET appointing themselves as board members. Presently the board members hold the post of the Managing Director on rotational basis for six months.

Started with just two classes, COMET did not take long in producing first position holders in the State PMT. COMET students adjudged first position in the first, second and third batches that speaks volumes about the dedication of the teachers of the institute.

The current Managing Director Sanjenbam Samarjit Singh said, “We devote the whole day in this coaching centre and our newly established COMET School.”

In the engineering entrance tests as well, the institute has not only produced toppers at the State level, seven students have also got through IIT entrance so far. At present, there are about 400 students in the coaching centre.

The Managing Director said that the students of Manipur are very brilliant. They can achieve at the national level as well if they are given proper guidance.

Coaching gives the students new inputs and information within short span of time. So they consume less time while preparing for the state and national level entrance examinations, he added.

General strike and blockades in the State sometimes disturb the students, Samarjit said.

The coaching centre has two shifts i.e. morning and evening. Each shift gives four hours of coaching to students. The institute also conducts test every week.

Regarding exam preparations and study materials, Physics teacher Heikrujam Shashikanta said, “Research and Development team of the institute selects suitable teachers for each subject. We also develop the materials in our own way”.

Shashikanta said, “We have started printing study materials and distributing to the students. In the next couple of years even the non COMETIANs can avail the study material in subsidized rate from the institute.”

“We are developing the materials to publish at the national level as well. This material will help the candidates in the preparation for national level entrances”, he said.

Chemistry teacher Yensembam Tejkumar said that the teachers of COMET prepare study materials through their experience. The teachers also share and update the new information collected from other publications as well, he added.

He said that most of the students give emphasis on medical entrance in Manipur. Generally candidates start their preparation very late. But it is better if a student starts his/her preparation after he/she passes the HSLC exam.

“But in other States preparation starts from the 8th or 9th standard. The earlier you set the goal, the earlier you achieve your target. So, one should start as early as possible if he or she is willing to do it”, Tejkumar added.

With regard to fee structure, Tejkumar said, “We are teaching the students at a subsidized cost. The institute is very beneficial for those who are not economically sound.”

Since the institute is giving better service at low cost it also faced financial problem in the initial stage, he said.

Fee structure of the institute is divided into two policies known as long term and short term, based on the duration of the course.

Botany teacher Irom Umakanta said, that the institute has a policy of fee exemption for differently able persons. Fee exemption is fixed basing on the percentage of disability. The fee is fully exempted for some disabled students and 50 percent exemption for some other students.

“We are aiming to give service in the whole North-Eastern States.

“An institute can be a successful institute if the teachers teach the students with dedication. An institute needs to give good service; it needs to know the trend of the other States; how to counter it and how to produce best students”, he added.

Inspired by its success in tutorials, a higher secondary school for class XI and XII Science was set up at Changangei in Imphal West district in 2009. The school was established with a view to train the students a little earlier. The school is recognized by Govt of Manipur and affiliated to COHSEM.

Last year, a fresher candidate of COMET School stood second position in the State Engineering Entrance. He was also selected in IIT as well. And we are very much happy to that expressed the board members of Comet.

Not only that the school also secured 2nd position and 19th position and 100 percent pass percentage record in COHSEM Exam last year.

The tutorial centre has a management team who work for the welfare of the students. Very often the team bridges the gap between guardians and the teaching staff. Study material and other maintenance like distribution of questionnaire, test samples, study material and any query from any students are taken up by them. In this Takhellambam Gijen the administrator has served the longest starting from the beginning.

In fact all the teaching staffs are keen readers who grasp the latest development. They are often found reading books at home and at the tutorial centre. It is because of their earnest efforts that they have come up with the study material for all the concern subjects.

Mention may be made that in earlier time’s students from the State use to travel to other States like Delhi to get their coaching done. Some use to procure study materials from coaching centers outside the State at a very high price. To this it is also a cherishing moment for the State to have Coaching centre for the medical and engineering entrance exam that is performing and has many students in the professional line already passed out from the institute.