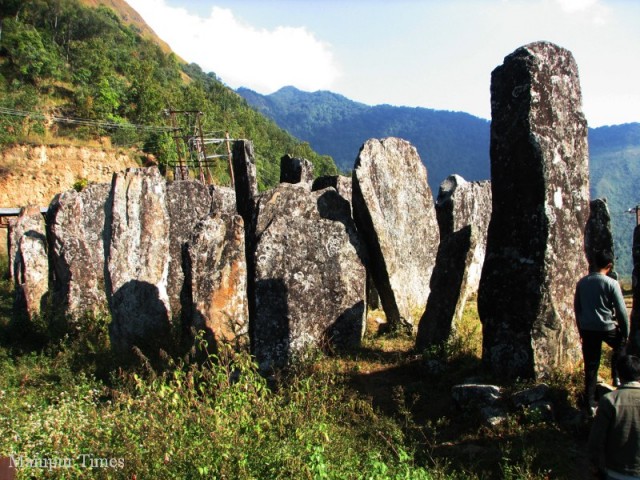 “I heard the stone calling to each other in the midnight“says Th. Keishing Village Chairman of Willong.

In the ancient time it is believe that the Maram Tribes erect stone to show their wealth and might.  One stone named after one man. He has to offer the whole villagers a non-vegetarian meal.

The custom of burying a piece of Iron at the base of the Monolith speaks of putting off the life spirit of the stones, as it is believed that every stone erection during a person’s life time is considered to be alive. In this regard the people of Willong speaks of the calling of Names among Monoliths at midnight such as Kanga, Hinga, Hiila, etc for the same reason only a few dare to go to this site during night time.

To own a stone they split local wine at the foot of the erected stone and sleep with longings for owning a stone in the Katak stone site of Willong. If it appears that the stone belongs to himin his dream the dreamer owns the stone. Such is the ritual of owning a symbolic stone in Willong.

The Katak stone site inWillongstands tall to the natural site of a very greenish tree and red soil. The village is resided byMaram tribes and is 40 kilometre drive from the Maram main road (National Highway 39).

In the old practice while erecting a ceremonial big stone they also keep a small stone adjacent to the big one as a tradition of accompanies.

The stone symbolises strength and sportsmanship. As a good practice people use to put up weed on top of the erecting stone and try to take it down with their toes. Rock climbing competition in a run mount after a short pace and stone jumps from one roof of a 10 feet tall stone to another at a gap of 3 to 4 feet is another adventure they enjoy.

People of Willong still believe that the stone protects them. Perhaps drawn from the idea that the stony hills protect them from storms and natural disasters. They also have a fear psychosis that if they do not appease the stone the boulders might run after them

One who can run around the erected stone in a complete circle wins a white hen and is regarded physically fit among the villagers.

A pair of stone erected in the name of two lovers who married and has children but die early due to incomplete rituals on erecting stone as is believed by the people is a common story often told to the visitors. The stone Maranghui (male) and Maraisuma (female) who were lovers of that time have not split wine while erecting stone in their name so they died an immature death believed the people of Willongsays R Karaibaa 70 year old village authority.

“At one instance they the British try to grab the stone but a pig runs around and do not allow the grabbing of stone” says the village authority. The statement seems to carry a strong idea of the resistance movement during the old times.

Another interesting story revolving around the Katak Stones is that a brother and sister fall in love and they indulge in physical relation. People came to know about the incident and the brother tries to hide his sister by making her stay at the top of the tallest stone. A tiger came to attack him and healso climb up the stone and they both stay together at the rock cliff. It indicates that the society do not allow immoral acts from time immemorial says a youth representative.

Most importantly during the olden times it is believed that the stone is also used to determine the prime time of marriage for a man.  When a man‘s hip or genital organ reach a mark depression of a dedicated stone in the Katak Site he is eligible to get married. And the height of such mark depression is around 4 feet in height indicating that the ancestors of Willong were once well built and tall.

The centuries old historically associated stone of Katak lies naked to the Sun and is protected with barb wire fencing by the villagers. The public regarded it as a heritage site. The elders of the village told us that many people have paid visit to the Site so far for its uniqueness and historical importance to the people living around.