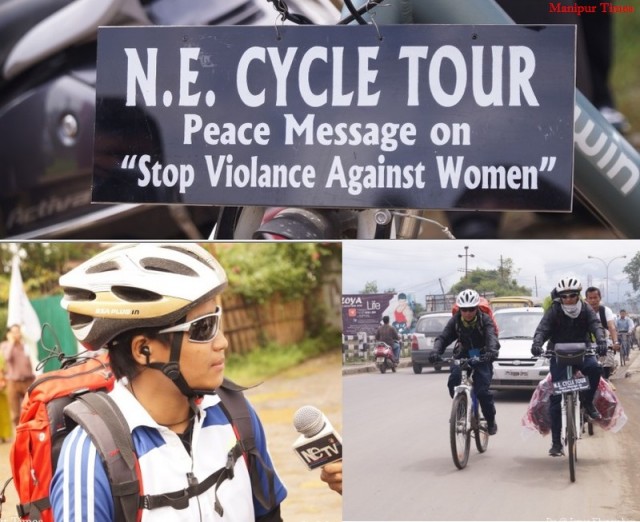 “I am a simple girl trying to spread the message of peace. I want to appeal not to look down upon girls. The male counterpart should look after their lady counterpart. For a good society we need good mother. Women play an important role in the society and we need to groom girl child” expressed 18 year old Bidyaluxmi as she was preparing to set out for her 110 days cycle tour throughout North East.

Carrying message of peace on Stop Violence against Women, Bidyaluxmi will ride along in the sun and rain for a cause and supports from all the states along her tour site is expected. Mirabai the only Women Minister of Manipur flagged off the daring rally from Sana Konung early morning today.

Just as she was flagged off for the daring tour light rain showered and she stop by to put on her raincoat and accompanied by a member of Manipur Cycle club  who would cycle with her till Mao gate Bidyaluxmmi paddled through the traffic as the clock tick 10 am. 21 year old Tanoujit Khangenbam from Keishamthong is her accompanist till the last part of Manipur. Tanoujit is morally supporting her cause and they knew each other as they were practicing for one month for the tour.

Bidyaluxmi who held from Lakhipur Sorok Atingba, Jiribam is the fourth child among four sisters and one brother. Her father Sougaijam Inaoton is the Chief functionary of Child Welfare Ashram Jiribam. Mention may also be made that the organisation is sponsoring her tour which is estimated to be around Rupees 3 lakhs.

She is an active member of Nehru Yuva Kendra and is in her B.A 1st Year. She loves socialwork and is also a volunteer in Child Welfare Association.

Her hybrid bicycle from a French company ‘Btwin assembled at Taiwan is a good mountain and street bike. In her front kit she keeps her mobile phone and wallet. A back pack with clothes for changing during the long tour and an attached luggage of sleeping bag, medicine, first aid, raincoat, tent, food and tools for repairing her bike in the long tour is kept intact.

Her cycle expert says that the cycle is a trekking and road bike. Good for long distance with 28 inch tyre and thickness of 1.5 inch. A front suspension to make her light at rough road and alloy built which make the whole bike much lighter for a smooth ride. At the back, packages are kept to balance weight. The cycle is expected to help reduce unnecessary exhaustion at the distance ride.

Sougaijam Inaoton.Chief Functionary of Child Welfare Ashram Jiribam informed that they have interacted with civil society organisation and department officials for night stay and supports. Women organisation, Youth Coordinators of NYK, Lions Club, Journalists Union and youth clubs all around the States are kept informed and they are supporting the cause.

Leaflets in different regional and native languages are printed for spreading intensified awareness along the route the bicycle rally is going to take place.

Minister A.K. Mirabai donated a sum of Rupees 20 thousand as a support for Bidyaluxmi cause. She also spoke on the need for such campaign in bringing peace and equality.