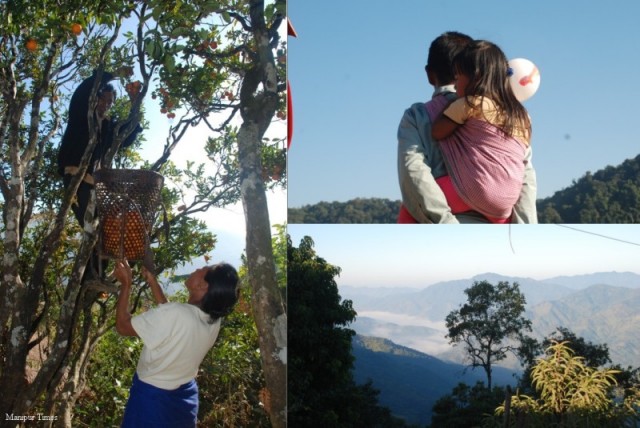 Manipur is a beautiful place to live in. Geographically there are more hill terrains than plain. However population index show more people living in plain area. But there are at least one third of the population living in the hills. For generations they have survived and lived in the hills from their ancestors’ time. Agriculture, horticulture, animal husbandry, poultry are good source of income. The forest has given them many things counting from hunting wild animals for food to woods for building shelter. They have also kept the rich culture, tradition and folk tales intact. The colourful dresses and the hospitable nature of the hill people have done wonder to visitors. To make life more efficient and systematic and to do away the hard labour in leading daily life certain intervention is needed.

Good practices found practicing in some hill areas which could be replicated in other hilly parts of the State could be helpful. We can highlight them for everyone to learn and for the stakeholders to implement them.

Unlike in the plain the commutation is difficult in the hills. And fetching of spring water remains the daily routine for many people living in the hill. But there are places where proper tapping of spring water and systematic distribution through pipelines is practice like in Haochong, a village at Tamenglong District. Abundant water will bring more hygiene in day to day life of the people.

MNREGA is making similar initiatives at certain places. Water reservoir facility with proper distribution will enhance a better lifestyle to people living in the hill areas of Manipur. I would like to find more on certain things like rain water harvesting and storage which would serve efficient.

Nowadays people living in the hilly terrain have a tendency of shifting to the plain areas for better prospect in terms of business or in search for better facilities. Number of migrating individuals from the hill area has increased over the last one decade. Like many people from Ukhrul are settled at Nagaram Imphal East and various part of the State.

Enterprisinginitiatives like passion fruit juice factory in Mao, Banana plantation in Machi hills and parts of Tamenglong, Orange plantation in Tamenglong became distinctly bright. There is every possibility of setting up certain things in the hills too. And it needs to be highlighted in the media for people to know and for them to get expressed if they have any skilful art to groom for better prosperity.

In fact connectivity is a real concern here. Inter village Roads connecting one village to another is given priority in this five year tenure of Central government where Union Rural Development and Panchayati Raj Minister Jai Ram Ramesh even visited the hilly roads of Manipur for a just development. The sanction this time has almost tripled from the last budget. But people need to be informed on the development works in progress and if not halted.

Systematic transportation is the next biggest things to stop more migration as it will keep them connected. The need for inter village transportation is equally important to bring the people to the main road and reach out for places they want to commute for the service of their choice including medical facility of their choice. Besides one hospital a district is underway with Senapati hospital being open to public so far.

There are wood mills and houses in the hills are mostly built from wood especially in Ukhrul. Kamjong is one area where people make fine houses with wooden floor and woods pull out from Myanmar like the red wood. An investment of Rs 25000 for a wooden house makes a fine home and most of the people make their own house or the carpenters are within the same locality. Bamboo houses could be one alternative for building houses as it takes lesser time for a bamboo to mature than trees. Bamboo ply and bamboo board and aids from Bamboo mission could bring more effectiveness. Well there are brick houses too but built very costly as the terrain need special care. Well tree is an easy reach and we need to divert the choice before it gets too late.

Encouraging education through good institutes enhances human resource and the adaptability is increased manifold. So I intended to highlight more on good practices in the field of education which is one factor of migration in today’s world. Ukhrul has many good schools and students are intact in their home town. Parents are happy to have their children learn in their locality. Manipur has high literacy rate and every parents wants their children to be educated properly. Don Bosco College Maram won the President award for excellence recently and youths of Senapati and neighbouring districts are happy studying in the bright college.

On the other side Illegal Poppy cultivation in the hills of Manipur has become a menace. The subsequent effect on climate in Manipur is hazardous. Poppy are grown in Ukhrul, Senapati, Chandel, Churachanpur, Tamenglong by unwanted miscreants. The quick money cash crop has become a fashion and thousands of matured trees are chopped down and replaced by the dwarf cash crop.

Some reasons are to make up the loss in the ethnic clashes between Kuki and Naga where many people fled their hometown and their houses and properties turned to ashes. To start up a new life in a new area and to make lost they are easily lured into illegal poppy cultivation. NCB and NABS officials along with the army have been destroying the plantation. But proper rehabilitation and planting of trees to replenish the lost have never been sighted. A rightful intervention will be a good cause to save the environment.

Sustainable electricity through solar power and mini hydroelectric project could be best possible means as is an undergoing initiative from Union Renewable Energy Ministry. Bio gas plants could replace kitchen furnace using firewood which is the utmost need of the hour. I think most of the woods were burnt for fuel. Biomass unit for converting hay and other organic waste into cakes for fuel is one good option too. The fallen leaves and barks the grasses could be converted into bio fuel.