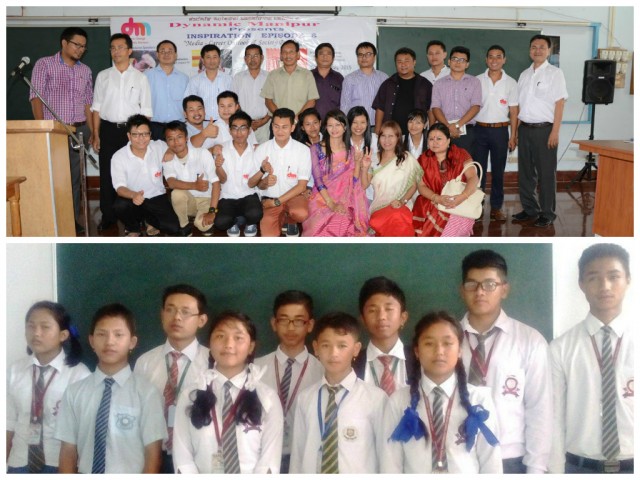 While delivering his speech as resource person on the topic ‘Role of Media in Nation Building and Career Avenues in Media’ during the Inspiration Episode-8 (IE-8) organized under the tutelage of Dynamic Manipur on the theme ‘Media – Career outlook and Society building‘ held at MIMS, Manipur University today, AIR News Editor Dr A Ibomcha Sharma said that media persons, being the professionals of an important pillar of democracy, are now needed as journalists, public relations executives, spin doctors, information managers, content creators and also in academic avenues in different capacities.

“The demand will be on the rise and it has to, in line with the changing paradigm of telecommunication, trade, tourism and other transformations in many fields of social life. However, the demand at the global job market of media is par excellent product and grooming such professionals is not an easy thing”, he said.
Since Media plays the role of a watchdog in society who always manages to highlight the errors of Politicians, Judiciary and executives through constructive criticism, Media itself is supposed to render its service to the society sincerely to avoid trust deficit. Otherwise the sanctity of the media professionals would be maligned.

While quoting former Indian president Dr APJ Abdul Kalam’s line “When you salute your profession, you need not salute anybody; when you pollute your profession, you need to salute everybody”, he said that every professional, may be doctors, engineers, journalists or IAS officers, need to serve the people with sincerity and dedication to win public respect. When they pollute their professions with personal profit oriented motive, they will not get public respect.

Impact TV Chief Editor Yumnam Rupachandra spoke on how a responsible media can help bring about major change in society and how you can become a responsible journalist.

He said that media influences people to help the people to bring about a better society. It plays a vital role in strengthening democracy, keeping the people well informed. Being a journalist is one of the noble professions as journalists serve people from top to bottom. When there is no elected opposition in a government, media effectively takes the role of opposition to criticize and brakes the wrong policies of the government.

Khelen Thokchom, Special Correspondent of Telegraph, national daily said that mainstream Indian media is losing its objectivity due to extensive commercialization of the news business. Editors have little role in deciding editorial contents in contradictory to what the editors are supposed to do with young CEOs dictating terms on what the readers want. It is because of this that instead of carrying a picture or story of a poor and pathetic farmer on the verge of suicide, editors are opting for pictures of celebrities like Aishwarya Rai or hospitalization of another well known actor.
Concerned about the increasing trend of ‘paid news’ in the state, the senior journalist said that such trend will lead to trust deficit on the part of the journalists and malign the profession. When journalists are under the hands of a few powerful, how can they bring about a dynamic change in society by revealing the malpractices of the people in power. People generally believe what the journalists expressed through their pen. When the mouth of the journalists is shut up with money, they cannot highlight the news what the people need most.