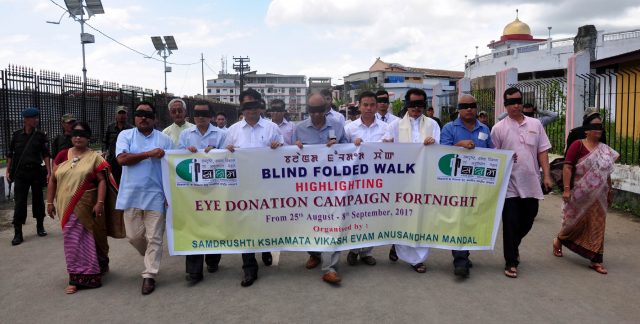 Speaking as Chief Guest of the function, Y. Khemchand Singh, Speaker, said that he could feel the difficulties that the visually impaired persons face after he was made to walk blindfolded for a short duration as a part of the campaign. He added that, just the thought that the visually impaired persons are never going to experience the beautiful colours is heartbreaking and for this reason, he and the other members have volunteered to donate their eyes for a good cause. He also said that each individual, after their death, should donate their eye as a gift to the society to enable the visually impaired persons to see the nature’s beauty that God has bestowed us. Eye donation awareness is necessary in various places of Manipur as many people lose their lives in road accidents and other incidents, he added.

Parliamentary Secretary Dr. Sapam Ranjan, speaking as Guest of Honour, said that the exact number of visually impaired person cannot be ascertained as there may be many cases which go unreported especially in the remote areas of the State. He also said that, since the medical technology has developed, visually impaired persons should not get dishearten as they can easily get eye transplant. A person saves the lives of two people when he donates his eye and that gaining vision by a visually impaired person is a moment to be cherished, he added. He further said people should take pledge to make the campaign a success.

Giving his speech as President of the function, L. Radhakishore Singh, Chairman, MPCB & KVIB, said medical science has developed and problems faced by human beings can be easily solved. Due to advancement in the medical science Polio, which was once a dreaded disease, has been eradicated from this country. Visually impaired person can also gain vision if people can donate their eyes without any fear as it is done after death only, he added. He further said that the government will consult with the doctors, authority concerned and work with sincerity and transparency and so people with various disabilities should not be dishearten merely because of their inability to participate in the society. He appealed to all the students to contribute boldly whatever they can as a citizen of the country.

As a part of the inaugural of the Eye Donation Campaign, Chief Guest of the function flagged off a Blindfold Walk joined by the special invitees. Altogether 60 persons volunteered to donate their eyes on the beginning of the Eye Donation Fortnight, as a part of the observance organized across the country. The function was attended by members of SAKSHAM, Manipur Prant, students of Ideal Blind School and Deaf and Mute School. (DIPR)