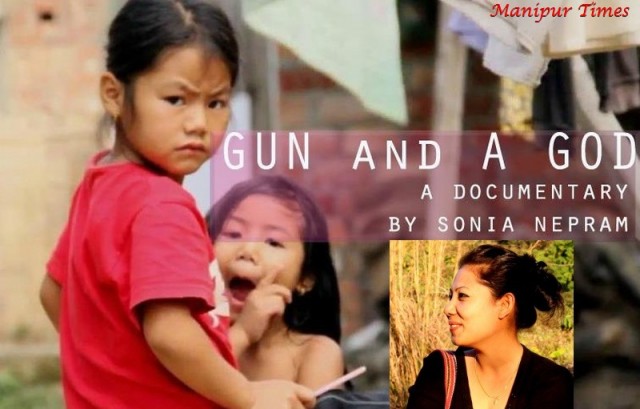 A Manipuri documentary film “Gun and a God”, by a young filmmaker Sonia Nepram, projects the issue of the status of women in Manipur. This film won the Jury’s Choice Award at the prestigious Mumbai Women’s International Film Festival (MWIFF) held in October this year.

Sonia Nepram was born and brought up at Thongju, Imphal East in a humble yet huge family. She is presently residing at Uripok. She studied at Little Flower School and Human Resource Development (HRD) Academy in Imphal. She completed her graduation and later, Masters in Mass Communication from Jamia Milia Islamia, New Delhi. Since then, she has been working on films, based on varying themes such as gender issues, survival of women in a patriarchal society and against domestic violence, the negative effects of law and order and so on.

Previously, Sonia had received special awards for her student film “Limited Edition” at St. Xavier’s College, Kolkata. The film also won a Silver award at Tata Institute of Social Sciences, Mumbai and bagged the second prize in the Students’ International Film Festival held in Indraprastha College, New Delhi. This film was screened in the Jeevika Asia Livelihood Film Festival, 2010. The young emerging filmmaker had also recently participated in the Film Appreciation Course in Pune, which was jointly organized by the Film and Television Institute of India and National Film Archive of India. She also dabbles in still photography.

The Gun, the God and the Film

Back home in a local daily, Sonia came across an article — about Purnima, a former insurgent from Manipur, born to a mentally unfit mother and an unknown father. This triggered the inception stage of her acclaimed film, “Gun and a God”.

It was very difficult for Sonia to convince her subject to be a part of this film. It took her almost a year, and she had to put in tremendous courage to go ahead with such a subject and do justice to it simultaneously. It was very difficult to find crew members for her production in Manipur. Then, she consulted her cousins, was introduced to Akee Sorokhaibam and together, they formed a small crew for the project.

The best moment during the production of the film was when Sonia went to meet Purnima’s mother, Kunjeshori, while the latter was under treatment. This film has not been just a documentary — but had gone beyond control — it had no script or dialogue. It seemed as if the project was documenting the real things, much more than making a film. Nobody could guess what would happen the next second.

The film shows the struggle of a solitary, forbidden and betrayed woman. Sonia contends that the women of Manipur have been glorified for their movements against all kinds of injustice. Yet, prejudices rule the roost. Her films can be an eye-opener for the womenfolk.

The film was released on YouTube to get more exposure. The appreciation and audience response have been beyond her expectation, she adds.

During the project, she encountered shortcomings during post production. The subject and the story were so strong and touching that she did not want to cut out any part of the interview footage. Another challenge was being a woman filmmaker in Manipur. For instance, she had to convince her mother when she had to work at night.

Sometimes they went beyond the scheduled time so as to cover the important clips and to grasp the facts. They even carried power generator to interview spots to overcome the power cuts. Her mother had figured out the budget of the film. She has no commercial motives or financial benefits from the film. What Sonia wanted was only the audience response.

The best part of the project was her involvement in all the stages from inception to promotion. She was involved in all the pre- and post-production activities, from framing the camera and light, to transportation. This 31-minute long, One Inch Production film took one year to complete and the post production was completed at the Heima! Films.

Sonia Nepram is currently working on her second film, based on Manipuri Fanek.

She admits she loves to work on women’s issues in Manipur. She welcomes all kinds of suggestions and feedbacks. She is as well closely associated with women’s organizations in Manipur. She aspires to create more awareness and bring about a change in attitude and behavior of people towards women.

In her words, “Our society is very rigid towards women. However, I have to fight against all odds”.

Original Podcast is available at FindingTheVoices.com by MONICA INGUDAM  (Episode-38)