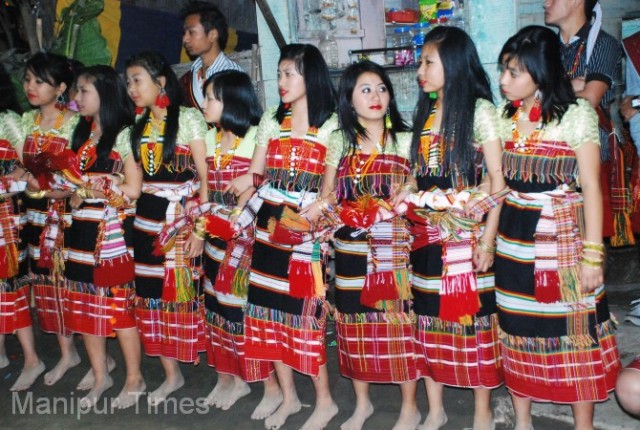 Gaan Ngai festival is a post-harvest festival where people enjoy and celebrate after a good harvest. There are other festivals associated with the agricultural practice and Gaan Ngai is the biggest festival among others. The festival is rejoicing of the community with prayer to Tingkao Ragwang the supreme God who created man. People pray for health and wealth. Cultural programmes like folk song, beating of drums, dances and rituals mark the festival. It is full of fun and colours. Children, parents, elders, youths come together in a single platform during the festival.

Some of the activates the people observe during the festival in a short description are:-

Day 1 – The first day of the festival is called Ngaigangmei. Rituals are performed at the Northern and Southern Village Deities by an old man offering eggs and piece of ginger. It is believe that the prayer helps do away untoward incidents like illness and death during the festival.

The old man after returning to male dormitory (pakhang phan) offers wine to lower realm God and Tingkao Ragwang the Supreme God who created man. The boys then beats drum marking the opening of Gaan Ngai.

A big pig is also sacrificed as an offering to Tingkao Rawang the same day. The spleen of the pig is observed for future omen. The spleen is then given to the oldest man of the village and the grand feast of Gaan Ngai starts at the male and female dormitories.

Day 2 – On the second day members of the male and female dormitories use to bring their subscription fees in the form of meat, vegetables etc. nowadays currency notes are also accepted. The fees are utilised for preparation of food during the festival.

Day 3 – The third day is the festival of the youths and social promotions. Heads of the male and female dormitories will bring food to their respective dormitories. This day is a day of social promotion because two heads of the dormitories are chosen annually. The coronation is followed by prayers for longevity of life and strength. Khangbon Kadimei Laam Dance in honour of the two promoted youth as the senior – most in both dormitories is offered in the evening.

Day 4 – On the fourth day boys and girls go for hill trekking at the nearby hills. In olden days they select kings and queens among boys and girls. Talent show mark the day and offering of food by the families of king and queen was also practiced.

Day 5 – A big cock is offered to the goddess of food grain for good harvest and prosperity in the coming year. The ritual ceremony takes place in the hearth of the houses. The cooked liver of fowl, rice and crushed ginger are offered to the goddess. The objective of the calling of paddy or prayer is to recover the wasted food grains while preparing, cooking and eating during the festival.