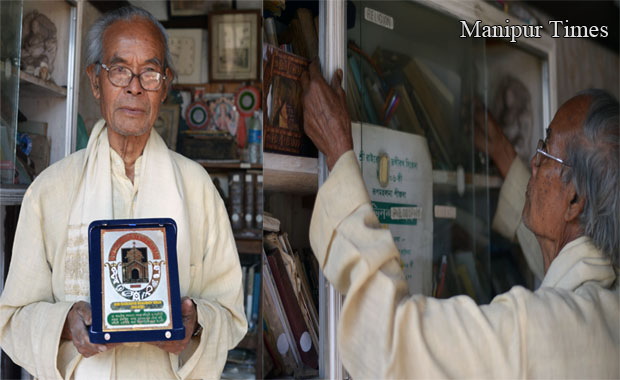 “In olden times we struggle a lot in the makeup part of artists as there was lack of colouring cosmetics unlike today. There was time when we even crush the white chalk to powder form and mix certain additive colours before we apply to our faces. Such was the hardship we face in the olden times “says eighty six year old Wairokpam Bhagirath Singh of Nambol Awang Leikai under Bishenpur District.

Besides acting in many plays from 1937 to 2010 Bhagirath has also written many drama scripts including award winning ones. Altogether a total of 25 drama scripts written by him have already staged since 1960. Some of the award winning plays are Sati Savitri, Kurukshetra, Chitrangada, SanagiChingsang etc.

The passionate artists have so far contributed to the growth of the performing art in Manipur through different ways.

Acting as the founder president of “All Manipur Rural Theatre” organisation in the year 1982 Bhagirath successfully organized Theatre Festivals of 25 rural theatre groups at two centres of Nambol and Laxmi bazar, MayaiLambi.

He was the Editor of “Theatre Centre”, a quarterly journal of the theatre group. His contribution towards documenting and keeping records of the play and art forms in his prime time was worth remembering as it helps promote theatre to his best try. He was an executive committee member of “Theatre Centre” Manipur in 1977.

He also served as a member of the “Standing Committee for Theatre and Jatra” of Manipur State Kala Akademi, Imphal in 1975-79.

Recognizing his contribution, he was felicitated by Arts and Culture Department, Government of Manipur and Rupmahal Theatre, Imphal on the occasion of “100 Years of Manipuri Proscenium Theatre” and “Centenary Celebration of Proscenium Theatre” on June 4 and December 24, 2002 respectively.

Born on September 26, 1927, Bhagirath was brought up in an atmosphere of theatrical arts as his father (L) W. BabuSingha was also a stage artiste and an actor of Mandap-Leela, Gostha-Leela and Goura-Leela, where he was popularly known as “Jagoi-Shaba” and “Nanda-Shaba” as he played the characters of “Jagoi” in GourLeela and “Nanda” in GosthaLeela.

Bhagirath’s mother (L) Imaton Devi was a “Potloi Shetpi” (Costume maker) and a hair dresser of the time.

Enthralled by his family legacy, he started practicing the culture of theatre and other allied subjects having the hobby and aptitude of art and culture.

His interest in art was enhanced when he joined the three months “Intensive Theatre Training Course” sponsored by N.S.D. New Delhi and M.S.K.A. Imphal hosted by Sangeet Natak Mandir, Nambol in 1980.

On Academic front Bhagirath is also the founder governing member of L. Sanoi College and Radha Madhav Sanskrit College, Nambol. Presently he is the president of Sangeet Natak Mandir, Nambol.

Earlier he was awarded by the Publicity Department, Government of Manipur for his script “Sanagai Chingsang” in the Best Script competition 1976.

He was also awarded best play Shield and Certificate by the same department for his plays “Sati Savitri’ and “Chitrangada” in the year 1969 and 1971.

He was also awarded “Lalit Memorial Award” for the year 2004 by TCM and Manipur Dramatic Union and “MeitramBir Singh Award” by Rupmahal Theatre on December 23, 2006 and clinched “

After Matriculation, he joined the teaching staff of Nambol High School in 1950-53 and continued study of Sanskrit, Hindi and Bengali. In 1953, he left the school and went to Kolkata for undergoing training in Dental Surgery at Calcutta Dental College and completed the course of L.D.S. (State Medical Faculty) in 1966.

He then appeared “VyakaranaShastree” examination under Assam Sanskrit Board, Gauhati and passed in the year 1967 and “KavyaMadhyama” in 1968. Following this, he also appeared and passed “Rastrabhasa Hindi Kovid” in 1968 and “Gandhi VicharDarshan” examination of RastrabhasaPracharSamiti, Wardha in 1969 (Gandhi Centenary Year).