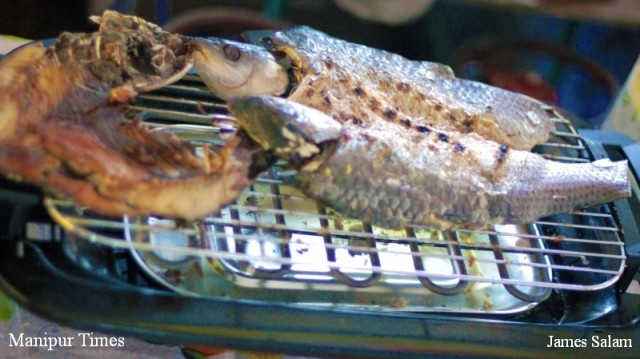 Food and drinks were displayed all around the corner in the rectangular set up of 4th Manipur Chinzak Festival, 2012at Shumang Lila Shanglen, Palace Compound. Food Festival, 2012 was jointly organised by Innovative Youth Development Association and Samban Lei Sekpil Foundation. About 400 Manipuri traditional dishes from various ethnic communities were available in a total number of 40 stalls open in the festival.

The unique point was the quality check of all the foods available in the festivals by Imphal West Chief Medical Officer.
New methodology of frying fishes through steam hosted by some young entrepreneurs was catching point of the Festival. It gives real taste and steam drying is more health oriented food preparation than the smoked ones say Rockson who bought the electric steam fish dryer from Bangalore specially for the Food Festival.

Families, young people were seen munching the food they love. The stall keepers were busy preparing the stocks and a team mate attending the customers in a ready to eat or packaged hand out was a common sight.

Few drop bins were seen around the corner for littering control. Plastic tables and chairs get occupied and vacated.  All but the place was in full motion. From food point to take up points the crowds congesting in the evening were exposed to a wide range of food items prepared by various district participants.

The phenomenon of Binasakhi meeting her friend Sakhitombi in the fest cannot be ruled out and they exchange smiles and words chatting how they enjoyed the food festival and the item they get from the corner could be an exciting point to ponder about.

Singju stall being lined up by a huge crowd was an exciting view. The wood handled kitchen knife never landed as it chopped the cabbages like anything. Boiled Chowahhai’ makes it way as it get mixed with ingredients like thoiding and mangal asuba along with other vegetables items. Salt and pieces of red chillies landed and the fibrous food is picked up between two fingers by the visitors.

Food lovers had a good time from window shopping the eatables to munching their choice.

Ukhrul team kept their food item in the famous Black clay pots.  The ten day festival gave the public a conscious mind about various specialised food items prepared in the State. It was a platform for the professional cooks and the stall runners got a chance to earn quick money.

There was lots of interaction among the participants coming from all corner of the State. It was a good platform for social integration. Food sense makes its way. People came to know about the speciality of the districts.

Colour meat in various tones and pieces, grilled, steamed, roasted and fried. Fishes were kept fresh and lively in an artificial plastic pond.

Various indigenous teas were served including Peruk Tea. Pickles were another site. Boras, Kanghou were some of the favourites.

People like the festival as it gives taste and the dedicated zone absorbs the mind of food lovers. There was a huge hospitality approach from the stall owners and the organisers have managed to come up with proper planning.

An air of expected flavour among the visitors and the delight from a quick bite makes the food festival a very happening one. A good eat out for a family table. Or a noisy group of young boys to a table of young couples dining to their flavour makes a happy site.

Manipur has taste, cooking sense, variety, and a food culture inherited from their ancestors. People love to try out for new things, a variety or an added flavour. The art of cooking with creativity and dedication could be well expressed by the food festival organised by the Innovative Youth Development Association and Samban Lei Sekpil Foundation.

The promotion of the indigenous food through festival where people from across the State participated in bringing out various choices and delicacies of the public was a welcomed approach. Bikramjeet Kongkham, Managing Director of Manipur Chinzak Festival Managing Council – 2012, Bobby James Wahengbam, Convener of MCFMC-2012 and their team did a commendable job for the welfare of the State.