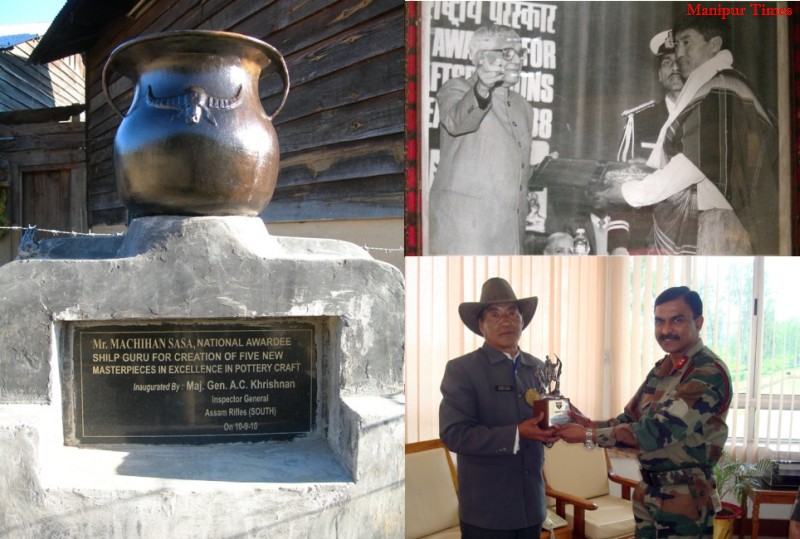 “After my national award in 1990, the government have entrusted me to train the art of making Black Pot to my villagers. Now 200 to 300 people from my village have started making pots and they are earning for a living. Now our village has two more National award winners on the same art. My youngest son is running a pottery shop at Vasant Kunj, since 2005. The powdered raw materials from Nungbi, Ukhrul is sent off to Delhi and groups of skilled potter who are five to six in number make the Black pot and other designs which is a big demand in the National Capital. Shop owners use to buy in bulks. The sale range from 200 to 500 pieces in one buys and the price is good. My 33 year old son is doing good business promoting the black pot and meeting the demands of the ever increasing buyers” says Machihan Sasa the two times National Awardee including the grand Shilp Guru recognition.

Sasa has 3 sons and 1 daughter. Eldest get state award, 2nd get district award last one in Delhi got an award for black pot making. Machihan Sasa held from Nungbi (Longpi) Kajui, Ukhrul District. He learned the art of making Black Pot which basically is the ‘coiled technique’ of pottery craft, from his father who was a potter by profession. Sasa was born in 10th April, 1950. In 1970, he started helping his father in pot making. Among 3 brothers and four sisters Sasa and his younger brother are making pot. His younger brother was trained by him. Sasa was not interested in school. So he joined his father. His Friends use to tease him passing comments like “young potter – don’t you feel shy’’. Sasa started his career in pottery at the age of 20.

In 1979 he started receiving awards at the district level. His first prize was worth 25 Paisa. He got the recognition from a fair. Next years, if you have new design you will get prize was the assurance the district fair committee of Ukhrul gave him and he started making new designs where he got acclamation. Sasa started getting grants under various schemes. The grants he got was Rs 5/10/20 thousands. Sasa have attended more than 80 fairs including international meets since 1979. He uses to get first and second prize in the fairs. Now there are more people working on Black Pottery. And the product is being used widely out of popularity and promotion. The credit goes to Sasa. “High profile people come to meet you, government is giving you aid. You are doing the best thing, we will also follow your path’’ was the ultimate words from his once teaser friends.

After my National Award people seek training from me. By then government encouraged trainee with a stipend of Rs.250 under the Development Commissioner (Handicrafts), Ministry of Textiles, Govt. of India, New Delhi. The first batch of 25 people was trained in 1990. Next year 20 more people and it went for around six consecutive years. Number of potters in my village and beyond was increasing in number. Every household makes their own they are expertise in the field now’’ says the well-built strong man Sasa with a smile. Uyan (cooking utensil) or Hamphai in his mother tongue Tangkhul language is the best choice of the people.

National award. Shilp Guru – 2009/10 (a cash award of Rupees 6 lakhs, a medal and a yearlong training programme). Foreigners visited my home. Army camp at Ukhrul kept a Show Room for him within the camp.

Lison stone is the name of raw material stone. It is black stone – Black serpentine rock which is found in Kapungrum, Ukhrul. Soil is salanali found near river Sala village of Ukhrul. Sala village has no inhabitants. Raw material – Four kilometer of rock. Soil we get from river bank. “We powdered the stone and filter the finest particle. The perfect proportion is 3 kg of stone and 2 kg of soil. We mixed the powdered stone and soil with water in a quantity not less and not more to make a paste similar to the flour paste in Puri making. Time consumption depends on the shape, size and design. It gets complete in half an hour or one hour. Polishing is done with green bamboo stick and then the pot is exposed to fire’’ explained Sasa Longevity – it depends on how we use it. Uyan (cooking utensil) lasts for 10 to 12 years as I have witnessed. If we drop then it breaks.

Small pots we sell at Rs 50/100. Rate varies with size. An individual can make 5 to 6 hampai a day. Next day it is polish for shinning. And after 2 /3 days we treat it with fire flames.

I am still making pots. I can maintain my family through my profession but I did not have the means to earn more for savings. In a month, if I make more pots I can earn Rs. 8/10 thousand, if not Rs. 5/6 thousand. Central Glass and Ceramic Research Centre, Kolkatta under Science and Technology scheme, have donated a machine to him after recognizing his work. The machine is valued around 7 lakhs. “It is not working as there is no electricity since the last 7 years. We work with generator sometimes” says Sasa. The machine could have enhanced more productivity and Black Pot would have reach to different corners of the world. But electricity has hampered the progress such is the limitation of running an industry even at micro level in a state like Manipur. However the increasing number I feel happy when army man posted in our district help me in solar light, syntax water storage, regular water supply.

Hampai is a specially design pot with locker system. “The pot design came in my dream. I was digging and I found some well design small pots. I memorize my dream when I realize it was a dream as I woke up. I ask my wife to powder the stone and I was determining to work on the design. I made 5/6 designs and displayed them. People like the design and purchased them. That time I sold my product named hampai a pressure cooker model at Rs one to Rs one and half. It was hike as per improvising and demands from the public. In a big basket of Hampai we get Rupees 15/20. Some buy at Rs 2. I get a minimum of Rs 10 those days. When people ask me to put designed cover at Hampai, I started working on it. I put the pressure cooker type cover. I came up with the locking system with a turnaround unlocked model and reverse turn lock. I sold the new design Hampai at Rs 3 to Rs 3.5. With improvised designs it was sold at Rs 10 and above. That was during 1980. Now Hampai is priced at Rs 500 to Rs 1000. Beginning days. In the earlier days, we have 5 designs now we have 100 designs from my side. Koklei is shorter. Turkha is for keeping water or kharung type. We also make Kettle type. Mug we make. A mug is sold at 200. Milk pot etc. sold.

Pot is the source of earning. 7 days of making there is no space. Scheme like among the locality provide space. We cannot stock. So we have to halt. We need a go down we can make more pots. Be it private or Government initiative. They can keep good stock. When we keep on making pots, in two to three weeks, space became a big problem. If 10/20 people come together and make a big house it will be a good place for keeping stock. People come to our village. They take in a bamboo basket and carry them for sale.