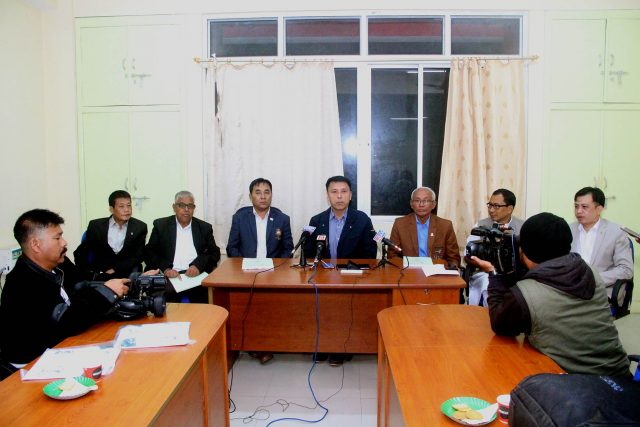 Imphal, October 31, 2018 (DIPR): Education, Labour & Employment, Minister Shri Thokchom Radheshyam, also the President of Manipur Olympic Association, said that the host state Manipur could bag the overall team champion in the 1st North East Olympic Games, 2018 with the blessings of the people of the State.

He made the statement at the Press Conference held in connection with the recently held 1st North East Olympic Games, 2018 at Manipur Olympic Bhawan, Khuman Lampak.

The Minister hails the coaches and the players representing the State for their dedication and hard-work to win this coveted title. Extending his deep gratitude to all, who have made this historic event a grand success, he said that the event has been successfully organized because of the support and encouragement from every section of the society.

Khuman Lampak Sports Complex, he added, is a boon for the State and especially for the sportspersons as the complex is equipped with necessary facilities of stadium, arena and sports venue. It is the pride of the State that it is one of its kinds in the nation, too.

It may be mentioned that the 1st North East Olympic Games, 2018 was participated by sportsperson from the eight state of the North East India competing in twelve disciplines. The conference was also attended by the Manipur Olympic Association. The next edition of this Games will be held at Arunachal Pradesh in 2019.