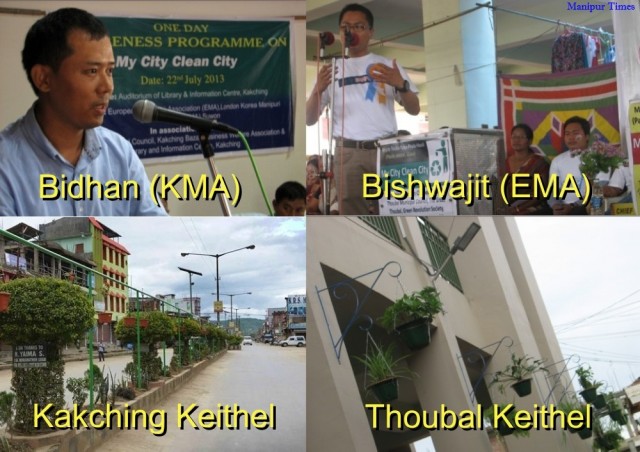 With a new venture to give our  cities a green look and garbage free all the time, Manipur’s Thoubal Keithel and Kakching Keithel have been decorated with many hanging flower pots and  installed portable waste disposal bins at several locations  for collection of general waste and recyclable waste. It is also planned that the collected recyclable waste would be handed over to the private firms collecting recyclable materials and to the private recycling plants operating in Manipur.

The idea of this mission My City, Clean City is inspired from the life experiences of the members of  European Manipuri Association, London and Korea Manipuri Association, Suwon while living away from home in foreign countries. This initiative is also designed to work as a collective effort by involving local government units such as municipal councils and local NGOs in order to bring changes in the existing norms of that particular locality. Hence this initiative remains supplementary to the existing public and voluntary units operating locally and during such collaborative initiative process changes will be brought to the hearts and mind of local community and keeping one’s environment neat, clean and green become a moral responsibility for the people.

The main concept of this initiative is to get involve the larger community towards the effort of making a green and garbage free city which is a communal place. Earlier, European Manipuri Association initiated such campaign in the historic Khwairamband Ima Keithel, a unique market place run exclusively  by woman and the only in the world. ‘Blooming Manipur Project’ was initiated as an experimental project but at the moment it is functioning as an autonomous body after the completion of the project timeline with EMA.

“My City, Clean City” is an initiative taken up collectively by the community of Thoubal and Kakching to make their communal places clean and beautiful. Moreover, it is to instil the spirit of community participation and civic pride for their towns, city and villages.

Regarding the city beautification drive, Okram Bishwajit, Chairperson of European Manipuri Association, in an exclusive interview with Manipur Times, said that the city beautification and cleaning campaign with installation of hanging flower pots of different varieties is a part of the strategy to bring a positive attitude to themindset of the people of Manipur filled with the reminiscence of conflicts, violence and a society in turmoil. Moreover, it is a mission to save our environment, make the people healthy amidst a healthy environment.

“We, the international Manipuri diaspora, living in European and other developed countries, have experienced the comforts of developed countries. However, we can’t spend our life comfortably there while our people in Manipur are living amidst dust. We like our fellow Manipuris to enjoy the fruits of development. Manipuris living abroad always care for their home state right from human rights to infrastructural development and environment. City beautification program is part of our contribution we can extend to the people of this state”, said Bishwajit.

He said that European Manipuri Association, EMA which is eleven years old has about 62 active members at present.  Bishorjit Elangbam , a senior member of EMA living in London first suggested the idea of installing hanging flower baskets  in  the historic Ima Keithel . After a formal project proposal and general consensus of majority of the members of EMA, the ‘Blooming Manipur Project’ was launched. The initial implementation was done through financial contributions from members and well wishers of EMA.  So for the first time, Khwairamband Ima Keithel was adorned with hanging flower pots with the help of volunteers and ex EMA members living in Manipur with the approval and moral support of Imphal Municipality and concerned government departments. The experimental project was planned to run for one year by EMA. It’s been almost two years since its launch and since then the idea, concept and implementation has also evolved through adaptation to local needs.

To keep Thoubal keithel and Kakching keithel neat and clean by decorating it with beautiful hanging flower pots and systematic collection of waste particularly through community participation, European Manipuri Association tied up with Jiten Nongmaithem, Chairman of Korea Manipuri Association to initiate a city beautification program under the theme “My city, Clean City”. The financial, physical and moral contribution from all the members of EMA, KMA, NGOs , members of the local community and both the municipal councils of Thoubal and Kakching  has helped in successful implementation of the initiative.

Nahakpam Bidhan, a member of Korea Manipuri Association told Manipur Times that market place is a common place thronged with all sections of the society to sell and buy various things. Making our cities and communal places green, neat and clean becomes quite essential. After all, the changes will bring a positive vibe to the people resulting in good health and a harmonious society. Almost all cities in Korea always look green, neat and clean. As a result of this, the market placeslook like a garden.  The people there have the habit of using dustbins to dispose of wastes and littering is a taboo to them. It’s quite astonishing to see the market scene of Manipur. Almost every empty space is filled with garbage and foul smell of rotten things.People throw away their general refuse and solid waste materials improperly.  It’s a disgrace for all of us to showcase our historic Ima Keithel and other markets of the state in its present scenario in the eyes of foreign tourists visiting the state. We need to imitate and see how the other developed countries are trying to keep their markets environment friendly.

He appealed the people to participate in this initiative by sharing their thoughts and by extending full co-operation.

“Inclusion of solid waste management education in school syllabus to bring awareness to the children is the need of the hour. To make a garbage free zone and bring a good environment, awareness on the part of our people is a must”, said Bidhan while assuring all possible help from the side of Korea Manipuri Association to make the state’s markets places always look green and garbage free.