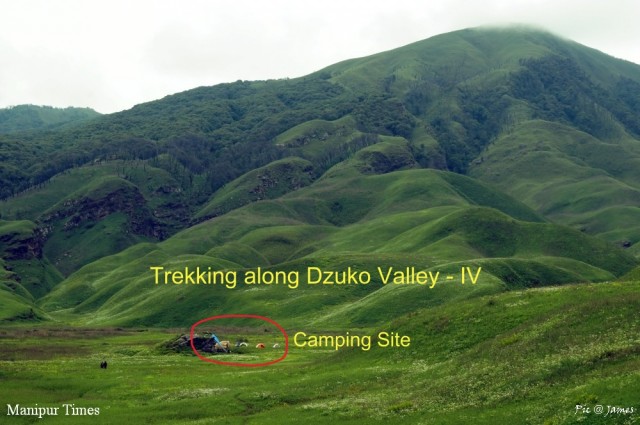 Listening to the sounds of running stream is soothing to our ears and the very sight of clear water making a pace in its course is equally a pleasant sight.  The shade from the bridge added with cooling effects from the river stream make our sunny day shelter.  In fact there are no big trees in the plain area where one could sit under a shade. The vast area of land is covered by grass and flower plants. Of course there are big trees growing on the hill but not on the plains. Mention also be made that there are no fruit bearing trees where one could munch or take a bite. The valley is totally blunt with eatable stuffs. We have never seen a fish in the kilometers long clear river stream.

Night set in and our team members who have gone trekking had gathered at the Central cave.  We share the stories of the day, there was zeal in storytelling. We talk like we have discovered the land. In fact every moment of our trekking was worth treasuring. You see a rock cave where there are names encrypted. It gives a literature and human touch but it is equally distracting from the natural beauty. However some moments reading the names is quite a fun with different hand writings.

Well kitchen time, onions, potato, fermented fish, salt, rice, dal, tin fish and other stuff have made their way. There was some light from the fire flames as I see the kitchen team in laughter when they exchange words of joy and having fun cooking food. Engaging in some activity or the other with responsibility is a good team spirit. Well fun was everywhere.

All set for some good time we round up at the cave top. Roze is a good mouth organ musical instrument player. Sorri Senjam eminent singer of Manipur who was in the trekking team did us some numbers where we all sang together. It was when everyone takes their own turn humming the best. The sky was clear, stars were twinkling bright.

As we look around there were some light in the tents, other trekkers have lit up their camp. In complete silence we hear them yelling and shouting loud out of fun. There was a silence thrill as the night set in. After a good meal we slept. Some of our trekkers played pokers in their tents and I doze of listening them in fun and engaged mind.

Well on our fourth day, some of our team plan to trek Mount Jafpu, the second highest peak of Nagaland located at the left side of Central cave. We decided to take the Jafpu river streamline.

After a good walk and a hill mount along the streamline of Jafpu River we sighted the vast river rather the biggest stream in the valley. Bamboo shrubs at this part of Dzuko valley are as tall as 7 feet and 5 feet. As we walk pass we came along waterfalls, and rock bedded river which is as wide as 20 feet to 12 feet.

We sighted some trekkers playing in the waterfall of lesser height, say 6 feet fall. The rock bed was regular it looks like a uniform floor. Clay red rock bedded river with some tadpoles making their way. Well we walk for another hour the river course is diverted at some point where we even cross a tiny wooden bridge and mounted on a rock hill. Thicken with tall bamboo shrubs we walk through.

Green vegetation on tall rock cliffs and a grand view from a hill top where we rest for a while.  The day was not sunny and we rest napping in the sun and it was a big surprise to sight the valley as I woke up in unconscious mind. It took me seconds to recall that I slept atop a rock mountain and having seen the mounting hills just in front of my eyes as my biological focus zoom to clarity and capture the scenic beauty with my own eye cam.

Time to head back well it was Suresh and me who stay back at the point. Our other team had moved further to follow the stream. Another discovery was that we came across faeces which indicate that there are some wild animals loitering in the jungle. Well we have come across two hunters with their hunting guns taking position along our way. Perhaps waiting for a good appearance to take the shot. It was on our way to the valley some miles away from the guest house.

We head back and met some of our members heading along the streamline. Well we stop by at a river bank sitting together and entertaining ourselves with exchange of words and funny stories from a good story teller in the team nicknamed Bro’. Well the togetherness was stunning. Our muscles got relaxed as we sit and rest in fun.

We came to know that Stallone our wild life photographer in the team had caught a poison less snake from nearby our kitchen at the Central cave. This is the second snake he caught during the journey the first was a deadly poisonous snake. We were so glad that he had picked up the snake as it was around our surrounding.

Full power shouted the team as we head back to our tents. It was in the dusky hour and we have to make our way before it gets dark. Most of our torch lights have run out of battery. The other teams who head out for Japfu peak has not make it to the summit. They came back half way due to lack of time or the team has decided not to make it to the summit. But we were so glad to listen to the deep wood exploration. Some of our team has also gone to the guest house to buy some stuffs of their own. Well our day was bright. We felt like we have become stronger each day. Our endurance in trekking was improving. There was this confidence of moving ahead. Our legs keep on walking and we were exposed to so much of nature’s beauty in its best. The adventurous mind was tuning and the moment of joy in the company of fun loving and careful trekkers was maturing as we spend our days in the best possible way.