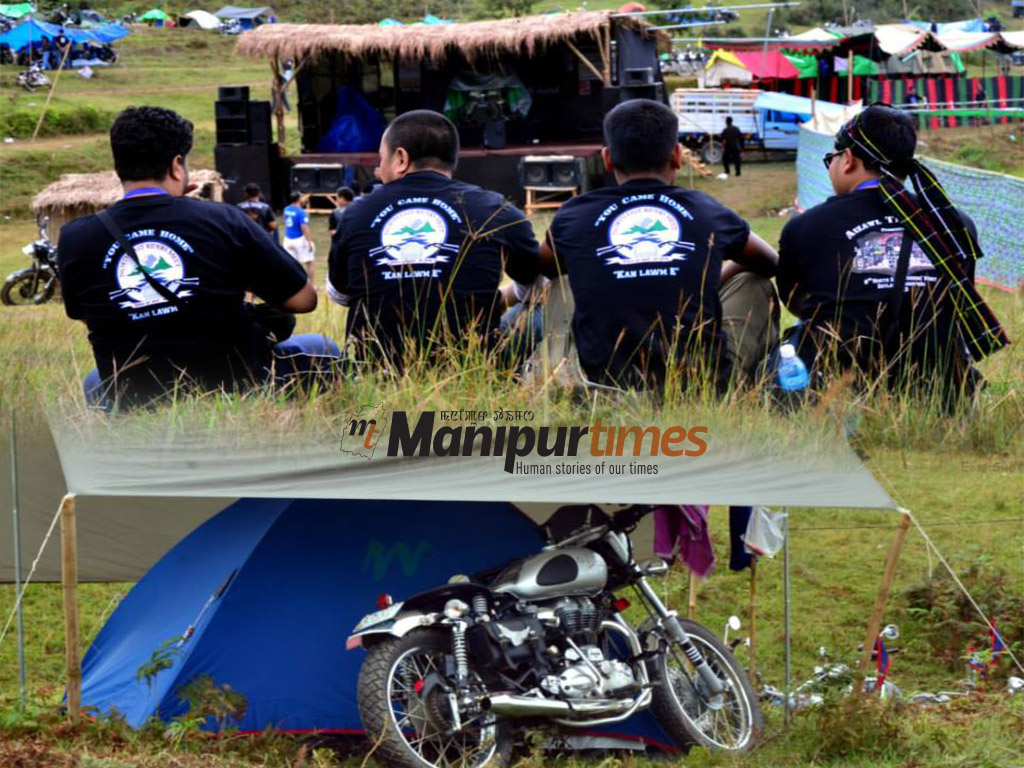 Popular Rock band ‘Boomerang walked down the camp and did their numbers. It rained but it was the night out with rain coats on or a jacket, there was this big bon fire to dry and keep everyone warm by the side. Some cultural programmes like the Mizo traditional dance and Bamboo Dance were performed from a group of invited artists.

As the night became late the crowd drop to lesser number.  But a bunch of good friends sat around the fire mostly ladies who were chatting and having good time. Richa from Assam Bulls, Inbar from Israel, Rosalynn and Rinni of Aizawl Thunder, well few riders have a rain drench night and sitting by the fire was awesome and drying for a warm sleep.

During the camping a charity ride was also conducted where the riders donated fund and it was distributed to two needy elderly citizens and their family. The cause was good and swift with few crowds and the formal function of speech delivery and thanks giving from the village authority not far from the Camp site. The moment was special as we got the chance to interact with the people around and we were received with hospitality. There were some curious children who peep out of their window and wave their hands, their cheeks red and hairs undone but sweet looking. It really adds to some pleasant thoughts when we realise that they seem switching on to some Cartoon channel and watched the same machine buzzing to thrill them with various characters live in front of them.

Well the meet matured, everyone make friends with one another. The grass on the hill slope, the pitch on the roadway became familiar. The days has add enormous blow in the mind of joyous mood. The green carpet grass walk around has put everyone on nature’s calmness with green sight all around.

Time to part and head home for another long distance ride has approached. Early morning wake and a luggage packing schedule with a light breakfast. Well club ride out of the camp in group make way.

On the way a bullet collided with a Tata Truck and luckily the rider and pillion did not sustain any injury, the RRM boys were thrown out on the wall of the hill slope as their rear tyre hit the back wheel of the Tata Truck coming in opposite direction at the turning. The front wheel got screwed, the pump broken and headlight distorted. Riders stop by to help. The truck owner was called and Aizawl Thunder the host team also intervened and settled the issue. The motorcycle was taken to Aizawl and kept at the Youth Hostel where the riders stay the night. The vehicle was repaired the next day and in the evening Royal Riders Manipur rode out of town for the next destination at Silchar. All other clubs have left for their home town in the morning.

On the way there was a road block as two heavy vehicles got struck and the journey got delayed. The clock strike 10 but the riders were half way to Silchar. Ahead the night drive was amazing, there was no one on the road. The fore light appeared like a moving beam in the dark night. The sound of the motor was awesome, it became smooth and uniform

deprived of other sound. It was drizzling and we stop by for a cup of tea at a highway hotel. Wet cloths, cold weather was troubling but the hot tea has done wonder for few moments and as the rain stopped, riders hit the road with a happy accelerator. Miles to go but leaving behind the corner rides of the hill and switching on straight road was getting a bit naughty and accelerator happy. There was this lightness in the metal as it went broom broom. Sleep was far behind as the clock struck 1 am.We had dinner at a highway hotel which remains open throughout the night.

We reached the town and there were street light ambience, the busy market place look abandon. The banners at the building were differentiating sight than the open air highway ride as we drive to our hotel for the night stay. It was already 2.30 we go to bed after cleaning our dusty face. We slept till late in the morning and went shopping for crackers as Silchar has factory, somebody bought some spare parts of bullet. Well it was around 6 pm we reached Jiribam after 2 hours of drive. It was a happy moment when we saw elderly people attired in Manipuri Dress roaming aplenty on the streets along Silchar – Jiribam Road.

Back to police barrack Jiribam and a yummy dinner only to wake up early for reaching Imphal in time. The road from Barrak Bridge and Nungba was horrible. A bullet broke down in between and we were stranded for an hour. Only to cross the mud filled road was a huge chapter as it was way beyond motor able. The snail trip was  tiresome in mind, it was like we press ourselves to overcome the struggle and when we were lifted from the mud grip to a rolling road there was a relief sensation but it was already dusk and we have not had our lunch. We munched our food at the hotels in Nungba and continued our ride.

To a big thrill we were being received by around 20 riders at Keithelmanbi including executive members of RRM. It was a home coming reception after ten days of ride and they have driven till Keithelmanbi and were waiting for us. Our tired muscled suddenly gain some energy, crackers on the road and when we were the only guys on the road the laughter, the sharing of the trip tales, it was real brotherhood.  We were like in a family, a family where we share the same spirit and adventure. The sense of togetherness was strong.

The meet was all but a grand ‘on – road adventure and camping, getting to know people and places. Just driving and driving till you meet the other drivers and drive together and drive back home loaded with happiness and thrill that you cherish for a very good time.

The 2013 North East Riders Meet under the theme ‘When We Meet We Grow’ at Mizoram attended by 300 bullet riders was amazing and to tell you these riders were the tourists of their own region and to an extent North East India has become a hot spot of adventure tourism.

Next year North East Riders Meet will be organised at Manipur and more riders are expected to take part scheduled around November 2014. For the same Royal Riders Manipur have started exploring places for the right venue to entertain the enthusiastic riders and to take them to tourists’ places in Manipur for a riding exploration.