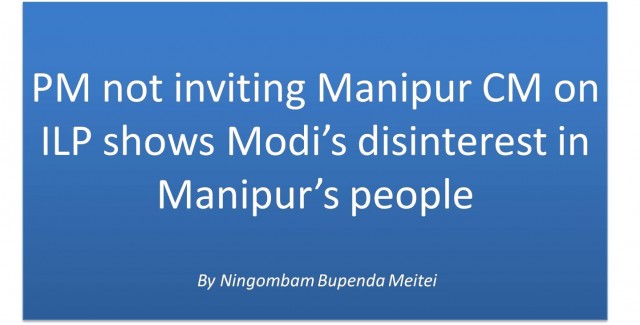 Prime Minister Narendra Modi, who invited Chief Ministers of Uttar Pradesh, Maharashtra and Karnataka for discussions on drought and water scarcity situation (reported in NDTV news “PM Modi To Meet Chief Ministers Of 3 Drought-Hit States Today”, dated 7th May, 2016), has, so far, no time to even give an appointment for Manipur Chief Minister Okram Ibobi Singh to call on. What could the people of Manipur expect from such Prime Minister who has no interest to invite the Leader of the people of Manipur, who is the Chief Minister, to discuss about the implementation and issues over Manipur’s Inner Line Permit?

Whether Manipur Chief Minister is in Kolkata or Deputy Chief Minister is in Imphal, or whether BJP Manipur has met the Union Minister of State for Home, the question is – who has stopped Prime Minister Modi, who is busy in travelling around the world, to visit Imphal to meet the people of Manipur so that the Prime Minister himself realises the necessity and genuine demands of the people of Manipur, who are still being threatened by the demographic, economic, social and cultural invasions taking place in Manipur to undoubtedly destroy the world of indigenous people of Manipur?

PM Modi’s political interests in bringing BJP in Manipur by his deliberate silence, maintaining a stoic silence to the ongoing Manipur’s ILP public movement, so that there would be further more polarisation in Manipur before 2017 assembly election and such polarisation, like it has helped BJP in coming to powers in other states, is also expectedly perceived to be causing BJP to get some seats in Manipur Assembly. PM Modi’s commercial interests in his “Act East” by passing through Imphal without getting Inner Line Permit implemented in Manipur clearly expose that PM Modi and BJP are only interested in the commercial profits which are to be gained from Act East by using Manipur as commercial transit and connecting links but not for the genuine protection and welfare of the indigenous people of Manipur.

If the Prime Minister thinks that BJP can come to power in Manipur in 2017 by getting the entire 20 MLAs, whose seats are reserved for Scheduled Tribe, in the form of the support from non-Congress parties, then to get 31 seats out of the total 60 seats in Manipur Assembly to form the non-Congress or BJP led or NDA or NEDA government in Manipur, Modi needs another 11 seats from Manipur valley. Can Modi garner 11 seats from Manipur valley in favour of either BJP or NDA (National Democratic Alliance) or NEDA (North East Democratic Alliance)? Can Modi ever talk of replacing the present Congress government if Modi fails to convert the Manipur’s 3 bills into act and implement ILP in Manipur?

If BJP is going to claim that – “if BJP or NDA comes to power in Manipur in 2017, then within a month, Manipur’s Inner Line Permit will be implemented”, then it will be akin to again reiterating the same old rhetoric of Narendra Modi’s line “Come May 16, Bangladeshi immigrants must pack up” which has led to a complete empty slogan and lies in removing Bangladeshi immigrants from Assam or the North East India, even till today.