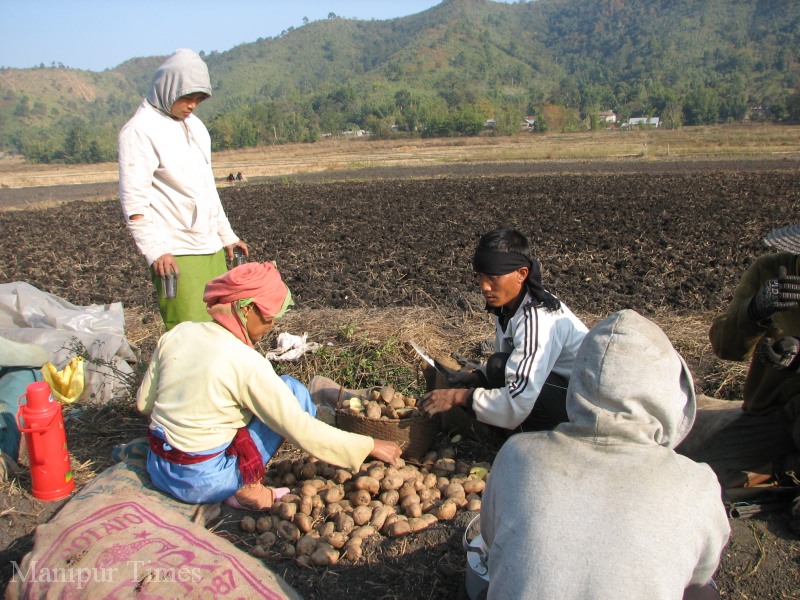 Esikha, a fertile place in the northern side of Imphal Saikul road is a small village with a population of about 500 people from 64 households. Majority of the inhabitants are engaged in farming and construction works. It is hard to find any government employees in the village.

In spite of all these odds, the farmers of the village toil hard to improve their lifestyles. Their efforts are result oriented and hence farmers feel that potato farming can yield more produce that will in turn enhance their economy.

About 60 members, from each households of the village, practice potato farming. They cultivate potato in their own land. The total area of the village where potatoes are planted is about 40 pari.

She plants potatoes in her field that measure about one lourak in area (an area of about 0.31 acres). It consumed about thirty bags of potato seeds to sow this area. The seeds are bought from the market. A bag of potato seed cost 700 rupees this year which doubled since last year.

She says that preparation for cultivation of potato starts in the month of December-January, after harvesting paddy crop. The remaining hay after harvesting is burnt in the field to improve the fertility of the soil. The field is then tilled three to four times by using a mini tractor (Kubota). The tilling charge of a Kubota is s 600 rupee per till and the charge of the hired workers is 150 rupees per day. It needs a manpower of about 8-10 persons to finish the plantation of potato a field of one sangam. So, normally a farmer spend around 20,000 to 25,000 rupees per sangam while preparing the seeds and tilling the field.

It takes about three months to harvest potatoes. The productivity per field of a sangam is about 100-120 bags. In the harvesting time many traders rush to the village and buy potatoes. The farmers themselves sell it at markets like Lamlong Keithel and others. The price of potatoes is fixed based on the condition and productivity of it. It varies from 500 to 1000 rupees per bag of 50 kg.

A farmer gets a profit of about 25,000-30,000 rupees per sangam when potatoes are harvested. This is the amount after deducting the expenditure of the preparation of the field.

Naoroibam Subadani says that having a field of one lourak earns her family about 50,000-60,000 rupees a year. The productivity of the last year was about 110 bags per sangam. Swampy soil condition of the village makes it favourable for potato farming.

Oinam Hemanta, 40, another farmer of the village said that he plants potatoes in an area of one sangam. He has invested about 25,000 rupees in preparing his field. It takes about 15 days in preparing the field. The variety of seed he sows is known as Coffee Jyoti Jalandhar.

Another farmer Binoy, 35 has a field of one pari.  He says that last year was a significant year for him. He invested about 80,000 rupees and earned a profit of about one lakh rupees in return after harvesting it. He said that the productivity last year was of about 600 bags. He sold the potatoes in two phases. In the first phase, he sold at the rate 650 rupees per bag. In the second phase, the price of potatoes was increased up to 900-1000 rupees per bag. He also added that the potato farmers earn more profit during economic blockades at national highways.

He said that the farmers of the village are very hard working. They will be engaged in potato farming right after the harvest of paddy crops and the cycle continues without a stop. There is nothing as an off season in the village, as they are occupied throughout the year.

Potato farming in Esikha started in 2002 on a small scale. In 2005, after the Agriculture Department of Manipur tested the soil, farmers started potato farming on a large scale in this village.

The farmers of the village have a faith that potato farming will make them rich farmers in the near future. Their faith and dream will come true if they continue with the same enthusiasm and effort.

Favourable soil, work culture and hard working farmers are the factors behind the success of potato farming at Esikha village.