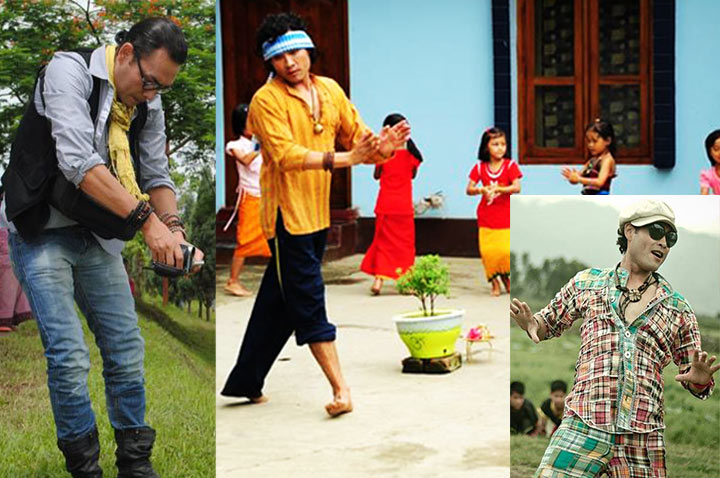 Say helloto rising Fantabulous Film Star of Manipur —- Gurumayum Bonny Sharma. ‘Ubada thuk laoba faobara!‘, along with his husky voice and a loud dramatic dialogues, he has succeeded in imprinting many unerasable catchy dialogues on the minds of audience.

He won’t mind calling him ‘Yo Sanatombi’ or a reckless teeny-bopping ‘Yaiskulgi Pakhang Angaoba’, or a simply mindless,  culturally-polluted songster of ‘Western Sankirtan’. He just did it! As he appears on the silver screen, Bonny charges up the heat and quenches the entertainment thirst of Manipuri cineaste. It won’t be an exaggeration to tag Bonny as ‘Fresh and Trending’ now, as audience voluntarily ups their thumbs for him. In the galaxy of Manipuri stars, he’s now shining bright. He is like a burnished apple in the eyes of Bonny-struck diehard fans.

But his struggle to get a foothold in the film world wasn’t rosy and easy but indeed teary and weary. In an exclusive tete-a-tete with Manipur Times, at his residence located at Keisamthong Maning Longjam Leikai – Imphal, he stated, “I was not only born to a poor but brought up in a family that can be said as a broken one”.

About him, much have been updated and heard. But his real success-story lies in the back-story of his real-life, not reel-life. The reality is – before he treads the board, he took many heroic roles confronting for exigency with an unkindly reality of impoverishment, poignant pains of sheltering under the roof of a broken family, tearful of living in a blurry and unsecure future.

Taking the Manipur Times down to the memory lanes of his struggling past, Bonny said, “For survival, what work haven’t I tried …., I tried everything! …., I spent my month-long school vacation as a helper for brick-masons in far-off construction sites; I shouted loud on sunny streets to sell weekly journals; I worked as news-hawker to support my family; I dropped my college out just to give a helping hand for a fistful of meals… I did everything; from pulling pedicap to selling second-hand clothing in flea-market.”

In fact, Bonny didn’t have a magic wand that could help him to become a star from a hand-to-mouth person, nor he did have a magic carpet that helped him a direct-landing in front of the camera. All he said was, “It was a result of decades-long efforts of hard work, endurance, persistency and firmness in my chosen path, more over an undying love and appreciation for theatre and art.”

Did Gene Factor Play any Role ?

Bonny, the youngest of four siblings, was born to theatre loving parents where he saw his mother as a one-time phenomenon theatre artist at Manipur Dramatic Union (MDU) who won many awards and accolades in her time, during 1970s.

Her mother, G Surjamukhi Devi, in her erstwhile was known popularly as ‘Thambalnu Shabi’ (Thambalnu actress), but her destiny changed her from an artist to a local charcoal-seller and street-vending woman due to financial troubles.

Bonny’s father, late G Robindro Sharma, was also a phenomenal theatre artist at MDU and a photographer at Directorate of Information and Public Relation (DIPR). But his father left his photography job, on his own personal accord, during his early days. Bonny said that the most valued and memorable gift from his father was a secret mantra that has helped him to reach the place where he wishes to go — “Follow the river, you will find the sea at the end.”

Bonny spent his childhood days at her maternal grandmother’s house at Nongmeibung, where he started his schooling in a government-funded child centre. Onwards from very early stage of life, Bonny took part in facing their family’s economic challenges where his reality demanded him to keep his childhood funs and education at a distance.

But on the flip side of his childhood, like his theatre-soak parents, Bonny began to dear at theatre,  and slowly but steadily his life began to get soaked irresistibly towards theatre. He said with a sense of humour, “It seems like my Baba and Emaa have transferred all their genes to me, my vein carries the very genetic love-blood of acting, theatre transferred by them. He further added, “I was more interested in learning modern theatrical skills than school-books, and my college experience was like a ink-blotted surface”.

Many a times, Bonny himself thought of putting a full-stop to his theatrical career due to incessant attacks of impoverish reality, but never he enacted. Cherishing his father’s mantra, he kept on following the river, to find the sea. Before he made his appearance at his first film at Chou-in-Lai’s direction ‘Lanmei Thanbi’ taking an antagonist role, he had spent nearly a decade in theatrical world as a trainee, as a small time junior artist, as an simple artist.

Though surrounded by extraordinary challenges, Bonny kept on flowing  in the ‘stream of consciousness’ and enroute to his journey he was awarded National Scholarship from the Ministry of Culture, Government of India, under the mentorship of Guru Rajen, who was working with courtyard-theatre (Shumang Lila). Later, he also got the ‘Best Actor’ Award in One-Act play at National Youth Festival held at Hyderabad, wherein he played the role of ‘Eklavya’, — self-learned mastery in archery who gifted his right thumb as Guru-dakshina to a an archer guru (Drona) as a sign of rendering respect and regard —, of Mahabharat epic.

Like the role he enacted as ‘Eklavya’, this Fantabulous Star has a high respect, love and courtesy for all of his Gurus’ he ever met in life. Introducing a long list of names of his Gurus, he expressed great respect and gratitude towards them while having this  conversation with Manipur Times. He said, “All my Oja (Guru) are my guiding spirit for me and still I’m a still learner before them, still learning.”

So far Bonny has done more than seventy films, and recently ‘Sahitya Seva Committee’ presented ‘Best Actor’ award to him for the film Western Sankirtan and the film itself also got the award for ‘Best Film’ of the year.

While Manipur Times enquiring about his current challenges in his life, he said that it is very hard to become a true professional actor in Manipur, where the market is small, and destructive-criticisms are high. Further he maintained, “For me, being professional needs a lot of dedication. It demands you to sink fully in the Kala (art), it demands you to oust your inner-self from the world of ‘maya’ (illusion), one has to become like a saint.”

He further said that Manipuri film environment is very unique and different. Expressing his laments, he said, “Before premier show, pirated video appears in this small market, even Hollywood can learn this part from us. See, our producer and production houses aren’t like that type of big money’s Warner Bros, Colombia Pictures etc. So, when this kind of piracy happens, many of our aspiring producer’s future collapses with the lost of all his invested time, efforts and money, this is quite disgraceful.”

At present Bonny is having a tight-time in scheduling for his upcoming four films, and he’s busy trying to transpired himself to a perfect image of a personnel of a Very Dangerous Force called ‘VDF Thasana’,— his own home production,— a must-watch film for his fans which he is sure to cast some of his stardust.

At the departing moment of this tete-a-tete, Bonny just said one important tidings to Manipur Times which would be a tragedy for Bonny-struck girls. He said, “I am married now… with Motibala”. This newly married star keeps his love-story off the record!