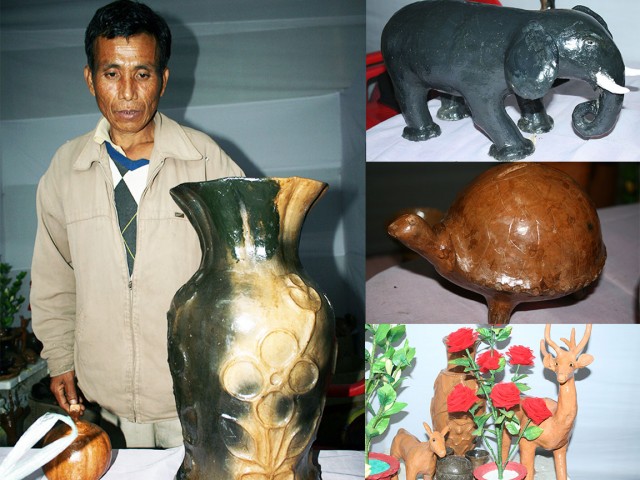 Located at a distance of 25 km towards east of Imphal city, Andro an ancient scheduled caste village in Manipur is popular for its aesthetic craftsmanship in pottery, rich cultural heritage and other artful creativity. Andro creates an authentic Manipuri village along with the cultural complex established and run by the Mutua Museum Imphal. This village is home to the Andro Gramshang Museum, which comprises different varieties of traditional pots namely, Pudond Makhong, Walom, Ngangkha and Yukhum. Among other varieties are Wangkham, Kambi, Kambi Makhong Panba and Eshaiphu.
For many families in Andro village, making of traditional earthen pots has been another major source of livelihood option for years. Pottery has been a source of living for one Andro family of Sarubam Surchandra son of Sarubam Gopal of Ando Khunou Leikai who supports his family with three kids, wife and elderly mother.
The 50 years old Potter Surchandra was initiated into the profession at an early age. He learnt the art of pottery from his sister in law Sharubam Dharmo Mala, wife of (Late) Sharubam Lolito of Andro Khunou Leikai, an elderly renowned professional potter of Andro. Young Surchandra while keenly observing the activities of his sister-in-law making various earthen pots and other creative items enthused to start such a craft in his life.
He makes various artistic and decorative earthen items such as, crocodile, Goddess Emoinu, Lord Mahadeva, Budha, elaphant, deer, Sangai, tortoise, pumpkin, chili and other creative arts like crying mother monkey with baby on lap. He also makes pots of different designs like Walong, Ngangkha, Koret and Esaiphu which were widely used in many traditional rituals of Meetei community. Earthen pot ‘ Walong’ is commonly used in cooking rice and curry for social ritual feasts while ‘Esaiphu’ is used for storing drinking water and this particular pot is used in the religious rites and rituals of Meetei Lai Haraoba or Lai Ikouba.
According to Andro Customary law, unmarried girls are not allowed making earthen pots. Pottery can only be done by the married women of Andro. Those married women who undergo a ritual ceremony ‘Thou Chanba’ (Job assigning ceremony) are allowed to make pots. Traditional methods of pottery are replaced with a flat stone and a bat, which is used to beat the mud into a required shape. Along with pots, the women also make vases, piggy banks and lamps, Surchandra revealed.
Brought up in a poor family background, Surchandra studied up to class X and started helping his poor farmer father in daily family maintenance by engaging himself in field work. He could improve his family economic condition when he takes up pottery.
With Costumers’ demand for the various earthen pots and other creative items on the rise, Pottery has been a thriving business now with good income. My products continue to receive demand from the costumers. I sell the decorative items like earthen elephant at Rs 2000, Sangai at Rs 1500 to 2000, he said.
Leitan (Clay) and Leichareng (Sand) are the best raw materials the professional potters mainly use for making various earthen pots and other creative items. After removing unwanted residues, Leitan and Leichareng, properly mixed with little amount of water, are pounded in a Shumbal (Mortar) using pestle until it forms a sticky paste so as to make the raw-materials used in making the pots and other items very strong and hard.
Using the earthen paste, potters make pots and other items. The finished products are then dried up in the sun for about three to four days and heated them up in fire when they are completely dried up. Heating process should be done when the finished items are completely dried, otherwise they crack if burn in the fire while they are still wet. A Potter usually takes 15 days to give a finishing touch to his work of pottery while going through all these procedures, he said.
Potter Surchandra makes pots of varied designs with the paste using traditional methods without any modern tools or technology. He uses a small stick to pound the paste to form whatever shapes or designs he wants to prepare. He doesn’t apply any colour paint to his earthen items, but manages to give a natural look.
He said that his wife is also expert in making various pots and other toy items. The couple can now comfortably maintain the family with the income earned from the venture.
In fact, pottery has been one of the languishing crafts in the state. I have a big plan to preserve the particular craft by expanding the business and providing training to the people desirous of making earthen pots and creative items. However, my dream cannot be materialized till date with no enough funds. I need some grant from the Government to materialize the dream, he said.