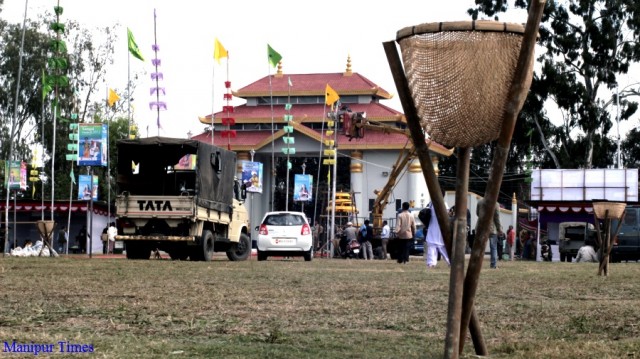 From shelf to tent houses to every erecting pillars of colourful exhibit, bamboo works did the magical note of the last Sangai Festival of Manipur. Professional from tent house business set ups were engaged for 10 days ahead of the festival.

With equal measurement and dig ups the work carried on with another team transporting the Bamboo materials from various places to the work site at Hapta Kangjeibung.

Tin sheets partitioning one stall from another were warp with white and other colourful clothes to make the festival auspicious. From digging deep holes in erecting the green chop off bamboos to binding knots like Paya kiba and assembling structure. It was indeed an interesting one to witness the fine touch from the professional bamboo tent makers.

The firm and rigid bamboo pillars hold a bamboo roofing structure which supports tin sheets for sun proofing and room look favourable for an attentive display of products. The skeletal structure of the big tent houses were all made of bamboo in different form like Paya – tying two bamboos together, Wachet – which binds tin sheets in a pattern.

Self-assembling stalls, making racks, for the material display by participants were another feature witnessed in the making of the Sangai festival, 2012. The participating public has done their best in making the festival a successful one. Sense of volunteerism and skill among the public had garnered the full preparation of the festive stalls. Some are seen making racks with woods, ply board and mostly by bamboos.

Even the women were seen nailing the frames and making it last for the ten days.

The art of making bamboo tent houses commonly practiced in Manipur with abundant natural resource was a handy tool in making the Sangai Festival a successful one.

There are alternatives with iron poles which are practiced by non-bamboo growing States. In the case of bamboo less manpower is required in erecting the tent houses. Mention may also be made that the bamboo utilised in the tent making are recycled and could be used again for the same purpose or other for a durable period of time. Tin sheets roofing is very compatible with bamboo work and the same is in practice since time memorial in Manipur.

Though a natural resource it is grown abundantly and takes a much shorter period of time in maturing than the woods. It is often said that, “ it takes 3 years for a bamboo to mature and 30 years for a tree to mature “ The case of deforestation and climate change in the State could be resolved if we started using Bamboo wherever possible, as it takes a much shorter time in recovering the chopped down natural resources for our needs.

In the recent visit of President Pranab Mukherjee kilometres stretched wooden fencing were erected. It is done almost every time a national leader visits the State. And if we can replace the same with suitable bamboos the cost factor and deforestation could be done away. The practice will be a welcome one by many.

In fact the tourism festival visited by international delegates was erected by bamboo and it is time we feel and realise the magic of Bamboos grown in the State.

Without bamboo works the Sangai Festival would have been impossible.