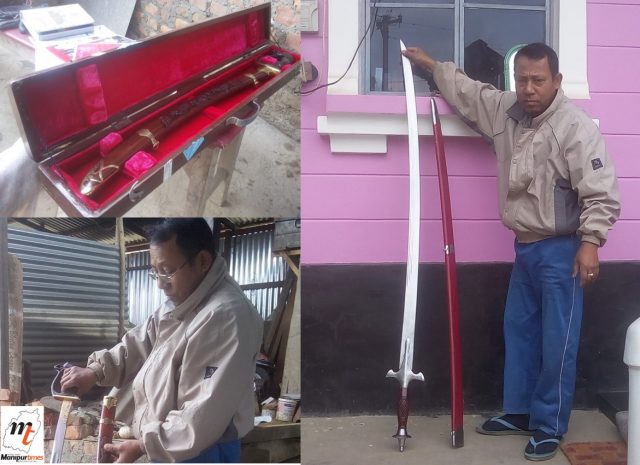 Gifted with the artistic talent of forging intricately carved and highly sharpenedswords, particularly the legendary Katana swords which were once worn by the elite Samurai warrior class of the Japanese society, Manipuri Leishangthem Jayanta continues to work silently at his work shed located at his residence to forge replicas of distinctive art work of swords and daggers.

Born at the Imphal locality of Wangkhei Thangjam Leikai, which is traditionally renowed for forging combat swords and kitchen knives for more than 500 years, the 62-year-old acquired the art of forging hand-made swords, daggers, daos and kitchen knives from an early age from his late father and “as long as he can remember.”

Interacting with Manipur Times, Jayanta said he has not received any formal training to learn his craft and that it ratheremerged from his passion for forging knives that were once very popular in the state.

In recognition of his art, the Commerce & Industries presented Jayanta a state award (Iron Craft) in 2013 but prior to and beyond that the sword smith has not received any assistance from the government.

On the other hand, while applying for assistance for any scheme, Jayanta’s application has bounced many times as there is no category for his craft as it involves both handicraft and metal craft.

He is much confident that if concerned department creates a platform for him as well as those involved in the same trade, the state too can produce knives on par with global quality and bring revenues for the state too.

Making comparison, Jayanta says “if the government’s gives then same attention to ironsmiths as provided to promotion of bamboo-made items, they can reach a level as the art of forging swords is traditionally handed over down the generation from centuries.

In the eighties of the last century, many people in the state were amazed and loved when he started forging daggers similar to that of those used by Hollywood actor Sylvester Stallone in his Rambo movies. Instantly falling in love with the design and shape of the dagger, he started forging replicas and became a hit with many purchasing at the rate of Rs 1000 but in time it gradually diminished from the public memory.

Driven by passion of daggers, the father of two, over the decades further explored the world of swords during which he came across the most famed sword in the world – the Japanese Katana and the smaller dagger of Wakizashi – the two legendary Samurai weapons, known for its artistic beauty and sophistication.

The difference however lies in the fact that with iron ores hardly available in the state any longer, Jayanta just as his counterparts has to resort to usage of vehicle parts to serve as the raw material of forging his swords, daggers and kitchen knives.

As for the high price, he explains that the real reason behind is mainly because of the hard labour and time required to make it. It sometimes takes more than a month and endurance of working 9 hours to finish one fine replica of such artistic swords and dagger.

However, things changed after the man got married when he reached his thirties and the prior enthusiasm on his part took a little backstage as he has to focus on forging traditional Manipuri kitchen knives to garner a livelihood.

“The need to earn and provide education to my two children and maintain my family became more of a priority although the passion remains intact within me” remarked the sword smith adding he now forge artistic hand-carved swords and daggers only when he receives orders from potential buyers, both from the state and outside the state in the mainland part of the country.

Price of his colourful Japanese swords, daggers and those which has fine minute carvings ranges starts Rs 6000 for the small daggers to Rs 15, 000 for the longer swords, said Jayanta. Unfortunately, the demand as well as potential buyers have declined a lot for such long swords due to lack of marketing mechanism by the government.

Though the arrival of better and more sharply edged steel knives in recent times, majority of the people including the elite lot in the state have not discarded the traditionally forged kitchen knives and axes for chopping trees, butchering animals for meat and periodical making of swords that are often used by those involved in Manipuri martial arts of Thang-Ta, Wu-shu players and those ordered by the Sports Authority of India, Imphal.

The man currently sustains his livelihood by making at least five to six traditionally used knives, known in Manipuri language as “Arangpham Thang” for which he has to work the whole day and selling it at the rate of Rs 250-300 per piece.

The knife is mainly used in religious ceremony by ethnic Meitei of Manipur. Another kitchen knife locally known as Sori continues to be in demand and Jayanta to sustain his family’s livelihood has to make it in bulks which are then sold in the largest women run market- Khwairamband Bazaar, in the state.

Jayanta ever since he started making artistic replicas of swords and daggers and beginning 1983 has made over 2000 of these although he has made more than one lakh of kitchen knives used by locals.

Even though many people in the state uses locally made knives, Jayanta is quite certain that the art of forging knives at the traditionally established knive making localities of the state is gradually diminishing and will sooner or later disappear if measures are not taken up by concerned authorities and appropriate intervention by the government.

Lamenting that there is no platform and any measures to preserve this dying art form, Jayanta has in his mind to conduct training workshop at different localities where interested children and others can learn this ancient craft so that it can be preserved down the generations. However, financial constraints have hindered him to pursue his objective.

So much is the man passionate about forging swords, Jayanta in 2014 made a 5.10 feet long sword which weighs more than 3 kilograms. The sword with all delicate designs comes with cover made of leather, wood and plastic items was first displayed in the 2016 edition of the state’s largest annual Sangai festival.

The love of the swords also developed a philosophic outlook for Jayanta. He thinks that rather than left lying in his residence, it would be better for it to display in the state museum for all to see and as a memory for the future generation, that there once lived a man named Jayanta who desired to preserve the ancient art of making swords by the Manipuri ironsmith since time immemorial.

However, he is willing to sell his ultimate legacy to interested sword collectors in the world.