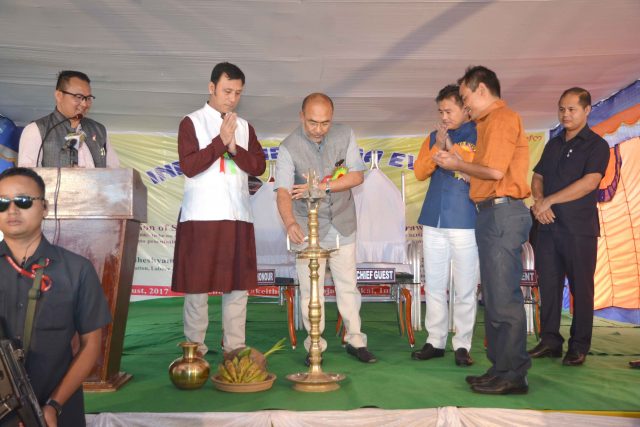 RS. 35 CRORES TO BE SANCTIONED UNDER THE “STARTUP INDIA” INITIATIVE

Imphal, August 31, 2017 (DIPR): Chief Minister Shri N. Biren Singh said that encouraging and promoting the local entrepreneurs would not only improve the State’s economy by exporting our products but also to become self reliant, self sustained market economy and generation of employment. This was stated by him at the ‘Romi Industries Mega Event, 2017’ held at Kwakeithel Thounaojam Leikai, Imphal.

Speaking as Chief Guest of the function, Chief Minister Shri N. Biren Singh said that the State Government has already earmarked a budget of Rs. 35 crores in the State budget under the “Startup India” initiative to encourage the local entrepreneurs of the State. Under the leadership of Prime Minister Narendra Modi to encourage entrepreneurship in the country, the central government has already started “Startup India” campaign aimed at promoting start-up ventures to boost entrepreneurship and encourage start ups with jobs creation for the unemployed youths in the country.

Chief Minister urged the unemployed youths of the State to become job creators instead of becoming job seekers and should not be craze for white collar jobs. We don’t have to think only of commercial or profit oriented view but also to work towards the welfare and prosperity of the State, he said. The government would introduce policies and programmes to encourage the entrepreneurs of the State. He also urged the banks to encourage the local entrepreneurs and start-ups by providing financial assistance for their venture. Public service is the foremost responsibility of the present government, he added.

Skill development programmes have been embarked by the state government to meet the aspirations of youth through training to enhance employment avenues among the unemployed youths. Moreover, such programmes enable livelihoods, increase productivity and income levels of people in the state. Proper planning and maintenance is very much needed to uplift and growth of small scale industries in the State, he added.

Appealing the youths of the State not to lose hope, Chief Minister said that the new government is ready to help, encourage and promote the local entrepreneurs in every aspect.

Mentioning that one of the objectives of the new government is to bring positive change in the society, Shri N. Biren Singh said that proper time and money management would definitely bring development in the State. The government need the support and co-operation of the people, he added. To bring peace and inclusive development in the State, Chief Minister stated that the present government would not compromise on any issues or situation which affects the integrity of the State and creates conflict among various communities living in the State.

Hailing the efforts of the Romi Industries for becoming a successful entrepreneur in the State, Minister for PWD, Commerce and Industries Shri Th. Biswajit said that such entrepreneurs should be encouraged by the people of the State which not only promote our local goods but also provide employment to many unemployed youths of the State. Mentioning PM Narendra Modi’s initiative of ‘Khadi for Nation, Khadi for Fashion’ for promoting the handloom sector of the country, Minister said that the State government would take initiative like ‘Khadi for Manipur’ which would promote the unique handloom products but also to help the weavers of the State.

Shri Th. Biswajit said that the State Cabinet would decide regarding the introduction of handloom products as uniforms of government educational institutions in the State from next academic session soon. He said that the medicines such as antibiotics would be manufactured under the initiative of Commerce and Industries department on the PPP model or joint venture in the State soon. He further said that if we want to bring positive change in the society then that change should start within ourselves.

Minister for Education Shri Th. Radheshyam said that the government would promote and empower the local entrepreneurs in all respect especially to bring growth and self-sustain economy such as self-employment and setting up of small scale industries in the State. He said that the objective of ‘Sabka Saath Sabka Vikas’ is to bring an inclusive development with a collective effort towards the improvement of the most deprived and downtrodden sections of the society.

Stating that market is all about demand and supply, Minister said that at present, a collective brainstorming is needed on how to create demand and at the same time we have to introduce online marketing and create our own market to increase the economy.

On the occasion, a factory and a showroom of Romi Industries was inaugurated. The dignitaries also launched the Romi shoes for the school goers.

A prize distribution ceremony to the schools that have produced at least 10 position holders upto the rank of 25 in the BSEM HSLC examinations 2015-16 and 2016-17 was also held during the function. Tiny Tot’s Unique School, Imphal and Nirmalabas High School, Imphal received a cash award of Rs. 40,000 each with mementoes. (DIPR)