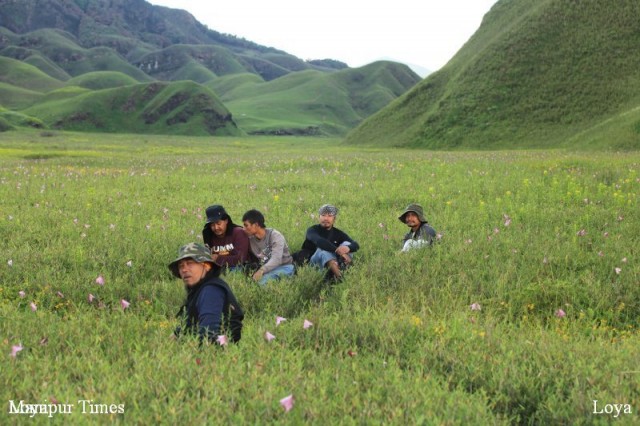 Well time to pack up. The journey back home from the valley known for its natural beauty, seasonal flowers and wintry snowfall. Dzuko derives its meaning from the Mao/Angami word which translates to “Cold Water” referring to the ice cold stream that flows through the valley.

Dzuko Valley is 2438 m above sea level and is located at Manipur and Nagaland  border. Majority of the area belong to Manipur side. However due to rock cliff terrain the entrance point is more convenient when one plan to trek from Nagaland side.

The pathway from Manipur is there with a well-developed base camp at Mao. Inconvenience is that one has to cross Mt Ishro (Mt Tenepu) the highest peak of Manipur in reaching Dzuko Valley.

We decided that we will stop at the Guest house and start off early morning from there as we have a long way to cover till the passenger vehicle point at Vishwema. Afternoon was the best time to set out and we still have few hours to spend in the Valley.

We came across some high school students who have come to trek the valley along with their teacher from Baptist High School, Jalukie, Nagaland. We guided them to the Dzuko Lily point adjacent to our cave as we collect wood for the kitchen. We see more students and youths coming from Nagaland to trek the valley. Some of them came through Kisama which is shorter route than Vishwema. They just get up and return the same day. Well that was amazing and quite a walk through very energetic of them.

Well five of our team member will be staying back for another two days as they have planned. Tents down, mats rolled up, bags tucked, light refreshment before we set out for the Guest House which is an hour trek crossing few mounts.

A group picture at the cave and the wooden bridge across the stream. We all shouted ‘full power’ which became a popular chant as we were captured in the digital memory of our cameras. It was enchanting to walk the mighty valley surrounded by regular mounts with uniform bamboo shrub.

Our luggage was little lighter, 3 kg of rice and another half kg of edibles which we carried along with us were consume during our stay. Moreover the last addition of firewood from guest house we carried in our hands and back were missing.

Well stay in the guest house per head cost us few amounts but it was good. The night was cold outside as it is in a higher elevation. When we reach the guest house Jackson was missing the camp and shouted aloud to our team who stayed back. We might be around 4 kilometres apart in displacement distance but amazingly our voice was answered. “ Chak Thongabro’ shouted Jackson a guitarist in a metal band. It was echoed as the adjacent mountain resounded few moments later and we heard ‘Eromba Thongae’ from the valley. Well that was awesome, Jackson’s metallic instinct has given the whole team a thrill and a moment to remember. We never know it was possible until Jackson give a try mounting on a chop off tree. We Phantom text for few moments and resume the night with warm rice beer to beat the cold. The canteen at the Guest House is little costly almost double the price as it takes lot of labour to ferry the goods.

We bought all the cooking items except for rice from the canteen. With hired utensils a kitchen was provided and we munch the dinner at the resort like wood structured Guest House.

The evening was warm with good talks as Kiran Kumar Lamabam, president of WAHPS initiated a talk on how you find yourself in becoming a part of the organisation. Well WAHPS is responsible for bringing up Punshilok forest at Langol hill range from a barren land to a thicken forest with variety of priceless trees and plants.  And most of our trekkers are associated with the organisation. They have been nurturing, protecting the forest and giving their best volunteerism towards a greener Punshilok.

Early morning 5 am we started off, our steps were slippery with dews on our path. A row of colourful ants’ line up with backpacks for a journey towards home. As we walk through the sunlight peeped us for a while from the other side of the mountain until it stands up atop to gaze us calmly.