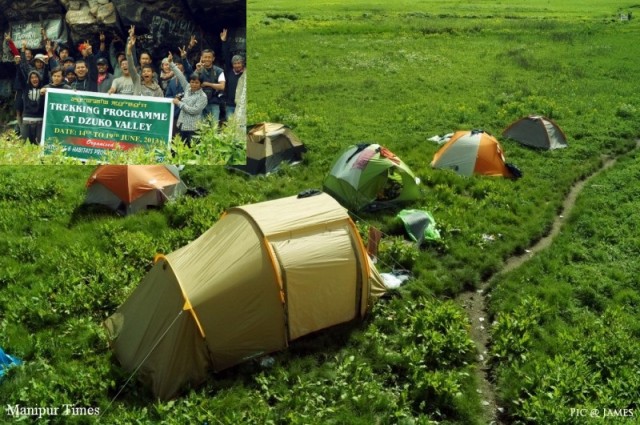 Eleven of us were travelling in a Tata Winger which we had booked for our travel. We stopped at Mao for lunch. We then reached Vishwema  (Kohima) from where we would be entering Dzuko Valley.  Two Tata Sumo took us through an uphill road which would be almost 8 km in distance.  We then trekked along the valley with luggage weighing almost 13 kilograms which became heavier with every additional hours of trekking. The trip was guided and mainly sponsored by Wildlife and Habitat Protection Society (WAHPS).

The forest was dense and misty. And the weather was pleasant when we start trekking at around 1.30 pm. It was if we were ants trekking along the trail along with our backpacks.  The trail was tiring but there was a strange zeal and excitement with each of one us trekked along the unending path. We drew lot of strength from the nature we were in.

Every minute we witnessed the beautiful nature that was endowed in the valley.  Green mosses on tree branches, flower plants and different landscape, it was an unending sight of pure beauty.  After one and half hour of uphill trek, we came across a rock step which was built as an initiative of the Nagaland Tourism Department. There were around hundreds of rock steps and it was built on a steep area.

It was a steep climb for us. Trying to balance our backpacks as climbed these steps was difficult. Standing by at the rock step, we would try to gasp for air and try to regain more energy to climb further. Nevertheless, it was exciting to cover the rocky climb.

We reached a height after the rock steps. It was a beautiful sight when we came to a parallel path. The steps were softer as we put our weigh on we felt the softness of the mountain. Perhaps the rocky step made us feelthat. We felt immense joy and thrill as we got nearer to the valley.

We stopped by at a water point. Beside a cliff from where we got a view of how high we had climbed. We saw thick forest downhill and ranges of the mountain at the other point.

We collected stream water and rested for a while. Refreshed and with regained energy we started trekking the parallel footpath across the green hill. We soon saw the most astounding sight that bedazzled us. All in a uniform colour and covered with tiny green bamboo. It was like the silhouette of a beautiful woman. We saw unending valley which was vast and green. As we walked by the green valley, we were rejuvenated.

“One, two, three,” shouted each one of us counting the trekkers till the last man. It was fun and we had a good laugh when one shouted 11 in a funny accent. We were happy and each one of us was thrilled. Some among our group had already visited the Dzuko valley.

Our next destination was the guest house. It took us nearly an hour to reach it.  And as we trekked back, we saw the valley when the dusky sun gave a highlight of the valley and my brother shouted there is the valley.

Trekking at Dzuko Valley Part I Galley
1 of 21

We walked downhill for another half an hour with the firewoods. A part of the group headed off to occupy the central cave and set up things while some of us rested for a while at the guest house. Torch lights in our hands, some with headgear lights, we started getting down. We showed the light in the tent set ups. A loud shout and a response from the other end was the only communication we had. A regular blink from our torches along with our shout tracked each other as the night set in. it was slippery as dew drops filled our path. Our trousers were wet as we treaded the path.

Two juniors came to greet us they have reached the place earlier. I forgot to mention here that 11 of our team had also left a day earlier and they were trekking from Manipur side crossing Ishro peak or Mount Tenepu the highest peak in Manipur. It was helpful of our juniors to carry our luggage for some 300 meters.

The central cave was a good shelter in the vast valley. It did not have a deep opening but we could have a good kitchen and a shelter for some 7 people to sleep over a bamboo shrub mattress spread across the foot of the cave.

We erected tents near the cave and set up kitchen at the rock cave. Dal mixed with tin fish and rice was the menu that night. Some of us had to fetch water from the river.

There was lot of lightning and no shower or thunder. The night was not the same the next night but the sky was clear with bright stars.

And as we woke up and got out of our tent, we witnessed most beautiful morning we have ever seen in our lives with thin layer of dew drops and a shy sun trying to make way among the curves of the green mountain.

The river we walked last night was nearby but the night made it seem distant. Things became clearer and after a good sleep we all felt like exploring the valley.

The running stream seemed to greet us when we got near to the river. We then freshened up and had breakfast which we carried on our bags and gathered at one place.

After a good rest some of them took the duty of cooking food and the exploration started where we came across many amazing places.