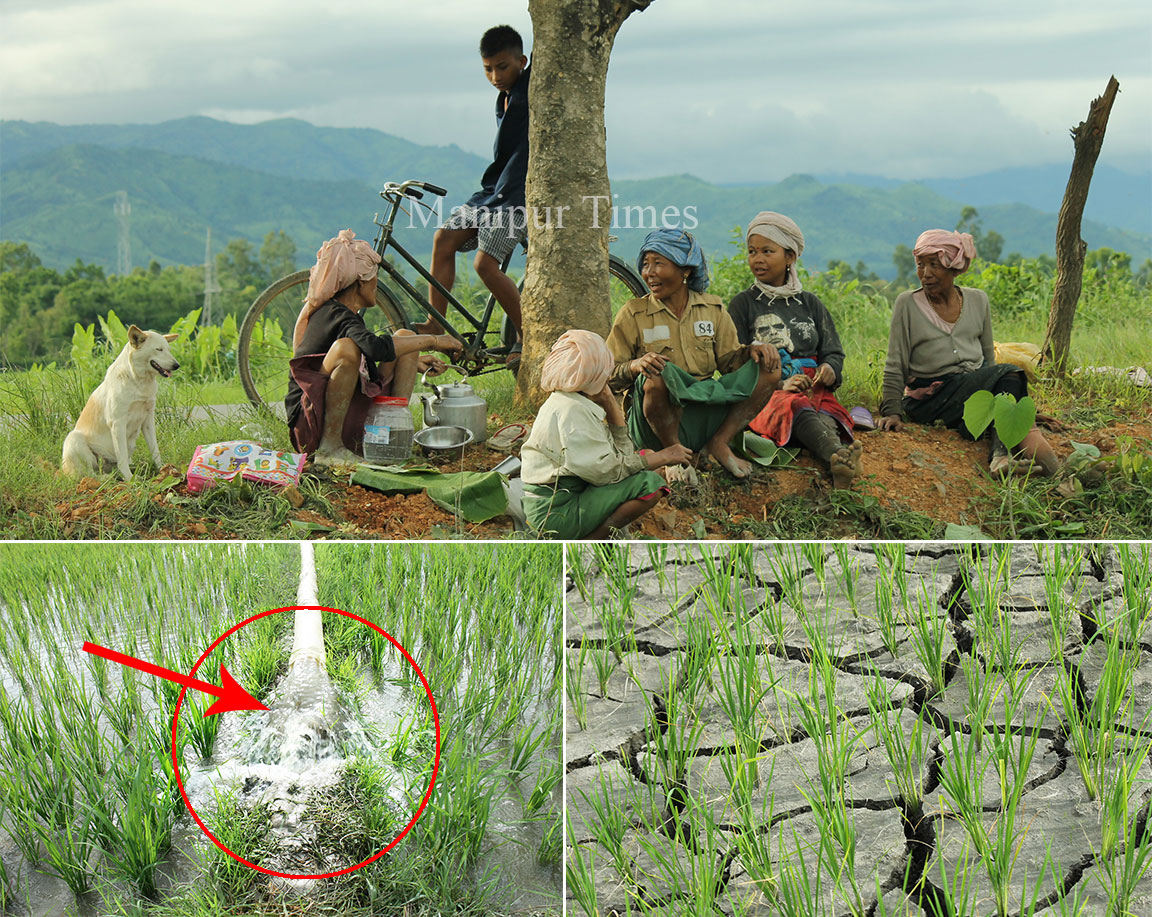 In Manipur the year 2014 marked a significant change in the environment as scarcity of water had hit the State in two occasions.  It was during spring season that Major River dried up and Singda Dam which supplies potable water in Imphal Area marked a bottom level.

The State use to experience good rainfall starting March month but on the contrary very hot sunny day runs throughout the months and water bodies dried up. The cost of a thousand and half litre water went up to as high as Rs 800. Construction works were put on halt, there was no luxury water to even wash clothes. It went for about a month and luckily there was regular rainfall and the State slowly recovered.

But then in July the time when farmers have planted their rice plants and submerged their paddy field with water from regular rainfall the monsoon rain played fault and the paddy field wore a devastating look with big cracks all over.

It was the time when farmers need more and more rainfall for the rice plants. Some of the late farmers have to extend their seed sowing time due to water scarcity. Yet many farmers spend their days looking up the sky or wishing a shower as they fall asleep in the night.

Manipur Times team visited Yumnam Khunou under Bishenpur District and met some of the farmers working in their paddy field. From their story we get to know how farmers of the State must be suffering when climate change hit their day to day life.

Loutongbam Ibopishak of Yumnam Khunou Mobile Tower who is a school headmaster at Yumnam Khunou Added Junior English School was pumping water to his paddy field from his pond.

“If water is not pumped at this point of time the soil will harden and give crack. There will be no value of the fertilizers I have put few days back. Neither there will be any meaning for the plantation without water. I was so helpless so I pump out all the water from my own pond for the paddy field. I have been running from early morning at 6 am and I have to skip my school today. I took leave. Half yearly examination is going on at my school. I thought it is necessary to give attention to my paddy field too so I took leave.

Since there is no rainfall not only our area of Yumnam Khunou but rest of the state farmers are suffering.

There is no happiness over the plantation neither there is no tension for those who are yet to sow seeds in their paddy field. We never know whether we will reap or not at this time. This is the prevailing situation in Manipur.

There are rain bearing clouds hovering in the sky but it failed to rain. Even if rained it rain very thin and in limited area. I heard there was a heavy rainfall in Imphal area yesterday. It rain in an area where there is no cultivation. But it has not rained in our area where thousand thirsty rice plants awaited.

Supplying water from the pond is very temporary. We need rain from the sky. Rain water is more favorable for the plants.  I was water pumping my paddy field as a last means fearing if I would not yield crop this time.  This is the struggle of farmers.

At one time when Moirang Koireng was the Chief Minister there was double cropping for three years. All the paddy field in our area did double cropping with the help of canal irrigation. High canal, low canal and tributary canals were dug up for irrigation during his tenure.

But there is no meaning of having a high canal or low canal in our area nowadays. It is all wasted. Even the land is wasted. As there is no supply of water the land owners have leveled their tributaries.

There is scarcity of water. If the present government rework on the canals the farmers of this area will not face much trouble in irrigation.

We are facing difficulty at this point of time”, deliberated Ibopishak.

They spoke, “ Last year it was not so and we have good yield. It will be very uncertain for the rice plants if the rain did not come in time. If my paddy field is in the interior we use long pipe to push water. Everyone is using the facility.

Our duty is to pull out the weed and arrange spacing between rice plants. This time most people sow seeds than planting the grown saplings in their fields as the water logging in the field was short span and the soil is not favorably soft.

The harvest will be less we even fear that it will not bear rice if the rain does not come. We are only three months behind the harvesting. Moreover some rice varieties could be planted now as it is late.

Yumnam Khunou is a low laying area there is flood now and then but this year everything is contradictory.  Khujairok maril  (river) is dried up as many farmers have drawn water from the river for their paddy field.

Hiring of the grand water pump meant for drawing water costs us Rs 200 an hour. Since many started drawing water from the river no water runs in the river now.  Even the small canals are also dried up. Yet there has not been enough rainfall and everyone is worried” .

Few days after the visit on August 3, 2014 there was a heavy rainfall in the night and the water harvesting in Imphal area amount to overflowing of a thousand liter water tanks. Medium rainfall prevails for consecutive three days and all smile for the farmers yet they have suffered for weeks. Huge money were spent on efforts to pull in water, instance of hiring labour or fertilizing works have to be doubled for certain farmers. Yet there is a fear that the yield will be less.

Despite scanty rainfall farmers of the State have put on their best efforts, now it is the third week of August rice plants are submerged in the water as there is water in the paddy field with adequate rainfall in gaps. However if the rain fail to continue in the days to come the State is going to suffer as it rely on natural rainfall than a proper irrigation system to channelize water from dams or river, neither there is no other method of water storage, harvest or supply like Tube Wells.

Relying on almighty God may end up to food scarcity one day. There has to be some man made intervention to curb the water crisis in the plantation sites.