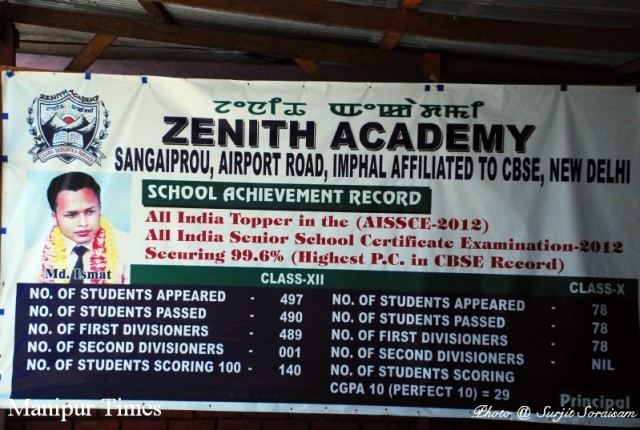 Zenith Academy is a progressive child centred, co-educational private school committed to providing quality education for its pupil. It is founded by N. Manaoton, former Lecturer, Jawahar  Navodya Vidyalaya (JNV) and writer of Mathematics Text Book, Board of Secondary Education Manipur.It was established in 2005 but officially recognized and registered in 2007. Zenith Academy is affiliated to the Central Board of Secondary Education; New Delhi under affiliation No. 1230032. It began with a concept to bring up the students with moral education along with academic knowledge and, it is autonomous and run by a trust.Lowest and the higest grade in the institute are Class VII to Class XII. Achievement:
1.         All India Topper in AISSCE-2012 (class 12th examination)
2.         First to Fifth Position holders for the whole North-East Region in AISSE-2012 (Class-10th examination).
This school is located at Sangaiprou, Airport Road, Imphal, Manipur, maintaining the proper educational atmosphere. Recently it has been upgraded to give students a wider scope of choosing different subjects in Science, Arts, and Commerce and Vocational Streams for 11th and 12thstandards.
Altogether there are around 1200 students in the current academic session. Zenith Academy also provides hostel facilities for boys. The hostel is located within the premises of the School.
“Aim and objective of Zenith Academy is to show the people the highest point of vision to the student and to convert them into reality. For that they provide the students the opportunity and positive environment through which they can achieve their goal exploring the potentials in them. We aim to impart them the best quality education with modern techniques. Education is a lifelong process. So, along with the academic carrier we encourage them to think the originality independently” says N. Manaoton.
Right after the completion of his M.Sc in 1991 and B.ed. N. Manaoton got job at Jawahar  Navodya Vidyalaya (JNV) for the Lecturer Post. He was posted at places i.e. (i) Jawahar Navodya Vidyalaya, Juwai, Meghlaya, (ii) Khumbong Jawahar Navodya Vidyalaya (JNV), Imphal and  (iii) Jawahar  Navodya Vidyalaya, Bishnupur as Mathematics lecturer till 2005.
As a Lecturer he spent some years teaching.  In 2006, he acquired a job in Board of Secondary Education, Manipur and work as Writer of Mathematics text book for Board of Secondary Education Manipur (BOSEM).
He resigned from Jawahar Navodya Vidyalaya (JNV), Central Board of Secondary Education, and New Delhi the same year.
“When we want to do something, the concern people would not respond positively and they are always hesitant. The only option to work under such conditions is to stick with their plans. So I was not allowed to do what I wanted to do. Then I decide to establish a school by my own”, N. Manaoton said.
Establishing the school for him doesn’t seem difficult because he has the potential and he is an experienced faculty in different manners like Setting Questions for CBSE, BOSEM,etc. Writer in Mathematics Text Book for Board of Secondary Education, Lecturer for Jawahar Navodya Vidyalaya (JNV)
N. Manaoton did not enjoy much of his working days as a government employee  because he felt he has better dream.So he started his own.
Zenith Academy Founder, N. Manaoton said “First step to a true Education is Pure Heart” so, we let our students keep a pure heart for a better education. We provide them the best education so as they may become a better individual for a better society. To be able to impart better education to the students, N. Manaoton taught his teaching staffs the better method or techniques of teaching, evaluating, question settings and different patterns of teaching.
Most of the teachers teaching in the Zenith Academy are his pupils whom he had confidence.
Teaching the students in the school and just simply letting the them go home is not enough. Most of the teachers now a days are not doing well even in the class because they are working just to exempt his/her duty and some teachers are there who think about tuitioning the students in their own time to earn extra so they don’t want to teach well in the class thinking that the students will come to them for tuition.
What I do in my school, I divided the students into 3 groups i.e. first grade, second grade and third grade. Telling the students ‘go home prepare for the exam’ right after the session is enough for every student. So producing a topper or quality education is far beyond our reach. So I classified and arranged them as per according to half yearly exam and record submitted by the class teacher then I categorized them into three groups.
Students with higher potential I placed them in group (I) according to the capability of the pupils I rearrange them and spent extra time with better faculty even from outside the State. For the weakest group, I engaged some special teachers and spent for about 2 to 3 months.
So they teach separate teaching to the weaker, average and excellent. For the excellent too, I hired best teachers from inside and outside and give the students a supper special type of teaching. We have to spend at least Rs. 50,000 for a teacher per month. 50% from the parents and 50% by myself. In addition to the normal learning process they are provided with different additional learning methods.
Even after all these processes, 5 best students will be finally selected from the excellent list, for the 5 students selected I  treat them as best and give them revision of the syllabus by chapter to chapter including how to write ( handwriting skill) what to write and what to do, if they cannot complete the whole answers during the exam hour.
For five best students selected in first category I am doing my best by giving extra time and money because they are the targets. 612 students appeared in the current year class XII examination and five students were selected and they stayed in the school resident. N. Manaoton narrated.

It is an emotional moment when we share story about Ismat, who stood all India topper in the CBSE, 2012.

When N. Manaoton was told about Ismat by one of his students and a close friend he called Ismat over phone and talked requesting and offering chances to continue his study as some unavoidable circumstances was likely to make him discontinue his study. Ismat first refused however N. Manaoton convinced him to take appointment to meet him. With counseling and explanations about his bright future Ismat continued his study.
The bright boy stood first class first in CBSE, 2012. The achievement was a big one as he became All India Topper and Manipur emerged to hold a niche in the educational excellence in CBSE Exams.
Zenith Academy is the first tremendously achieving CBSE affiliating school to produce all India toppers in Manipur. “Zenith is genius as its name”. With tireless effort, work generously with heart of charity, N. Manaoton dedicated his life for the people especially for the growing youth and for the growth of the society. Students from outside Manipur now started seeking admission in the school and some have already accommodated in the recent years.
N.Manaoton is a strong-willed man who doesn’t want to work under a supervision of a Master and thus is a self-mastered man till today. Whatever I do I want to be the best expressed  N. Manaoton – the founder of Zenith Academy.