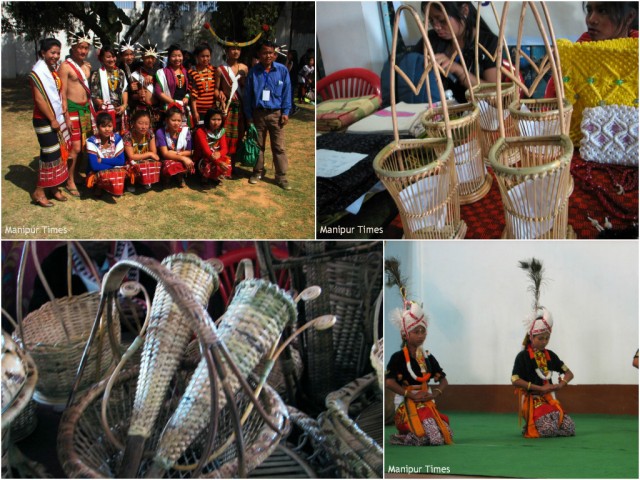 The festival was interactive and shapes the personality of the participants. The zeal of excellence surrounds. There was energy in the youth and for the audience there was a lot of learning from various programs they are exposed to.

Products displayed by localities from across the district ranges from indigenous stuffs like flowers made of maize leaves in a beautifully colored and designed way. Traditional wear of various communities in different stalls. Pickles, local made soaps, mats, bamboo products, pots and local specialties are some of the varieties one can see during the three day festival. Among the stalls judges screened and rated the top ones for prizes which is very encouraging as it helps gear up special interest in self earnings.

The festival was organized in such a way that the programs are shaped to instill in the mind of the youth that self sustenance is very important if they have to chalk out a way of earning at the time of helplessness. It also enhances the local products and the significance of more economy through indigenous products. If not seen in day to day life of clubbing together of various local products the festival was one such event where all the districts displayed their unique products one at a time. In that way the festival was unique.

Jackie Ruivah Zonal Director, NYKS Imphal Zone speaking to Manipur Times expressed that there are altogether 3391 numbers of Youth Clubs and Mahila Sangathan affiliated with the Nehru Yuva Kendra Sangathan Imphal Manipur Zone. District wise it is 547 in Churachandpur, 460 in Imphal West, 445 in Kangpokpi, 268 in Tamenglong, 287 in Ukhrul, 466 in Thoubal, 255 in Chandel, 241 in Bishnupur, 250 in Senapati, 172 in Imphal East.

She expressed that the main target of the programme was to create State wide opportunities for optimal participation of youths especially non student rural youths. Our main objective is to involve the rural youth in nation building activities and to help develop skills and value in them with which they should become productive and responsible citizens of a modern secular and technological nation she continued.

Nehru Yuva Kendra came into existence in 1972 and became an autonomous body of the central government in 1987 and is permanently functioning under the Ministry of Youth Affairs and Sports Government of India.

Tight schedules and energetic program marked the events. Ministers and MLA’s visit and interact with the participants and for the youths the festival is indeed a happening one with many organized schedules.

The stall owners do have a good time selling their products and winning prizes and recognition for the best exhibits.

Youths attired in traditional dresses perform before the Judges who are renowned in their own field. The first day began with a convention for youths where resource persons spoke on social cause and usefulness of local clubs and an individual’s responsibility towards a locality.

Representatives of Institute of co operative management delivered the youths who came from across the districts on the courses the institutes provide like management, personality development, entrepreneurship skills, multimedia, etc.