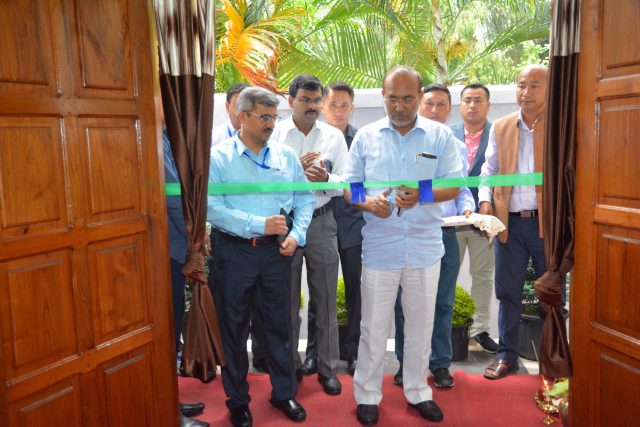 Imphal, May 15, 2017 (DIPR): Hundreds of people turned up to take their grievances to the notice of Chief Minister Shri N. Biren Singh on the first ‘Meeyamgi Numit’ held at Chief Minister’s Secretariat today.

The Chief Minister attended to as many as about 350 complaints personally and met nearly 1000 people from 10 am to 5:30 pm.

Despite bad weather, people gathered in huge numbers at the gate since early morning to get inside the CM’s Secretariat complex.

On the other hand, the CM’s Secretariat made elaborate arrangements for the convenience of the general public.

A huge CGI-sheet roofed makeshift Mandab (hall) was constructed at the parking space located inside the complex where adequate seating arrangements, water, tea and snacks were provided to the visitors.

A medical team along with an ambulance were kept ready for any medical emergency at the complex.

Among different issues, demands like appropriate compensation of agricultural land acquired for the construction of Mega Tourist Circuit, Khongjom, enquiry into non-receipt of pension under Indira Gandhi National Old Age Pension Scheme and pension to the former Members of Autonomous District Councils etc.

All the visitors/groups were issued tokens having serial numbers and called in inside the newly constructed annexe building where the Chief Minister was meeting them one by one.

Chief Minister Shri N. Biren Singh said that the Government decided to organise ‘Meeyamgi Numit’ on the 15th day of every month in order to identify the wishes and aspirations of the common people who are at the grass-roots level.

He further said that the day was held to maintain transparency and make people understand about the activities being done by the new Government.

The Government would listen to the grievances of the common people and study what could be done and what not, he added.

The Chief Minister informed that he would be forwarding the written representations, submitted by the people, to the Ministers and officials concerned after writing side-notes on it for necessary action.

He further said that a file of photostat copies of all the representations was also maintained in his office so that the Minister or official concerned may be contacted for follow-up action anytime.

Stating that there was a massive turnout because of the wide publicity given by the media, Shri N. Biren expressed hope that misunderstandings between the people and Government would be sorted out, and loopholes on the part of the State Government can also be identified easily if such Govt-public interactions go on regularly.

Maintaining that the State Government is putting in effort to solve the problems faced by the common people at the micro level, the Chief Minister said that Imphal Urban Co-operative Bank Ltd had been entrusted to do the needful including providing loans to the villagers of Kwatha to enable large scale production of Soibum (fermented bamboo shoot).

The Minister said that ‘Meeyamgi Numit’ aims to bridge the gap between the public and the Government. Under the initiative, the public can meet any of the elected representatives on the 15th day of every month and air their grievances so that the Government could act accordingly, he said.

He continued that most of the issues highlighted before him today were related to lack of development in the hills and other development works in different Assembly Constituencies. The Minister met the public from around 10:30am and continued till late in the evening.

Consumer Affairs Food and Public Distribution Minister Shri Karam Shyam also met the public as part of ‘Meeyamgi Numit’ (People’s Day) at his office at Secretariat South Block. Speaking to media persons, Shri Karam Shyam said the decision of the Chief Minister is a noble step and it will help in ending the VIP culture in the State.

The Minister said that the day will help the elected representatives to have close interaction with the general public.

He appealed to the people of the State to take advantage of the day and meet their elected representatives, bureaucrats and top officials and express their grievances.

He also appealed to the elected leaders to extend cooperation to the Government in changing the old political system and hoped that close connection with the public will help in bringing better governance. He also expressed the need for mass awareness against misuse of rice under NFSA.

The Minister today heard many grievances ranging from PDS, relief and revenue matter. A man from Canchipur Langthabal Kunja who lost his house in a fire incident was assured further action as the Minister contacted the official concerned and was given telephonic assurance that the matter will be solved at the earliest.

The Minister met more than 300 people at his residence and temporary office located at RMSA complex, Babupara.

Memoranda submitted by the employees of his departments and complaints made by the general public were attended to on the day. Listening to grievances, he said, he would try his best to reduce the problems which had been brought to his notice. (DIPR)