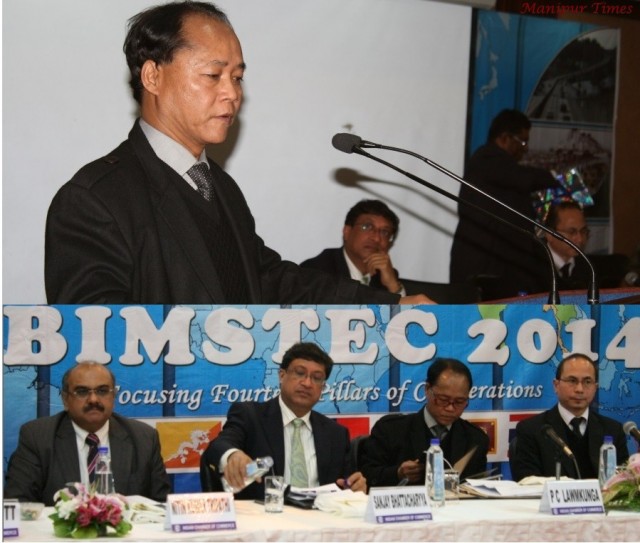 Addressing the inaugural session of the daylong conference as chief guest, Manipur’s chief secretary PC Lawmkunga said that Manipur, a neighbour to Myanmar, is lucky of being on the gateway of South East Asian relations. For the last many years, Myanmar was under a military regime and poor people could not voice against the regime. Since the country became democratic and economic sanction imposed to Myanmar by many countries got lifted, some development in the country are seen now with the help of international relations.

Stating that “development of your neighbour is your development”, Lawmkunga maintained that a country can benefit from the development of his neighbouring country. We are affected when our neighbouring countries are economically, socially poor. The effort of BIMSTEC to promote the priority sectors such as Trade & Investment, Technology, Energy, Transport & Communication, Tourism, Fisheries, Agriculture, Cultural Cooperation, Environment and Disaster Management, Public Health, People-to- People Contract, Poverty Alleviation, Counter-Terrorism and Transnational Crimes and Climate Change with the co-operation among the member countries is a great initiative, said he while adding that we have a long way to go to make this dream reality.

Dr. Nitin Tripathy, Editor–in-Chief of International journal of Geoinformatics and Leader-ICT, Asian Institute of Technology spoke on the Topic ‘Co-operation on sharing of Remote sensing data on agriculture, Environment and disaster management’ while Ms.V Kavita Iyegar, Economist of Asian development bank on the Transport and communication topic ‘Unlocking economic potential through BIMSTEC transport connectivity’, Dr. Jayantha Dias Samarasinghe, Chairman of Shri Lanka council for agricultural research policy on the topic ‘the need of a common agenda for agricultural policy framing to ensure food security in BIMSTEC region. Mr. Sanjay Bhattacharya, joint secretary of Ministry of external affairs, Government of India also spoke elaborately about vision of BIMSTEC during the conference.

During the plenary session of the conference, Mr. Indrajith de Silvia, Deputy director Marketing of Shri Lanka Tourism promotion Bureau spoke on the topic ‘Unlocking huge potentials of Buddhists tourism in BIMSTEC nations:  A need of the hour’ while Mr. Lungtaen Gyatso, Director of Institute of Language and cultural studies, Royal university of Bhutan  on the topic Synergies in the history, art and culture of BIMSTEC  nations: building solidarity as a region’, Mr. Aslam Perwaiz, Head of Disaster Management systems, Asian disaster preparedness centre, Thailand on the topic Environment and disaster management in BIMSTEC nations, Mr. Shahab khan, Research Director, BEI, Bangladesh on the topic ‘Trade facilitation: Non tariff barriers in trade between Bangaladesh and the North east India, Dr. K. Vijayakumaran, former DG, FSI and Principal scientist of CMFRI Reasearch centre, Chennai on the Topic ‘Ecosystems Based Fishery Management in the Bay of Bengal’, Professor Dr. MYo Oo, Immediate past president, P&SM society, Myanmar medical association on the topic ‘health situation in BIMSTEC countries: how economic integration can safeguard public health” and Ambassador Munshi Faiz Ahmed, Chairman, Board of Governor Bangladesh Institute of International and strategic studies.
The Bay of Bengal Initiative for Multi-Sectoral Technical and Economic Cooperation, im short, BIMSTEC is formed by member countries such as Bangladesh, Bhutan, Myanmar, India, Nepal, Sri Lanka and Thailand. The seven-country forum aims to achieve its own free trade area by 2017.
BIMSTEC was initiated with the goal to combine the ‘Look West Policy’ of Thailand and ASEAN with the ‘Look East Policy’ of India and South Asia. So, BIMSTEC can be explained as a link between ASEAN and SARRC. Seven members of BIMSTEC cover 14 Priority Sectors led by member countries in a voluntary manner, namely, Trade & Investment, Technology, Energy, Transport & Communication, Tourism, Fisheries, Agriculture, Cultural Cooperation, Environment and Disaster Management, Public Health, People-to- People Contract, Poverty Alleviation, Counter-Terrorism and Transnational Crimes and Climate Change. What makes BIMSTEC different from other organizations is that BIMSTEC represents one of the most diverse regions of the world, be it the way of life, religion, language, or culture. BIMSTEC has clearly identified issues of development and common concern into 14 Priority Sectors which covers various facets of ‘development’ and the issue of common concern like counter-terrorism and transnational crime. BIMSTEC provides a unique link between South Asia and Southeast Asia bringing together 1.3 billion people, 21 percent of the world population, a combined GDP of around US $ 750 billion, and a considerable amount of complementaries.